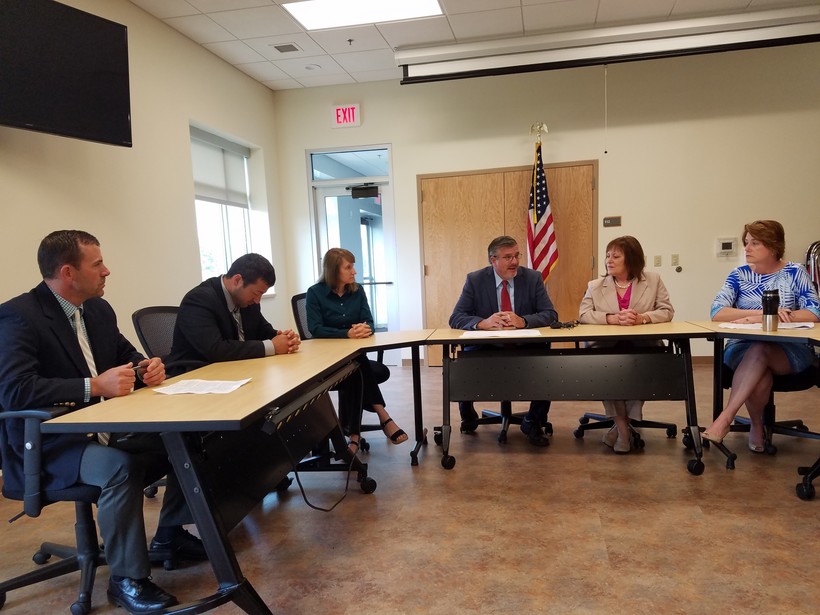 Assembly Republicans and school district administrators held a press conference at the Lake Hallie Village Hall on a new school funding plan being floated in the Assembly.

The politicians were joined by school district administrators who stand to gain from the new plan.

The Assembly funding strategy provides $90 million less in per-pupil funding than Walker's $649 million increase for schools in the state, but it aims to give more to districts who got less state aid on average when revenue limits were imposed 24 years ago.

Nygren said the Assembly plan is a more efficient plan to target districts that are turning to referendums to make up for funding disparities compared to neighboring districts.

Under the Assembly plan, districts across Wisconsin spending less per-pupil than the state average would have authority to raise property taxes by more than $92 million.

That's good news for Cameron School District Superintendent Joe Leschisin. He said they're spending $9,300 per pupil when neighboring districts spend up to $11,000. With 1,000 students a $200 per-pupil difference in state aid works out to up to $2 million, said Leschisin. Because they've been locked in at lower levels, he said the district hasn't been able to afford to offer any advanced placement classes.

"If I had $1.5 million to $2 million more in revenue generation potential, it would make staffing those positions much easier," Leschisin said.

But higher spending districts like the Eau Claire Area School District are concerned about the Assembly plan. School Board member Joe Luginbill called the new plan a desperate, 11th hour attempt to fix a school funding formula that's long been broken. He said the Assembly's funding proposal will cost his students.

"We will lose approximately $1.1 million," Luginbill said. "So, this plan will unnecessarily harm the students in our school district."

Stanley-Boyd School District Administrator Jim Jones sat alongside Nygren and the Assembly Republicans during their K-12 funding plan presser in Lake Hallie. But he also scolded the republican lawmakers for not acting sooner to help districts locked into lower per-pupil revenue limits.