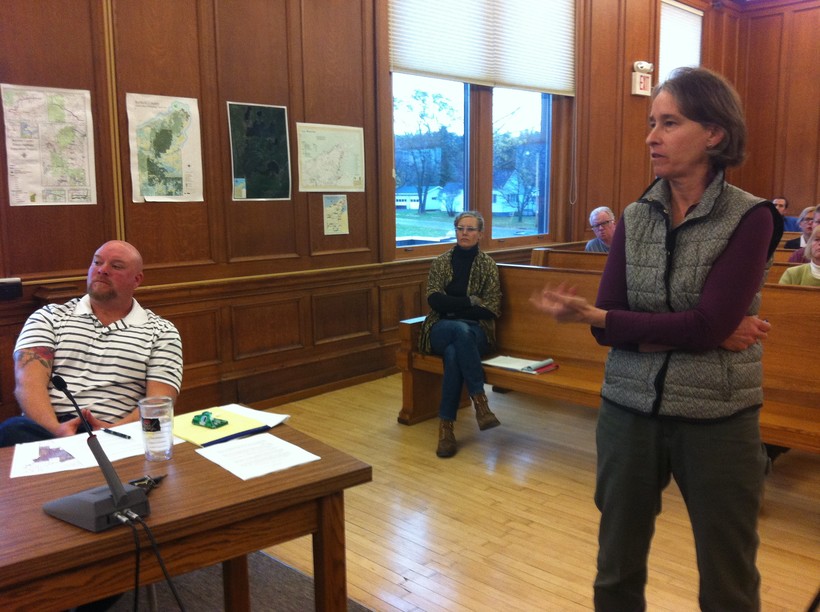 Madeline Gotkowitz speaking before a county committee about the well and groundwater findings.

A report on groundwater and wells near the proposed site for a large hog farm shows that the area's soil composition makes it more susceptible to runoff pollution.

The farm that Iowa-based Reicks View Farms plans to build in Bayfield County near Lake Superior would be the largest hog farm in the state, holding about 26,000 pigs. The company plans to spread roughly 9 million gallons of manure across around 1,400 acres at the site each year by injecting it into the soil.

Wisconsin Geological Survey hydrogeologist Madeline Gotkowitz, who spearheaded the report, said that silt and clay soils in the area offer a level of protection to wells and groundwater from nutrients on the land. However, Gotkowitz said those heavier soils hold water on the surface longer.

"More of those excess nutrients are available to run off to streams," she said.

Gotkowitz recommends the county require or encourage groundwater monitoring downstream and nearby any waste storage areas. She also said homeowners should be encouraged to sample wells and build them deeper.

"Deeper wells are better-protected from contamination at the land’s surface," said Gotkowitz.

Meanwhile, testing of private wells in the area has found safe levels of contaminants in the water, according to a University of Wisconsin-Extension specialist.

Bayfield County collected well water samples for testing from seven towns surrounding the proposed hog farm. The bulk of those samples were from Eileen, the town where the farm would actually be located, said UW-Extension groundwater education specialist Kevin Masarik.

According to Masarik, nitrate levels in those samples were found to be low compared to other wells across the state. He said the samples contained low levels of phosphorous, "well below any threshold that we consider to be an issue for surface waters typically."