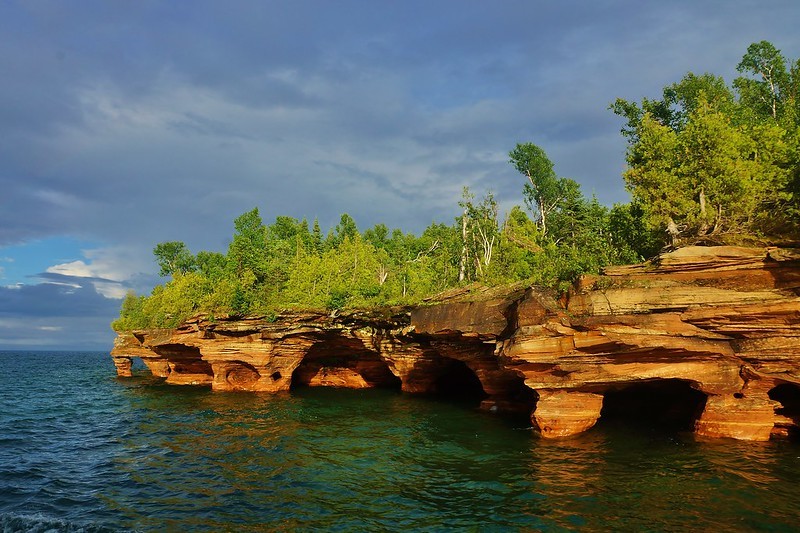 The anniversary kicks off a year of virtual and in-person events to celebrate the islands and their history, said Lynne Dominy, superintendent of the Apostle Islands National Lakeshore. The National Park Service initially planned to hold events starting in March, but those were canceled or rescheduled due to the coronavirus pandemic.

Despite changes, Dominy said the anniversary is an opportunity for people to share and explore their ties to the Apostle Islands.

"There's all these different types of relationships with places like this that are kind of the layers of history and create those personal connections for people about what these places mean to them," she said.

The islands, which span around 280 square miles, include the colorful sandstone rocks that form the cliffs and sea caves that have drawn hundreds of thousands of visitors to its shore. 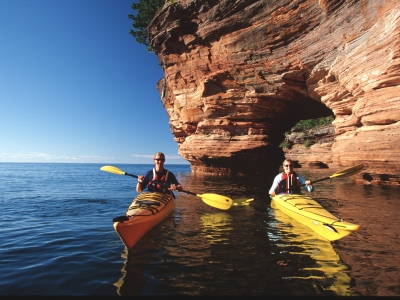 A couple kayaks the Apostle Islands. Wisconsin Department of Tourism

They also encompass the rich history of Europeans and Native Americans, who inhabited the islands thousands of years prior to European settlement. The islands were home to villages and a cluster of fishing camps and farms in the late 19th century, and they also became the site of sandstone quarries and logging operations.

The idea to establish the Apostle Islands as a national park was first proposed around the same time, but groups wouldn't support the idea until natural resources were depleted and local leaders sought tourism as a way to grow the regional economy.

In 1930, President Herbert Hoover signed a bill to study designating the islands as a national park. But the study's consultant, Harlan Kelsey, advised the park service against the designation because the islands had been marred by clearcutting, according to Bob Mackreth, a former park ranger and historian with the Apostle Islands National Lakeshore.

"Just 40 years later, Gaylord Nelson spearheading the movement was able to demonstrate that the area had, in fact, bounced back and regained the qualities of natural beauty, and it shows that nature can heal itself," said Mackreth.

U.S. Sen. Gaylord Nelson, D-Wisconsin, championed an effort to preserve the Apostle Islands and the 21 islands contained within the National Lakeshore long before he founded Earth Day. In 1963, Nelson and President John F. Kennedy traveled to Ashland flying over the islands as part of a national conservation tour.

Speaking before thousands in Ashland, Kennedy recognized that the islands, along with the Bad River area and Lake Superior, are unique and worth preserving.

"In an era of congestion and pollution, manmade noise and dirt, Lake Superior has a beauty that millions can enjoy," said Kennedy. "These islands are part of our American heritage."

Kennedy's speech came seven years before the islands would be protected. Yet, Nelson persevered through years of compromise until President Richard Nixon signed the bill that established the Apostle Islands National Lakeshore. 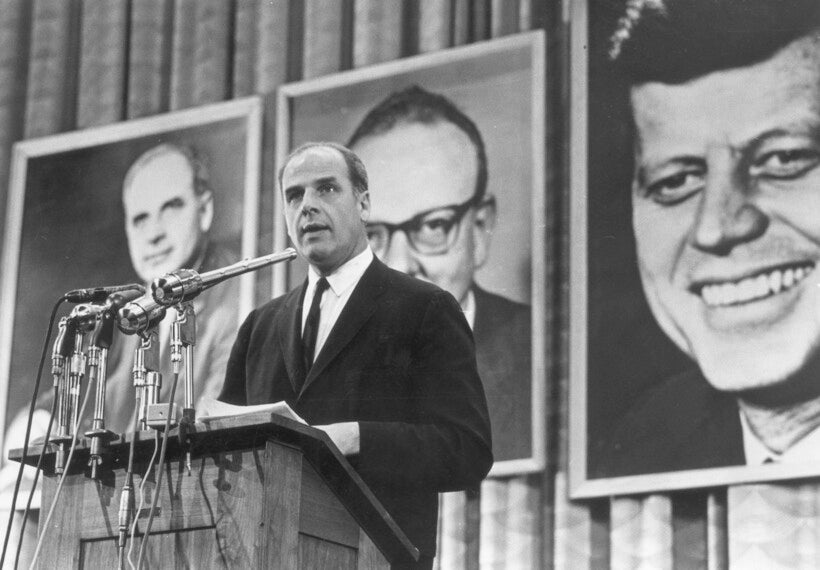 Later in Nelson's life, a majority of the park was also designated a federally protected wilderness in his honor.

The significance of the islands is something the Anishinaabe people understood long before Congress preserved them as a national lakeshore.

Ojibwe History Of The Apostle Islands

The islands were part of the ancestral homelands of Ojibwe communities, said Rob Goslin, tribal elder with the Red Cliff Band of Lake Superior Chippewa.

Mooningwanekaaning, or Madeline Island, although not part of the Lakeshore, is central to the migration story of the Ojibwe people who traveled to the place where food grows on water, referring to manoomin, or wild rice.

"What transpired then from Madeline Island over time is that many of these clans that came along are traditional clans," said Goslin. "They moved from the island to different locations in Wisconsin and Minnesota."

Goslin noted that travel back and forth from those communities to Madeline Island remained constant, emphasizing the spiritual significance of the islands. He believes Indigenous people would go to Oak Island and set up markers through which they viewed the sunrise and sunset, using them to determine the changing of the seasons and when to conduct various ceremonies.

He also recalled traveling to Stockton Island where his family and ancestors would pick blueberries every summer. 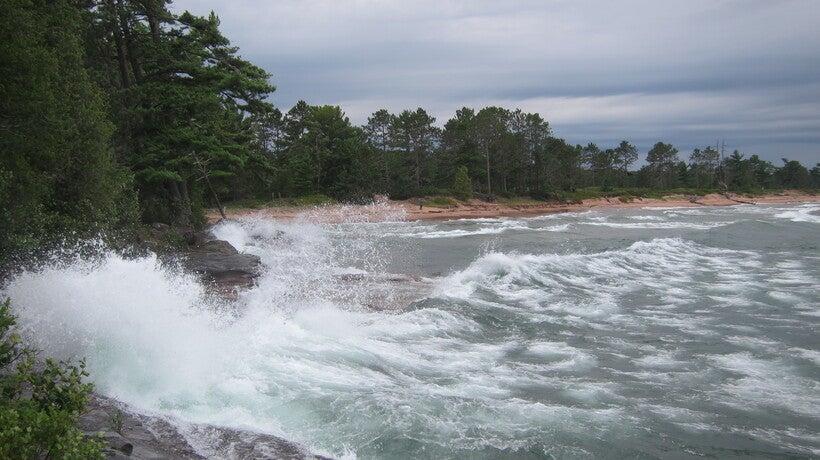 Waves crash against the shore of Stockton Island. Photo courtesy of the Apostle Islands National Lakeshore

"The early Anishinaabe people believe very strongly in nature, and as a result, learned from nature, how to live their own life, and their connection with it and the plants that provided the medicines for them," said Goslin. "And so all of this was gathered not only here on the mainland, but on the Apostle Islands."

Lake Superior Chippewa tribes later signed treaties that ceded territory to the federal government, including the Treaty of 1842 reached at La Pointe on Madeline Island. The United States intended to force the removal of tribes from northern Wisconsin, but Ojibwe bands refused to sell their lands until the U.S. guaranteed they could stay and continue to use them to hunt, fish and gather.

Tribes managed to remain on their ancestral lands, but not before more than 400 people died in the Sandy Lake tragedy as part of the federal government's attempts to reduce resistance to relocation.

The park service has worked to cultivate relationships with the Red Cliff and Bad River Bands of Lake Superior Chippewa through a memorandum of understanding and collaboration on a prescribed burn on Stockton Island in recent years in coordination with cultural traditions.

European Settlement Of The Apostle Islands

From the late 19th to early 20th centuries, there were several attempts to farm the islands on areas that had been logged. Madeline Island was home to anglers and farmers, and its population grew as people built summer homes there. 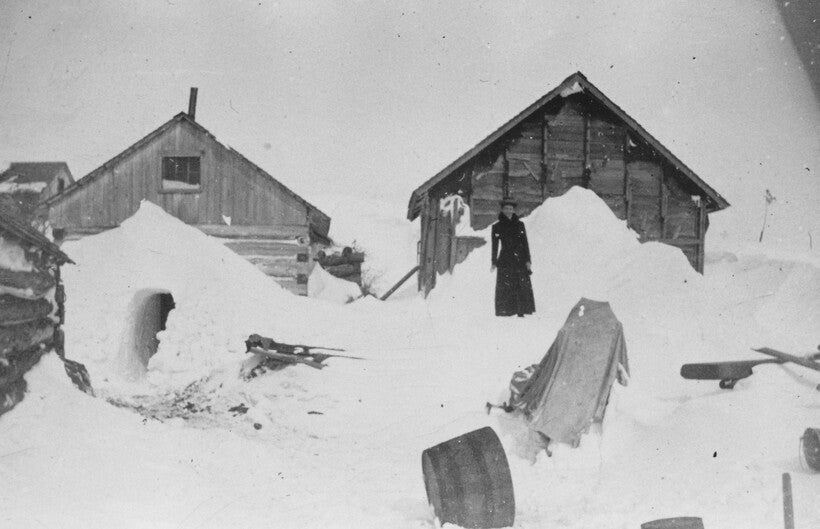 A woman stands on massive snowbank at the turn of the 20th century on Sand Island's Shaw Point. Photo courtesy of the Apostle Islands National Lakeshore

"The settlement grew out of a handful of farmsteads and fishing cabins that Frank Shaw and a couple of other families put there in the late 1800s," said Mackreth. "Then you had the influx of Norwegian immigrants, and by the time of the First World War, there was about 75 people living there year-round."

The village had a post office and a school, but settlers eventually moved to the mainland for work. The last year-round residents left the island in 1944, Mackreth said. Even so, many original families returned during the summer or continued to fish commercially.

When the park was established, there were 41 properties within the Apostle Islands National Lakeshore. Now, there are five families that retain life leases to cabins and old farmsteads at Shaw Point on Sand Island, Dominy said.

In late July, Shaw Point was designated as a historic district on the National Register of Historic Places after years of effort on behalf of park staff and the Apostle Islands Historic Preservation Conservancy. The district recognizes the history of notable families on the island, including Shaw, Bert Hill and Sam Fifield, a former lieutenant governor of Wisconsin. 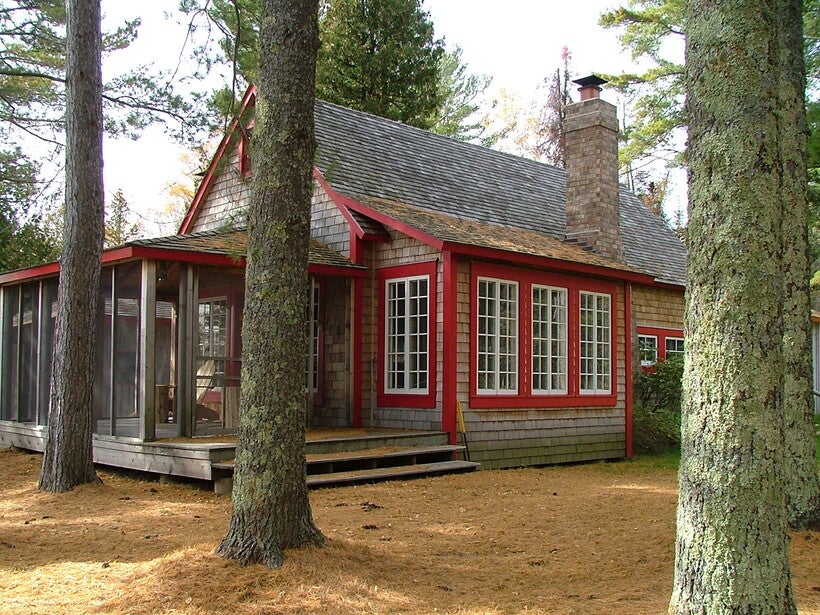 Fifield established Camp Stella, said Charlene Roise, a historical consultant who worked with the conservancy on the designation.

"Originally, it was just some tents, and then he started building facilities," said Roise. "There was a shipwreck, and he got a bunch of hatches and built a cabin that's quite beautiful there with the hatches of the boat that had gone down that washed up on shore."

The historic district is just one of many efforts by the conservancy and park staff to protect and preserve the islands for generations.

Looking Ahead To The Future

The Apostle Islands has grown in notoriety in recent years after the discovery of the ice caves, which drew more than 138,000 people to visit during the winter of 2014. Interest has grown in the islands as park staff face challenges in the protection and preservation of the Lakeshore.

The park service has been contending with deferred maintenance and damage due to storms as high lake levels and winds batter the shoreline. The islands face more than a $9 million backlog of maintenance projects that include the Lakeshore's nine lighthouses and historic buildings.

Dominy said she hopes $6.5 billion in funding through the recently passed Great American Outdoors Act will help invest new life into their lighthouses and make them more accessible.

"Every year, we're trying to tackle the things that need to get fixed," said Dominy. "And every year, especially on Lake Superior, you have more things that get damaged by the lake." 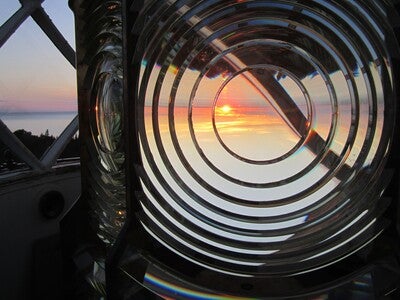 A Fresnel lens within the Devils Island Lighthouse was damaged in storms on Oct. 21, 2019. Photo courtesy of the Apostle Islands National Lakeshore

When asked about the effects of climate change, Dominy said they're fortunate to have people doing research within the park to determine impacts across the islands.

"It's hard to know what the trends are, but certainly there's change going on," she said. "And we'll have to see what that means over the next 10 to 20 to 30 years about how it changes."

Scientists have said that climate change is contributing to more frequent, intense storms like those that have damaged assets along the lakeshore.

The value of preserving the islands lies not only in protecting its beauty and the ecosystems they support, but also the $46 million economic impact they bring to Wisconsin and the more than 200,000 people who visit the park on average each year. 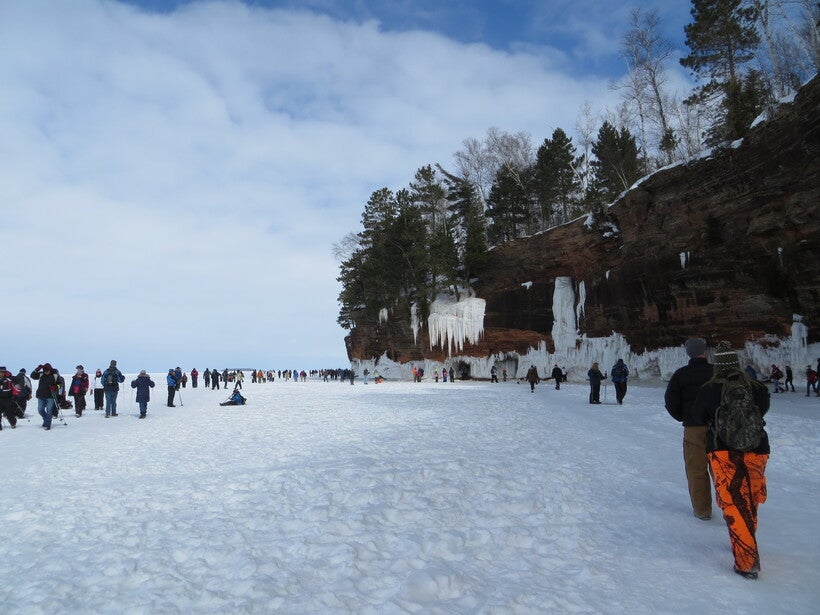 Dominy said the success of the park in the next 50 years depends on everyone working together to address the issues confronting them.

"It's not only recognizing people's heritage and acknowledging their families and their connections to places, but the role that they can play in the future, and that this is a place that its future is dependent on people, and the choices that we make," she said.

Goslin said it's his hope that tribes will have a greater role in decision-making and how the park is managed for the next seven generations.

"We have a very important valuable commodity that here is in this northern Wisconsin region, and that is the Apostle Islands," said Goslin. "And we need to make sure that they are kept for future generations."

More information on events marking the 50th anniversary of the Apostle Islands can be found on the park service website.