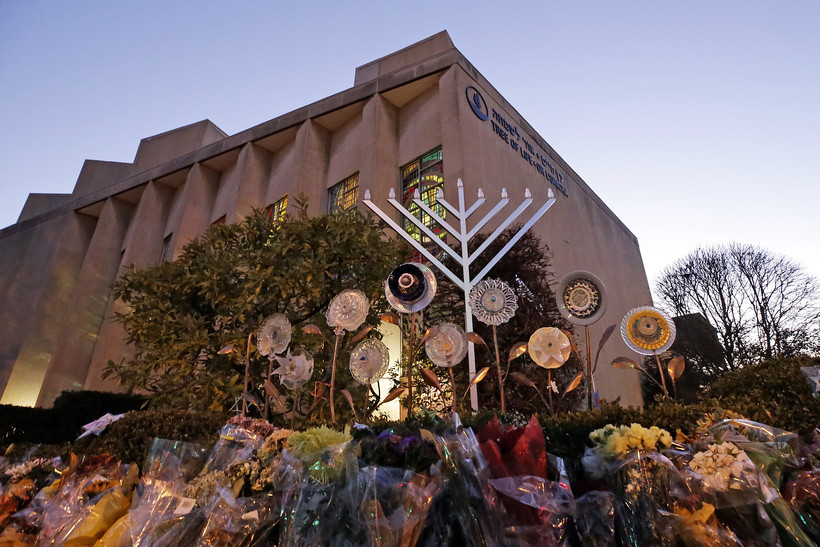 In this Sunday, Dec. 2, 2018 file photo, a menorah is installed outside the Tree of Life Synagogue in preparation for a celebration service at sundown on the first night of Hanukkah, in the Squirrel Hill neighborhood of Pittsburgh. A gunman shot and killed 11 people while they worshipped Saturday, Oct. 27, 2018 at the temple. Gene J. Puskar/AP Photo

Anti-Semitic incidences are growing in Wisconsin, according to the Jewish Community Relations Council.

There were 73 anti-Semitic incidents reported in 2019.

The audit shows an increase in the following types of anti-Semitic incidents:

All have increased significantly, according to the audit. Incidences of direct harassment and assault jumped from 16 in 2018 to 40 in 2019, and more than half of those were harassment and threats.

Elana Kahn, the director of the federation's Jewish Community Relations Council, said she couldn’t pinpoint when exactly the council started the audit but knows the audit has been done for decades.

"Part of its role since it started in 1939 has been to monitor and respond to anti-Semitism," Kahn said of the council.

Kahn started her position roughly 10 years ago, and she said she’s taken it upon herself to look back and pinpoint what the data has been tracking.

Kahn said this type of harassment is different than what they’ve seen in the past. She explained that most incidents involved written expression, but now events are becoming more personal by targeting one person or institution. This suggests a shift in people becoming bolder and more threatening when expressing anti-Semitic views.

Data has shown it's not that more people are anti-Semetic, it's that the people who are are expressing themselves more publicly, Kahn said.

There were 10 incidents involving hate groups last year, according to the audit. That includes the distribution of flyers from the Ku Klux Klan with racist and anti-Semitic language, tweets from a former Wisconsin congressional candidate, and vandalism of synagogues.

But the number of incidents in middle schools grew from two in 2018 to seven in 2019. Five of those events were harassment involving references to the Holocaust, Nazis or Hitler. According to the audit, one report include information about a middle school student who said to a Jewish eighth grader, "Do you prefer gas or bullets?" and "Bring back Hitler so he can kill all the Jews."

"Like grownups say, enough information can be dangerous," Kahn explained. "They (middle schoolers) know about a lot of things but often have the maturity to go with it."

The federation is working with other partners to insure there is high-quality education in schools about the Holocaust and other genocides.

The federation hopes everyone considered as "other" or minorities continue to educate children, embracing their identity, speaking out against hatred, and building alliances.