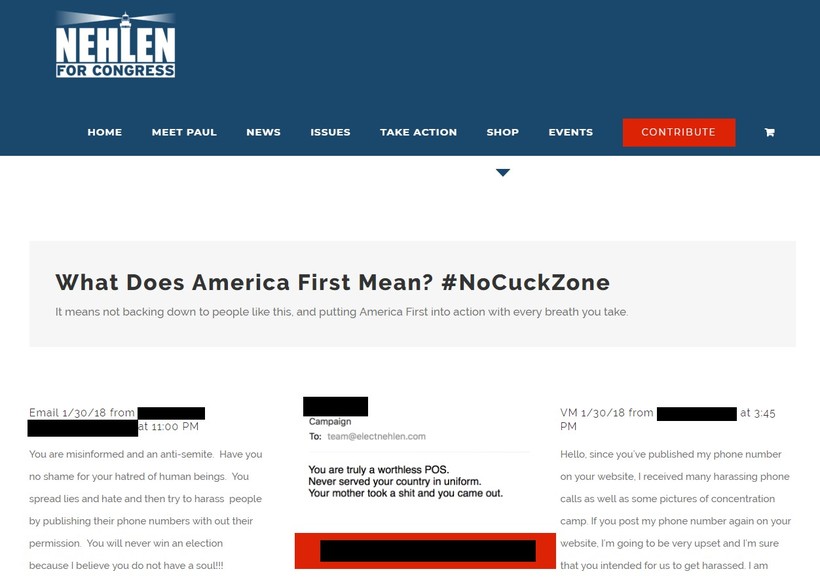 The web page where Paul Nehlen's campaign has posted the names, emails and phone numbers of some of his critics.

On Tuesday, House Speaker Paul Ryan's 2016 primary challenger tweeted a list of 81 Twitter users who have criticized him on the social media platform. In the post, Paul Nehlen asserted 74 of the listed critics were Jewish.

Some of those listed in Nehlen’s tweet, and a host of other critics condemned the post, calling it anti-Semitic.

In tweets sent earlier this month Nehlen called himself pro-white and said Jewish people are over represented in the media.

Ann Jacobs chairs the Jewish Community Relations Council of the Milwaukee Jewish Federation and said she has never seen rhetoric like this in Wisconsin politics.

"The idea that this is someone who is running for public office and who thinks that his anti-Semitic opinions are mainstream, worthwhile, going to get him votes. It's just horrifying," she said, likening his candidacy to David Duke, the former head of the Ku Klux Klan, running for office.

An hour after posting the list of critics, Nehlen tweeted out a link to a page on his campaign website where the names, emails and phone numbers of those who have contacted his campaign to criticize him are posted along with portions of their emails or transcripts of voicemails.

The page’s headline reads "What Does America First Mean? #NoCuckZone: It means not backing down to people like this, and putting America First into action with every breath you take." It includes emails, voicemail transcripts and Facebook messages dating back to November.

The phone number for a woman who asked Wisconsin Public Radio to identify her as M to preserve her privacy is listed on the page several times. She said she first contacted Nehlen’s campaign to refute statements he had made about the media being owned by Jews. She has since called back to ask that her phone number be taken down.

M is of Jewish descent, but not a practicing member of the faith. She said once Nehlen tweeted the link to the page where her phone number was posted she began receiving text messages with photos of dead bodies at concentration camps and calls from people using Jewish and other slurs.

"I contacted someone who wants to be a public official using a public number and because he disagreed with my statement, he posted my private information online," she said. "What upsets me the most is that there are people who want to become part of our government who want to end civic discourse, and civil discourse."

In response to the swift criticism of his list of critics, Nehlen tweeted that he was getting attention for "making lists" and criticized hate groups lists published by the Southern Poverty Law Center and Anti-Defamation League. He also posted text of legislation he said he would propose to "end the radical left's silencing of conservative voices on major social media platforms."

Responding to questions from WPR by email, Nehlen's campiagn said "pointing out factual information is not anti-Semitic," and that people's criticisms of the campaign were posted to the site "to provide the public full transparency of what they can expect if they run for office" and that Nehlen is "no more concerned (about those critics receiving threatening or harassing messages) than they were by making threatening/harassing calls or messaging of this campaign."