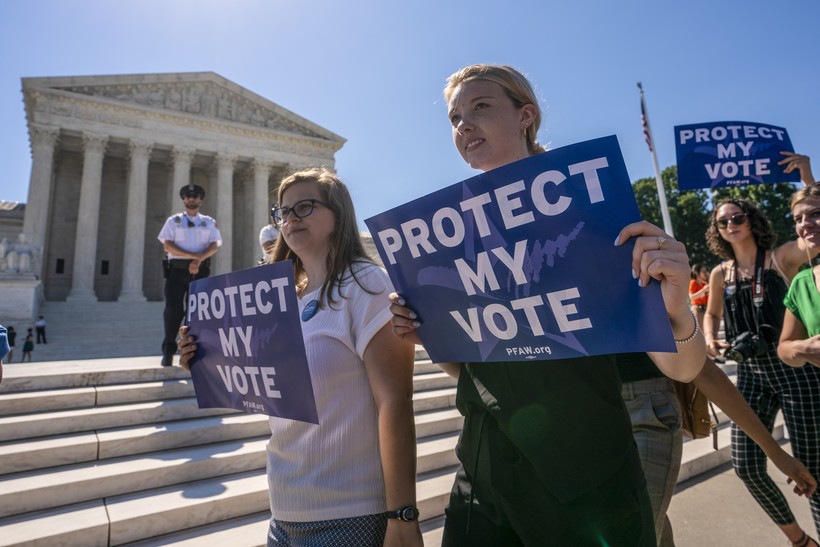 Anti-gerrymandering demonstrators gather at the Supreme Court at the end of a term that involved a key decision on gerrymandering, on Capitol Hill in Washington, Thursday, June 27, 2019. J. Scott Applewhite/AP Photo

Fair Maps For Wisconsin Summit To Be Held Saturday In Marshfield
By Rob Mentzer
Share:

A grassroots anti-gerrymandering group hopes its summit event in central Wisconsin this weekend will give fuel to activists from across the state and across the political spectrum.

"The maps are rigged," said Carlene Bechen. "No matter who we are, we are not being represented fairly."

Bechen is a retired educator who is part of the group Oregon Area Progressives in southern Dane County. She and a group of volunteers pulled together the Fair Maps for Wisconsin Summit, which on Saturday in Marshfield will host panel discussions and training exercises for those from across the state who want to call for changes in the way Wisconsin draws its voting maps.

"People fundamentally want things to be fair," Bechen said. "They don’t want to get what they get by cheating."

The legislative maps Republicans drew after they took power in Wisconsin in 2011 gave them as much as a 13-point electoral advantage, according to expert analysis. They've also been the subject of multiple lawsuits. Most recently, in June, the U.S. Supreme Court ruled that federal courts don't have the power to decide cases related to partisan gerrymandering. That decision effectively ended legal challenges to the 2011 maps.

"The biggest thing people at the grassroots level can do is turn up the pressure," Bechen said. "And the more the pressure gets turned up, people of conscience will pay attention."

Because new maps are drawn every 10 years, the results of the 2020 elections will determine which politicians will be in power for 2021 redistricting, which could reshape maps again.

But activists like Bechen say politicians shouldn’t be drawing the maps in the first place. She points to Michigan’s Independent Citizens Redistricting Commission as a model. Another neighboring state, Iowa, also has nonpartisan redistricting that keeps legislators from control of how the maps are drawn.

The issue is popular across Wisconsin.

A Marquette University Law School poll in January found 72 percent of respondents said they would prefer Wisconsin’s redistricting to be done by a nonpartisan commission. County boards in 47 counties have passed resolutions calling on state lawmakers to create a nonpartisan panel to draw the districts. Voters in eight counties have approved similar referendums.

But Republican politicians who hold power in Wisconsin have opposed such calls. In some cases, they have equated them with attempts to rig maps in favor of Democrats. Former Republican Gov. Scott Walker in March joined a group called the National Republican Redistricting Trust, which opposes the reforms.

Bechen said gerrymandering matters across the political spectrum, because politicians from any party who don't face serious competition have little incentive to be responsive to constituents.

The website for the summit is www.fairmaps4wisummit.com. Cost to register is $50, and those interested can register at the event.