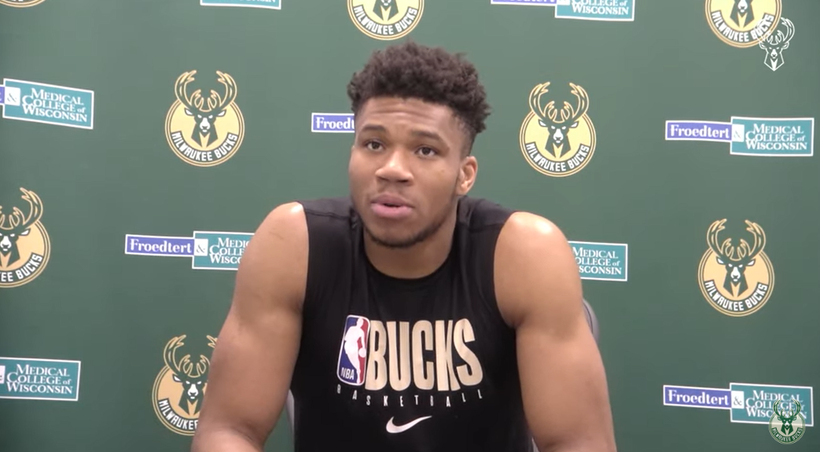 Giannis Antetokounmpo speaks to the media on July 1, 2020. Players will be rusty when the NBA season resumes amid the coronavirus pandemic, he said. Megan Hart/WPR

Antetokounmpo On NBA's Return: 'This Is Going To Be The Toughest Championship You Could Ever Win'

The Milwaukee Bucks Are Set To Resume Their Season July 31 Against The Boston Celtics
By Megan Hart
Share:

Milwaukee Bucks star Giannis Antetokounmpo spoke to the media Wednesday about the NBA’s plan to resume its season amid the coronavirus pandemic.

The league-leading Bucks are among 22 teams set to finish out a shortened regular season later this month. The NBA plans to stick to its traditional playoff format, but all remaining games will be played in Orlando, Florida, despite the state’s recent surge in COVID-19 cases.

Of course, he has health concerns, Antetokounmpo said, but he trusts the NBA and its player’s association will take all the necessary precautions to keep people safe.

With the playoffs around the corner, he’s disappointed the Bucks won’t get the home-court advantage they were on track to earn before the season was suspended in March, Antetokounmpo said.

"We're kind of hard to beat at home. We have unbelievable fans that support us every night," he said. "Not being able to have them out there, I think it's going to hurt a little bit."

He’s hopeful the league will offer some other type of advantage to top seeds, like an additional coach’s challenge, he said.

Antetokounmpo said he worked on getting stronger and mentally sharper during his time off. Still, he expects players to be rusty in the first few games back, he said.

He’s heard commentators say this season's NBA title should come with an asterisk, but Antetokounmpo said he believes the opposite.

"I feel like, at the end of the day, this is going to be the toughest championship you could ever win because the circumstances are really, really tough right now," he said. "Whoever wants it more is going to be able to go out there and take it."

While it’ll be strange to play without fans, traveling to one spot and finishing out the season from a hotel room is nothing new, Antetokounmpo said. The native of Athens, Greece, said it will be similar to playing in European tournaments.

It will be difficult to leave his family, especially his son, Liam, who was born in February, he said, but he feels fortunate that he was able to spend four months with him during the break.

Antetokounmpo and his family made an appearance at one of Milwaukee’s Black Lives Matter protests last month. It’s important the community knows he’s accessible, he said.

"Black Lives Matter" will be painted on the court at all three Orlando arenas where the NBA will finish out the season, sources told ESPN this week. Chris Paul, head of the player’s association, said players may also have the opportunity to display social justice messages on their jerseys.