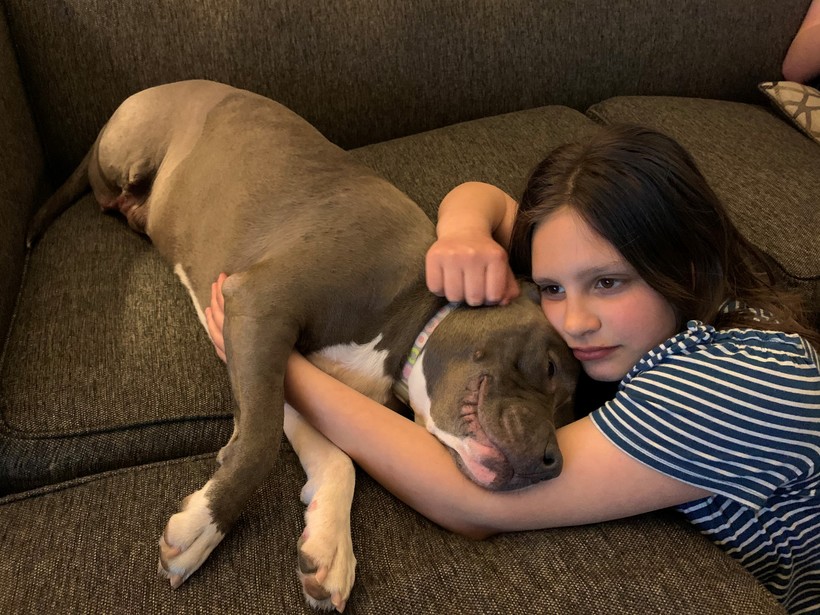 Dezarae Jones-Hartwig's daughter, Esme, cuddles with Guinevere, the dog her family fostered, then adopted. Some Wisconsin animal rescue organizations are reporting a spike in animal fostering and adoption during the COVID-19 stay-at-home requirements. Courtesy of Dezarae Jones-Hartwig

Animal Adoptions Up At Wisconsin Shelters Amid Stay-At-Home Requirements

COVID-19 shutdowns have some Wisconsinites spending more time at home than ever before, leading to a boom in pet fostering and adoptions, some animal rescue organizations report.

"That week, our website crashed. We had 400 foster applications in 48 hours, another record for us. And our foster webpage itself had a 750 percent increase in pageviews," Speed said. "It was just overwhelming for us, and the public stepped up to help in ways we didn’t expect."

Underdog Pet Rescue in Madison is seeing similar spikes. Executive Director Lauren Wojtasiak said since Gov. Tony Evers' administration put in place its 'Safer at Home' order in March, her organization has received 200 or more foster home applications, as opposed to the usual 10 to 25 they get each month.

"I think people want to have purpose in these uncertain times," she said.

Dezarae Jones-Hartwig is the youth programs manager for the Wisconsin Humane Society and a longtime animal fosterer. She said she has taken in dozens of dogs in the last 12 years or so, but didn’t have her first "foster fail" — adopting a dog she set out to keep temporarily — until recently.

Jones-Hartwig saw Guinevere, an approximately two-year-old dog with a badly broken back leg, just as things were starting to shut down in mid-March. She said she figured there was no better time to take in an animal — especially an injured one that needed special care — than when everyone is stuck at home.

"I saw her on Thursday, got the word on Friday that things were going to be kind of coming to a halt, so I talked to my family, and we picked her up on Saturday," Jones-Hartwig said.

Gwinnie’s broken leg ended up having to be amputated, but without the clunky splint, she was free to run around and play. She can even keep up with Jones-Hartwig’s other dog, Merlin.

The whole family knew they had to keep Gwinnie, Jones-Hartwig said. They finalized the adoption two weeks ago, and Gwinnie has surprised them with a feisty edge to her sweet, loving personality. 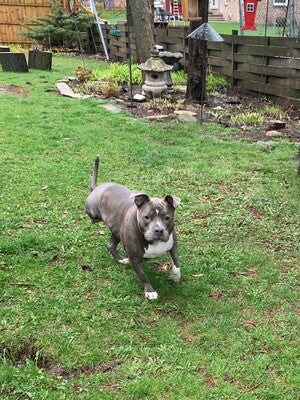 Guinevere, an approximately two-year-old dog of unknown breed, runs around after her back leg was amputated. Dezarae Jones-Hartwig, youth programs director at the Wisconsin Humane Society, took in Gwinnie as a foster pet right as the COVID-19 shutdowns began, and later adopted her. Courtesy of Dezarae Jones-Hartwig

"Fostering her and then adopting her has brought into our family a lot of joy, and a little bit of novelty right now that I think has helped us kind of get through this a little bit more than I think if we hadn’t brought her into our lives," she said.

Wojtasiak, of Underdog Pet Rescue, said she’s worried that when the stay-at-home order ends, some families will return their pets, maybe finding they’ve taken on too much when they’re not always at home.

One way to avoid that is to prepare pets ahead of time, she said.

"Something I really think is an important thing to do with dogs, is to make sure that they’re being left alone a little bit throughout the quarantine, so that when people go back to work, it’s not a crazy transition for the dog," she said.

Kristen Smith has been fostering animals for Underdog since February. Right now, she’s caring for two six-week-old black and white kittens she named Ophelia and Cleopatra, after two songs by the Lumineers.

Smith said people need to remember that fostering is not necessarily a short-term commitment.

"Adoptions are going quick right now, but that could change at any minute, so if you sign up to do this, be prepared that you could have this dog when you go back to work and things pick back up," she said.

With adoptions, if a pet doesn’t turn out to be a good match, that’s nothing to be ashamed of, said Jones-Hartwig.

"The animal shelter, the animal welfare organization is not going to look down on you or look poorly on you if you have to bring an animal back because they’re not the right fit," she said. "It does happen, and we’re all cutting each other a break right now, too."