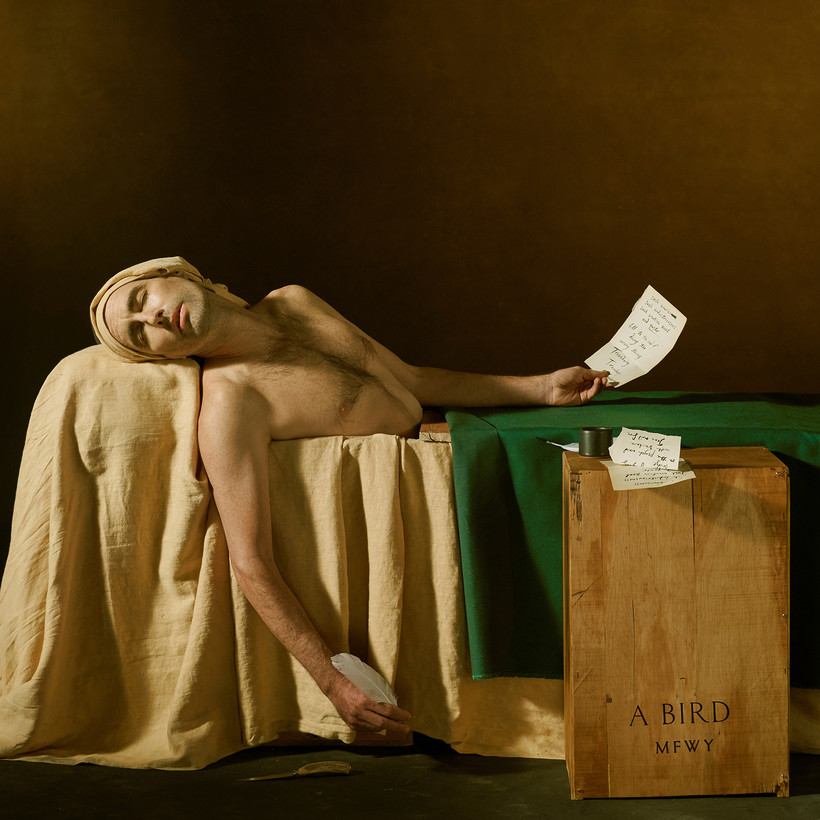 Andrew Bird, 'My Finest Work Yet' (Courtesy of Loma Vista)

The cover art for Andrew Bird’s latest album, "My Finest Work Yet" shows the singer-songwriter transplanted into Jacques-Louis David’s 1793 painting, "The Death of Marat."

The singer-songwriter and classically trained multi-instrumentalist has been crafting delicately-layered indie-folk music since the early 1990s, much to critical acclaim. Bird, also an expert whistler, was featured in the 2011 movie, "The Muppets," and provided musical scoring for comedian Zach Galifianakis' television show, "Baskets."

"First I had the album title, and I was looking for an image that would maybe overplay that to the point of humor. I was thinking, 'The suffering poet on his deathbed breathing his last breath, penning his final words," Bird said of the cover art.

When WPR’s "BETA" host Doug Gordon asked Bird how he would want listeners to interpret the hand-written words on the album's cover he said: "Sometimes when people have cognitive dissonance about what’s right and what’s wrong, they approach the wrong thing with extra zeal. Which is sometimes what I see happening these days."

This is Bird’s 15th studio album and he described it as his, "reaction to being alive at this time ... this one is a little more geopolitical or social in what I’m addressing."

Bird said it took him some time to find the right vocabulary to write songs about current events.

Here are Bird’s own words from the "BETA" interview as he described the motivations behind a few choice tracks from the new album.

Sisyphus was the Greek king who got in trouble for cheating death and he escaped from Hades. Zeus found out and sentenced him to an eternity of pushing a rock up a hill. You hear (this myth) a lot referenced in TV shows. There seems to be something happening in the zeitgeist with that myth these days.

I focus on the moment when Sisyphus gets to the top of that mountain and actually feels like he might have a choice. Either he’s going to jump and end the struggle or let the rock roll down. And I imagine, "Who’s down there when the rock rolls down. Is there a village that’s getting destroyed?"

He’s in a quandary: "What’s my responsibility to the community at large? I know this is not serving me as an individual." The second verse is, "I’d rather fail like a mortal than flail like a god."

The whistling melody started out as the melody for "Bloodless." Early on (in recording the album) the melodies are not very faithful to any one song. Sometimes they get snubbed; which is what happened with "Bloodless." It got kind of crowded in there and (the melody) jumped to "Sisyphus." And if you whistle that melody over "Bloodless" it works just as well. And that’s why an album hangs together sometimes thematically. If it sounds familiar later on in the record, it’s because they used to be in the same song together.

I’m talking about how there’s a lot of money being made in divineness. It was written between the 2016 election and Charlottesville, (Virginia). I felt like I had to say something. It’s all tendencies that have been there for centuries in civilization. It’s just in the last 10 years it’s been amplified.

Twenty years ago or so there was talk of family values in the context of this idea of morality being a set thing. And now I feel like everything’s turned upside down. Maybe we’ll be looking to our rock stars now for our moral compass. But you have to believe in times like these that there is a right and wrong. I didn’t always feel like I had to choose sides before, but now there’s very clearly something wrong going on. And that’s why this album has a certain urgency that I haven’t really felt before.

It takes a broad view of what fossil fuels really are. There’s something kind of poetic, though frightening, about the whole thing. There’s this thing that was once alive that dies, and some of its carbon energy is still contained even though it’s dead. And then it gets compressed underground, and then millions of years later it gets pulled out of the ground and put into an engine ... and the vapor escapes into the atmosphere. But we’re taking that last bit of energy from that once living thing.

I feel like if I lay things out in this way, yeah maybe you’re not going to change any minds ... but can you really argue with what I’m saying?

Bird told "BETA" he was looking for a natural, spacious sonic quality when he was recording the album, which was mostly recorded live in one room, with minimal separation between instruments, and no headphones were used.

"So I’m playing, singing in the room with the drums ... and they’re six feet away from me. And they’re getting in my microphones, and I’m getting in everyone else’s microphones ... and you just have to make that not sound like a mess," Bird said.

"My favorite period of recording was 1958 to 1962 ... jazz records that were made in that time ... the (Rudy) Van Gelder recordings and the Verve records. Nina Simone, Herbie Hancock ... that was my template for this, sonically. That jazz to pop to gospel thing that was going on, pre-Beatles. What I love about those recordings is you can hear the room."

When asked if he thinks this is actually his finest work yet, Bird replied, "Sure. I’ve said that before, which is part of the joke. The last word (in the album's title) is 'yet.' So it’ll be tough to name the next record."

My Finest Work Yet