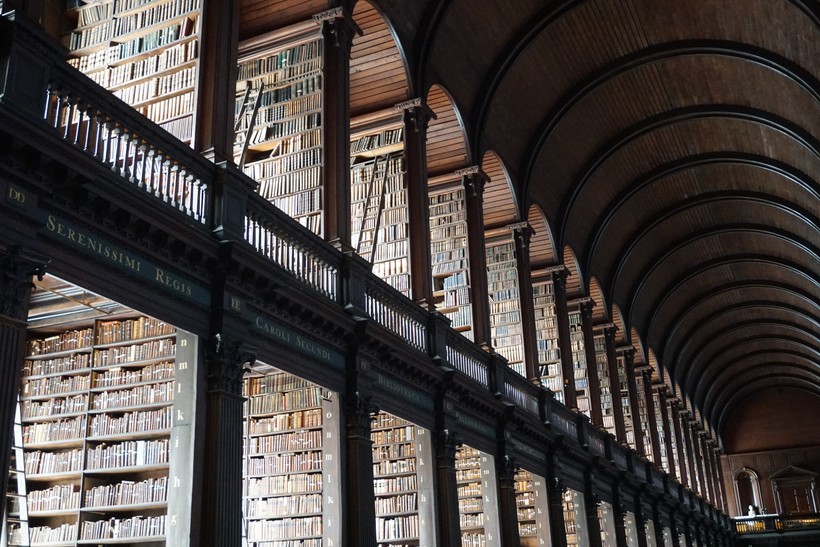 Mac and Gwen used to be the best of friends, so close they considered themselves sisters. But their relationship changes dramatically when they're both admitted to the cutting-edge Emerging Studies program at Dwight Handler University in a northern industrial city and competing for a fellowship that could change their lives. The pressure ramps up to the point that they become enemies.

Gentry drew on her grad school experience at the University of Chicago to write "Bad Habits," which is her third novel. But as she describes herself on Twitter, she's an "accidental crime writer."

When she started writing her first novel, "Good as Gone," Gentry thought of it "as a family drama," she told WPR's "BETA." Even when she was feeling very confident about it, Gentry viewed the book as a literary novel, a kind of psychological fake-out novel in the tradition of author Henry James.

Gentry explained that when she read Gillian Flynn's "Gone Girl," it really helped her see the draft of her work in progress in a whole new way.

"It just snapped something into place for me about the way that different voices in a novel can provide a twist without really providing a real twist," she explained. "I really love the phenomenon of the different points of view that you can flip back and forth between. And each one, depending on who you sympathize with or identify with, provides an entirely different picture of the same events. It's a bit 'Rashomon' as well."

Mac and Gwen, the central characters of "Bad Habits," came to Gentry in a dream. She said that isn't usually the way the idea for a novel comes to her. But in this case, "the vision of these two women reuniting in a hotel lobby after years apart, knowing that they had been once best friends and that now one of them wanted to kill the other is almost all I knew" from the dream.

Mac and Gwen have known each other since high school. When Gwen moved to town, she and Mac quickly struck up a strong friendship. Mac struggles financially while Gwen never has to worry about money because her family is rich. The Joyner fellowship allows one very ambitious student from Dwight Handler University to spend up to two years doing dissertation research at any partner European university and live on a very generous stipend. As Professor Bethany Ladd tells Mac: "It's as close to a guarantee of a tenure-track Research 1 job as you are likely to find in this fallen world."

After a decade apart, Mac and Gwen encounter one another at a hotel bar in Los Angeles. Mac is now a professor who has just given a keynote address at an academic conference at the hotel.

Gentry knew she would tell the story from the point of view of Mac.

"I wanted her to feel a bit like Tom Ripley from the Patricia Highsmith novels." Tom Ripley is a fictional con artist and serial killer that appears in five of Highsmith's novels. Matt Damon played him in the 1999 thriller, "The Talented Mr. Ripley," based on Highsmith's 1955 novel of the same name.

Since attending the University of Chicago, Gentry has been waiting for the opportunity to use graduate school as a setting for one of her novels, and she thought "Bad Habits" was the perfect fit.

"What better place for a friendship to turn horrible and ugly than in a graduate program, a highly competitive one," she said.

Gentry enjoyed creating Dwight Handler University and the Emerging Studies program, although a lot of that world building didn't make it into the book.

"It was really important to me that readers be able to understand and inhabit this world as an outsider," Gentry said. "But still, it couldn't be too alienating. So I tried to really walk a line with the academic satire and not make it too inside baseball."

Gentry came from a very laid-back undergrad experience and kind of accidentally fell into the University of Chicago's grad school program where she earned a doctorate in English.

"And that became my life," she said. "And learning with that kind of environment was like, you know, people behave in bad ways when they are under constant pressure and stress, when there is only a very narrow way for them to succeed and limited resources for success. As in academia, there's no real job market for the humanities. And the people that you rely on to succeed in that environment are over you in this somewhat rigid hierarchy. They're your advisors and professors, and yet there are no boundaries. You're often encouraged to see them as peers and hang out with them as if they're peers, and yet they have total power over you, over your career."

Gentry said she enjoyed poking fun at academia but not just for the sake of saying they're silly, because she doesn't think that's very interesting and academics do have value.

It was "more to just pull up the feelings under those jokes and show some ugly truths that are happening in that environment where structural inequality is often reproduced," she said.