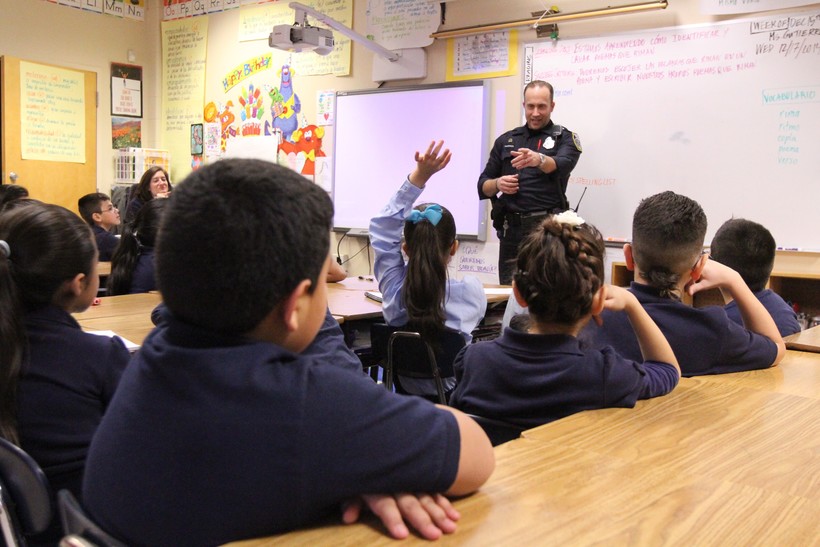 Amid Nationwide Calls To Remove Police From Schools, Platteville Reexamines Plan To Add An Officer This Fall

While Some In Platteville Push To Reconsider, Waterford Union High School Is Moving Ahead
By Madeline Fox
Share:

Recent votes in Madison, Milwaukee and school districts around the country to remove police officers from schools have prompted one district to reexamine its decision to add a community resource officer to its high school this fall.

Platteville approved the addition of a community resource officer (CRO) last winter. Superintendent Jim Boebel said the local police chief, city council, school board members and leadership team were all in favor of adding the position — which would be funded through its community Fund 80 money — for three reasons: law enforcement, relationship building with students and families in the district, and building relationships in the broader community.

"We wanted to build and improve our collaboration with our community and with our city, and one of the ways we could do that would be through having a community resource officer," he said. "Many things have changed in our community, in our state, in our nation since then, but at that time, if you go back to November 2019, it seemed to be a really positive move that we thought would help our community and our schools."

But after school districts across the state voted to cancel their contracts with school resource officers, drawing attention to research on the harmful effects of having police officers in schools, Boebel said he and the school district are picking the conversation up again.

"It’s now July 2020, and, well, the dynamics have changed, so we need to reevaluate it," he said. "We always want to do what is best for our students, to give them the best chance to succeed. Because of what’s happened in our community, we believe it is our duty to bring that discussion up again."

The CRO position is on the Platteville school board’s agenda to discuss next Wednesday, along with the district’s fall reopening plan. Boebel said they’re hoping to hear from community members about their concerns, and what they’d like to see going forward.

They may get some ideas from a survey conducted by Graham Streich, an alum of the Platteville School District who has taught at schools on the Blackfeet Nation reservation in Montana and in Manhattan. He temporarily moved back to his family’s land in Platteville after the coronavirus pandemic put his research assistant job at New York University on hold, and started following local politics. When he heard about the community resource officer proposal, he drafted a six-question survey in Google Forms and emailed it to the more than 200 employees of the Platteville School District. He said he’s gotten 32 responses back.

"I really want to see what’s best for the community, and reading these responses from the employees has actually been quite insightful," he said. "My goal is just to understand what people are thinking, and what the (CRO) position looks like."

He said from the responses he’s received so far, a lot of school district employees are in favor of having a community resource officer, but many are concerned about implementation — things like whether the officer will be armed, and what their training will look like. Others in favor of adding a CRO have said it's necessary to deal with problems they've had at the high school. But other school district employees said they don't support putting police officers in schools, and would rather see the funding go to a behavioral specialist, diversity training or be invested in professional development to help improve social-emotional learning.

Boebel, the superintendent, has been in touch with Streich, and asked him to share his survey results, which Streich is compiling this weekend after he closes the survey on Friday.

As for Streich himself, he has some reservations about putting an officer in schools.

"My biggest concern, just as a citizen, is that they’re trying to use law enforcement to handle behavioral issues, and that seems like a slippery slope," he said. "But I’m not trying to just assume something’s the right option for this community that I’ve been distant from for a while."

At Waterford Union High School in Racine County, the nationwide reckoning over the role of police in communities hasn’t altered plans to install a school resource officer (SRO) this fall.

The leader of the union for teachers and educational assistants in the Racine Unified School District — which is separate from Waterford Union High School but shares a county — has called for police officers to be removed from RUSD schools. That district has one police officer stationed full time in each high school, and one who rotates through the middle schools. The RUSD school board hasn't scheduled a vote, or indicated that they intend to remove the officers.

Francois said Waterford Union High School previously had an SRO that was funded through a partnership between the school district and village, but that position was eliminated years ago when the village could no longer put up its share of the cost.

In December of last year, the Waterford village government authorized emergency funds in response to what they believed at the time was a student pulling a gun on an officer at Waukesha South High School, 20 miles away (it was later revealed to be a pellet gun).

"It was close enough to home that it caused our community and our village, and really our village board stepped up and said we need to protect our kids locally in the short term, and then see if we can come up with a long-term solution," Francois said. "Everybody — the township, the village and the school board, which are all joint players in the possibility to have an SRO — were all in unanimous support of a school resource officer in schools — the question, or the debate, was just how to pay for it."

A referendum to fund the position narrowly failed in April. Francois said they’ve been exploring other funding options.

The state Department of Public Instruction doesn’t keep track of how many school resource officers are employed in Wisconsin, or of how many districts have SROs. National estimates suggest that two-thirds of students attend a school with a police officer, and that students attending schools with a high Black or Latinx population are more likely to have an officer stationed at their schools.

Milwaukee Public Schools had six SROs who moved around the district before it voted to terminate its contract with the police department, while Madison had one officer each at four of its six high schools before the board voted to discontinue the SRO program.