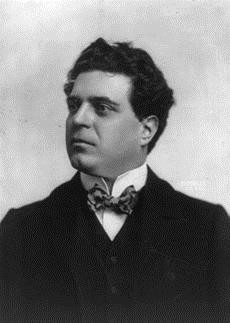 On September 24, 1902, Pietro Mascagni sailed for New York with an opera company that he had assembled hastily for an American tour. He would discover some old truths in the New World.

When Mascagni and his wife arrived in New York they received a warm welcome from thousands of cheering Italians who accompanied them up Broadway. The next day, reality set in.

Arriving at the Metropolitan Opera House, Mascagni found two orchestras waiting for him–the one he had brought from Italy and an American orchestra that had been rounded up by the Musical Union, which demanded that Mascagni’s orchestra be deported.  Pressing on with his own musicians, Mascagni had only two days to rehearse for the debut of his celebrated opera Cavalleria Rusticana and a novelty called Zanetto.

The audience reaction was enthusiastic and the reviews generally sympathetic, but New Yorkers who struggled through a rainstorm to hear Mascagni’s opera Iris only to find that the unprepared composer had rescheduled it, left wet and angry as Mascagni stayed behind locked doors continuing to rehearse the orchestra.

A road tour played to rather small audiences because most wanted to hear the famous Cavalleria Rusticana rather than Mascagni’s newer operas. In Boston the reviews were favorable, but minutes before the long-awaited debut of the opera Ratcliff, the long unpaid musicians walked out. Claiming that Mascagni owed him a small fortune, the American organizer of the tour had the composer confined to his hotel suite until his attorney came up with $4,000 bail.

For the next five months Mascagni pieced and patched his way to San Francisco, where he managed to end his American tour with modest success, and when the Massachusetts Supreme Court threw out the suit against him, Pietro Mascagni took the fastest train and the fastest boats back to Italy.