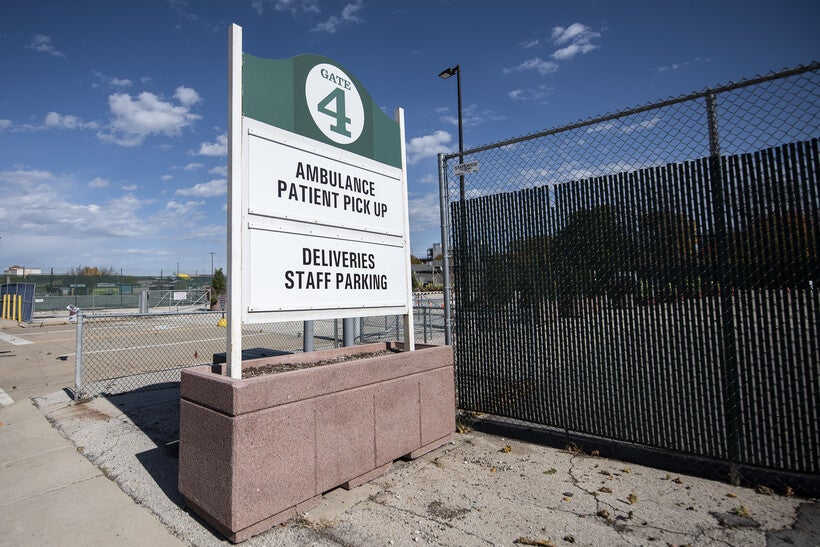 A sign outside of State Fair Park in West Allis on Tuesday, Oct. 13, 2020, where an overflow COVID-19 field hospital has been constructed. Angela Major/WPR

One week after opening an overflow alternate care facility for recovering COVID-19 patients, the Wisconsin Department of Health Services reported one patient has been admitted to the West Allis facility. New reports of COVID-19 cases continue to climb in the state, and deaths from the disease reached their highest level yet based on the latest data published by DHS.

DHS reported 4,205 new cases of the disease Wednesday, the highest daily total recorded during the pandemic. However, the agency said weekend maintenance on the computer system used to track cases has caused a backlog of data, and is affecting single-day totals.

The average number of positive cases for the past seven days is 3,444. One week ago, the average was 2,840 daily cases. Daily new cases have been rising steadily since Sept. 3 when the average was 674.

There were 48 new deaths from COVID-19 reported Wednesday. That is a record high. On Wednesday, 5,681 tested negative.

Twenty-two percent of people who got tested for COVID-19 over the past week were positive for the disease, according to DHS. That rate has been on the rise. Two weeks ago the average positivity rate was 17 percent.

On Sept. 30, DHS also introduced an alternative positivity rate, one that measures the percentage of tests that are positive, instead of the percentage of people who get a positive result. The new metric takes into account people who have been tested multiple times. The seven-day average for that number is at 12 percent.

According to DHS, there were 1,192 COVID-19 patients hospitalized as of Tuesday. In the northeastern part of the state, Sheboygan County Public Health said surging cases of COVID-19 had filled 90 percent of the region's hospital beds. Statewide, a total of 9,704 people have been hospitalized because of the disease, or 5.3 percent of all positive cases.

The latest figures bring the overall total of positive cases in Wisconsin to 182,687, according to DHS. A total of 1,681 people in Wisconsin have died from COVID-19.

COVID-19 activity varies heavily from county to county. The latest county and regional activity data from DHS, released Wednesday afternoon, showed 68 counties had a "very high level" of COVID-19 activity, an increase of 11 from last week's report. The rest — Burnett, Douglas, Pierce and Polk counties — had a "high" level of activity.

Wisconsin's daily testing capacity — based on the availability of test supplies and adequate staffing — has grown from 120 available lab tests in early March to 42,379 as of Wednesday. The number of actual people with new test results reported Wednesday was 9,886.