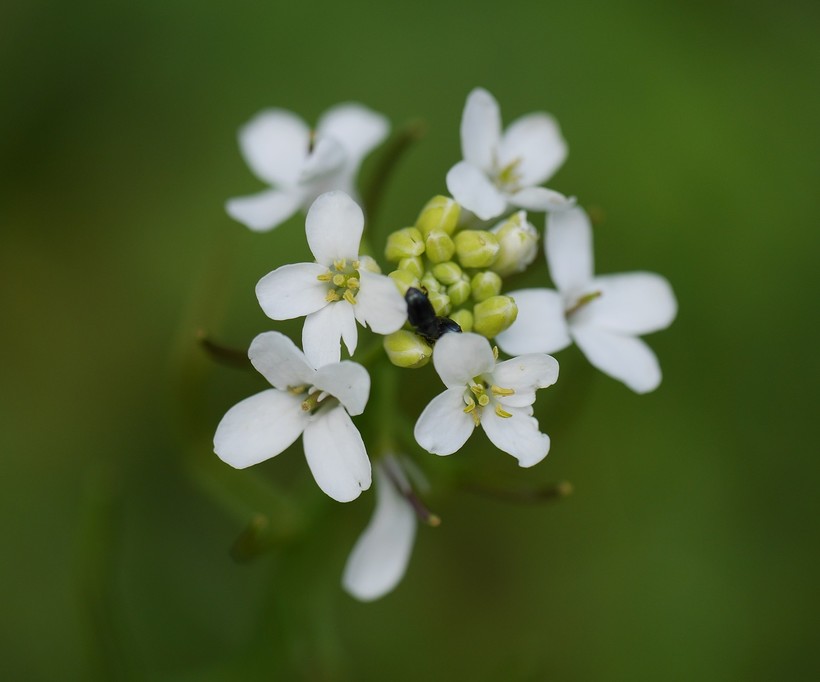 Working in the model plant Arabidopsis, UW-Madison botanists were able to identify a certain gene mutation that could take the brakes off of production of aromatic amino acids, which combine to make compounds that are used in food, fuels, and medicine. Dawid Skalec/UW-Madison

Plants already pull significant weight in removing carbon dioxide from the air, but a new study out of the University of Wisconsin-Madison shows there's potential for plants to capture more.

The study, which was published Wednesday in the journal Science Advances, also shows the potential to increase the amount of aromatic compounds — or the building blocks for certain biofuels and medicines — produced by plants.

Scientists were able to identify a certain gene mutation in the mustard plant Arabidopsis that could take the brakes off of production of aromatic amino acids, which combine to make compounds that are used in food, fuels and medicine.

"We were able to tweak the mechanisms to overproduce these compounds in plants," said Hiroshi Maeda, a UW-Madison botany professor who led the research.

Normally, these compounds are produced as a byproduct of petroleum refinement, Maeda said. The research shows the potential that they could be produced by plants instead, he said.

"We would like to find a way to produce these compounds in more sustainable ways," he said.

Additionally, researchers found that modifying this gene caused the plants to absorb 30 percent more carbon dioxide than normal without any ill effect on the plants. If they could reproduce these results at a large scale, it could have an effect on climate change, Maeda said.

"We may be able to really increase the amount of CO2 captured by a crop overall, so that it would decrease the CO2 concentration in the air," Maeda said.

The next step is to try to reproduce the results in actual crops, said Marcos Oliveria, a UW-Madison researcher who worked on the study.

"(Arabidopsis) produces a lot of seeds, and it's very good for genetic studies," he said. "But we want to translate this research into (plants that are) useful for human food and the human diet, and even the production of biofuels."

As for potential concerns about genetically modified food crops, Maeda said scientists can "work with society" to decide if this technology should be applied. In the meantime, though, he said it could have a positive impact on carbon emissions and climate change.

"We can initially separate the food crops from the bioenergy crops so that we can apply this technology for some more environmental aspects," he said. "Then separately, we can discuss if we should apply this to our food crops."