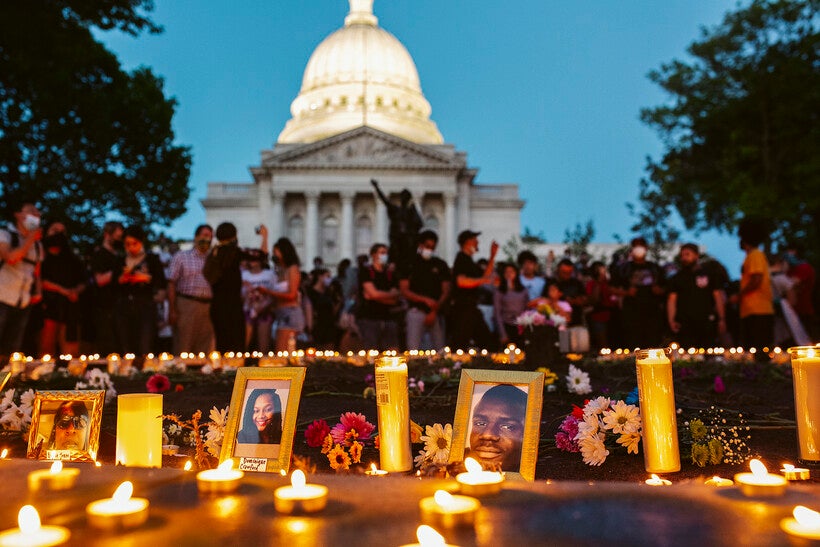 Along With Call For Justice, Some Protesters Make Call For People To Vote

Thousands of people across Wisconsin have turned out for protests in recent days calling for changes to policing policies and tactics they say result in disproportionate use of force against people of color. Some activists say lasting change will only happen if protesters also turn out to vote.

Vaun Mayes is a Milwaukee activist and has led some of the protests in Milwaukee. He said he wants protesters to vote in November to help make it possible to change laws that protect police officers and to draft legislation that will better protect communities of color.

One piece of legislation Mayes has in mind would be a "red flag" system for law enforcement to ensure officers who have multiple complaints don't get lost in the system.

"Typically, what happens is a lot of these officers get to hide their complaints and their infractions in their personnel files. It empowers them to keep doing stuff that's not right," Mayes said.

Rick Banks is the political director for BLOC — Black Leaders Organizing Communities. The group formed following the 2016 election to get black voters re-engaged in politics and help Democratic candidates more meaningfully engage with the community. Banks said voter turn out will depend on how strategic organizers are on capturing the momentum.

"I think part of the frustration is we elect the leaders, and we don't get the change we are seeking from the Democrats or Republicans," Banks said. "I think it's on us as organizers to engage and hear where (protesters) are coming from and then make sure they understand the connections between voting and continually hold elected officials accountable."

Banks said Milwaukee has been controlled by Democrats and continues to be one of the worst cities in the country for black people to live in.

"Even having black leadership hasn’t necessarily translated into adequate policy change, so there is significant change that needs to happen as far as the make-up of the Common Council and the mayor's office, as well as their willingness to listen," Banks said.

Milwaukee Mayor Tom Barrett said in an interview with WPR last week he wants a full review done whenever he sees a video or incident between Milwaukee police and a community member that raises questions. Barrett also said he doesn't believe it is ever appropriate for police to use rubber bullets to disperse crowds and that tear gas should be limited.

On Friday, Barrett created a Commission on Police Accountability and Reform to examine police practices. The group, which includes community, civic and grassroots leaders, will have 90 days to examine the department before reporting their findings to the city.

Paul Nolette, an associate professor of political science at Marquette University, said the Black Lives Matter protests are driving a lot of enthusiasm and passion that could push people to get involved in other ways, like voting and the electoral process.

"A lot of times when people don’t vote, one of the reasons is they just aren't enthusiastic about doing so," Nolette said.

Voter turnout for African Americans was down about 7 percent nationwide in 2016 compared with 2012, according to U.S. Census estimates. In Wisconsin, it was down 20 percent, according to the Center for American Progress.

The killing of George Floyd while in police custody sparked protests first in Minneapolis, then later nationwide. But over the last week, protests have become about much more than just one incident: They're also addressing systemic racism, police brutality, First Amendment rights for journalists and President Donald Trump, Nolette said.

The U.S. presidential election is four months away, in a time of a worldwide pandemic and national protests, that can feel like a lifetime, but Nolette doesn’t think the movement will lose momentum between now and November.

"While there is a risk of the passion declining, the underlying issues raised — which is a combination of race and anger about Trump’s direction for the country — those things are not likely to go anywhere in the next four months," Nolette said. "The issue for a lot of the activists and those encouraging people to vote is, they need to emphasize to people (that) the electoral process is important as well."

Eileen Newcomer, voter education manager with the League of Wisconsin Women Voters, agreed with Nolette and thinks more people, particularly women and people of color, will vote in November as a result of the protests.

"People recognize voting is an important way to make change in the community and is a great way to make their voice heard," Newcomer said. "We hope people feel empowered to get out and vote."

"Before George Floyd, people of color were the only people that believed we needed change (with police). But with George Floyd, everyone seems to think this is wrong," Mayes said. "So we are just trying to tap into that energy, so we should all come together in doing something about it.

In Wisconsin, making that change happen with a Republican-controlled Legislature might be challenge. However, Mayes said he hasn't ruled out the possibility of trying to engage the GOP to be a part of the change he wants to see.