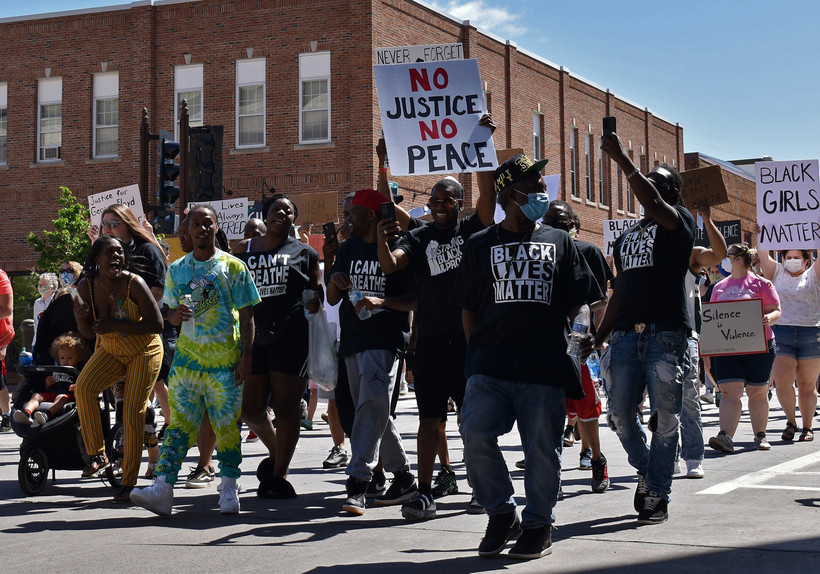 Protesters march in Wausau on Saturday, June 6, 2020 to raise awareness for Black Lives Matter and the killing of Minneapolis man George Floyd while in police custody. Rob Mentzer/WPR

More than a dozen public protests were scheduled around Wisconsin on Saturday as public outcry continues in the wake of George Floyd's death while in Minneapolis police custody on May 25.

Saturday marks the ninth day in which demonstrations have filled city streets and public spaces as organizers have sought to raise awareness about a range of social justice issues, including institutional racism, police brutality and the flaws of the criminal justice system, among others. Demonstrations occurred in Madison, Milwaukee, Wausau, Ashland, Green Bay and other cities around the state.

In Madison, a "Walk a Mile In Our Shoes" demonstration was set to begin at 8:15 a.m. Organizers said the goal of the event is to promote fitness and walking together and will continue every Saturday in June. 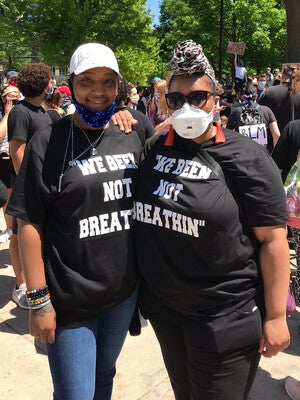 Felicia Turner-Walton, left, and Micaela Berry — doulas with Harambee Village, a community-based agency that provides pregnancy, birth and lactation support to mothers in south-central Wisconsin — attended a protest on disparities in health care for women of color on June 6, 2020 in Madison, Wis. Shamane Mills/WPR

At noon, demonstrators gathered at the Capitol Square for a protest and march centered on disparities in health care and infant and maternal mortality rates among black people.

When asked what Saturday's demonstration meant to her, Turner-Walton said it was about justice.

"Not just in our policing. Justice in our maternal health and our psychological health, our mental health, our physical health, our well-being," Turner-Walton said. "It takes us nine months to carry, nine-plus hours to deliver. For one of our sons to scream, beg for his life for nine minutes ... who gave you the right to take that away? As a Harambe Village doula, we give life, we teach people how to breathe."

A little before 1:30 p.m. protesters arrived at UnityPoint Health-Meriter, where organizers said "personal stories, experience and creative writing" would be shared.

Corinda Rainey-Moore, board member for the Foundation for Black Women’s Wellness and UnityPoint Health-Meriter community engagement manager, addressed the crowd outside Meriter Hospital.

"On behalf of Meriter, I want you to know that Meriter actually has been making some changes. We stand by our mission and our vision of making a safe environment for everyone ... that includes people who come to us for care and our staff," Rainey-Moore said as she addressed protesters demanding better health care for people of color.

"We know what happened to George Floyd and folks before him is not OK. We know that was horrendous. We just want folks to know we are working on our internal biases and providing training to our staff," she said, adding "if there's anything you need or want us to address or talk about we're willing to listen because we are a community hospital." 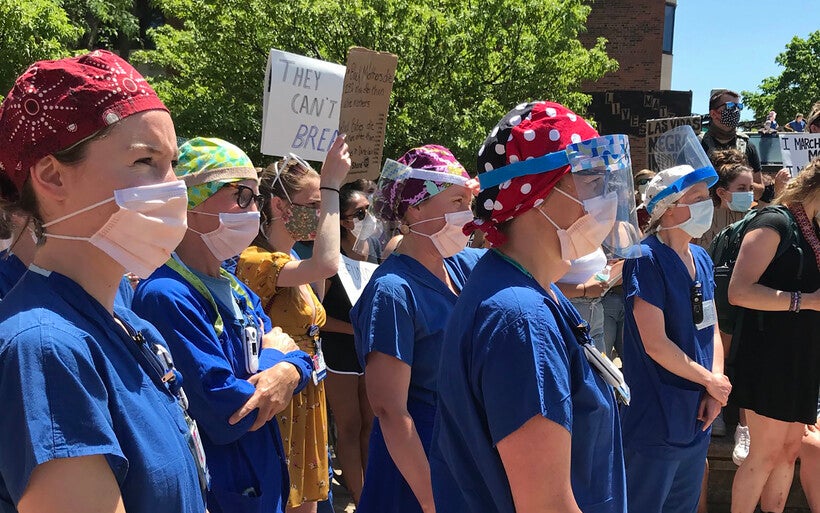 In the Milwaukee area, at least nine events were scheduled, including a rally at Fowler Lake Park in Oconomowoc; a march starting at Big Bay/Buckley Park in Whitefish Bay at 1 p.m.; a protest scheduled for 1 p.m. at Atwater Park in Shorewood; a rally at Water Tower, located at 2472 E. North Avenue, in Milwaukee at 1 p.m. Rallies and marches were also planned at 3 p.m., including one organized by Black Educators Caucus MKE at 99 Street and Good Hope Road. Another rally was planned at Rufus King High School. At North 76th and Burleigh Streets, a "March for Thee Three" was planned at 4 p.m. In Brown Deer, a walk was planned for 6 p.m. at Brown Deer High School.

At 11 a.m., demonstrators organized by El Pueblo MKE met at the Mitchell Park Domes in Milwaukee to march across the 16th Street Bridge. According to the Facebook event, "In 1967, during Milwaukee's Fair Housing Marches, the 16th street bridge was the location of racial violence as peaceful protestors marched across it and were met with violent white resistance."

Organizers said they were marching across the bridge in solidarity with the Black Lives Matters movement, and when they arrived, they took a knee. 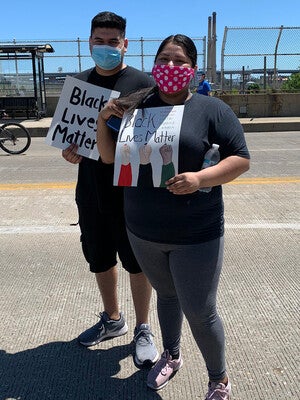 Milwaukee native Maribel, 22, marched in support of black lives on June 6, 2020 in Milwaukee, Wis. She said, "I know some believe that all lives matter but in the end all lives don’t matter until black lives matter." Megan Hart/WPR

Maribel, 22, joined in on the march carrying a sign that read: "Black Lives Matter. Men, Woman, Children, LGBTQ+, Disabled, Latinx." She said she was there because she cares about the lives of African Americans.

"I know some believe that all lives matter, but in the end, all lives don't matter until black lives matter and I'd like to include that when I speak about black lives I speak of men, women, children, LGBTQ+, the disabled and black Latinx because they exist, too," Maribel said.

She wore a mask as a precaution against COVID-19, and said while she's worried about the virus.

Families and educators came together for a chalk event in Milwaukee that began at 3 p.m. at the intersection of North 99th Street and Good Hope Road. Attendees planned to make their way to Milwaukee Police Chief Alfonso Morales' house for a peaceful gathering.

Angela Harris, a first-grade teacher ar Dr. Martin Luther King Jr. Elementary School and organizer of the event, said she hoped it would be a way for children to get involved. 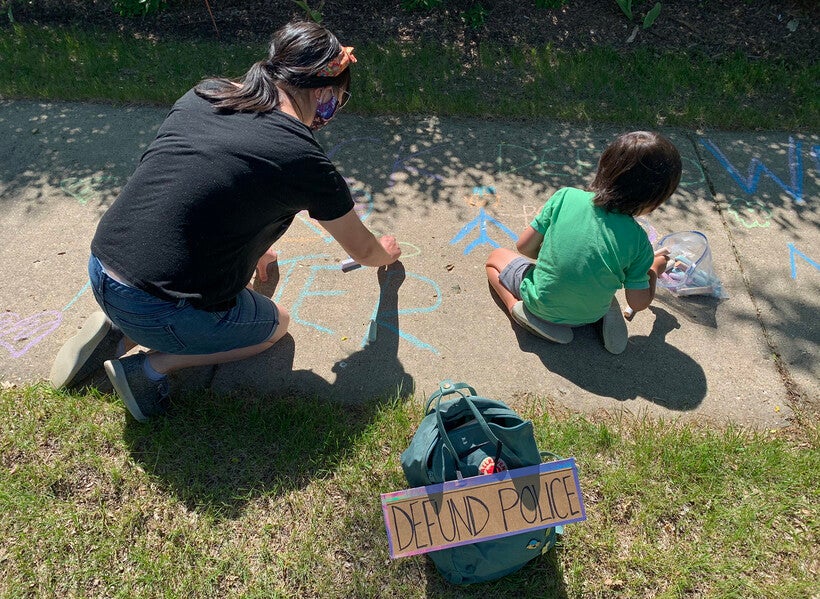 "I think when you think about a typical protest like a march, sometimes they're extremely long, children get a little bit antsy, and it also doesn't allow for parents, caregivers, family members to really have conversations about why you are actually marching," she said.

"I thought that this would be a way to allow children to express their voice and learn what it means to be an activist and an advocate but then it also opens up an opportunity for parents to begin having conversations about what all of this actually means," Harris continued.

Giannis Antetokounmpo and several other Milwaukee Bucks players joined one of the protests Saturday as it traveled down 27th Street. Antetokounmpo spoke to the crowd and handed out water to protesters.

"I want my kid to grow up here in Milwaukee, and not to be scared to walk in the streets," he told them.

Antetokounmpo was joined by Sterling Brown, Donte DiVincenzo and Brook Lopez among others. All wore masks and matching T-shirts that read "I can't breathe."

In 2018, the Milwaukee Police Department conducted an investigation after a Taser was used on Brown and he was arrested over a parking violation. The incident inspired the Bucks organization to host a social justice forum earlier this year.

A crowd gathers in Wausau’s 400 Block ahead of the protest march on Saturday morning, June 6, 2020. Rob Mentzer/WPR

In Wausau, organizers worked with local police to organize a march which closed downtown streets for the morning and into early afternoon.

Organizer Kayley McColley told the crowd that the march's turnout of roughly 1,500 was thrilling.

"I think I speak for all the organizers when I say I am shocked in the best way by how many people are here today," she said. 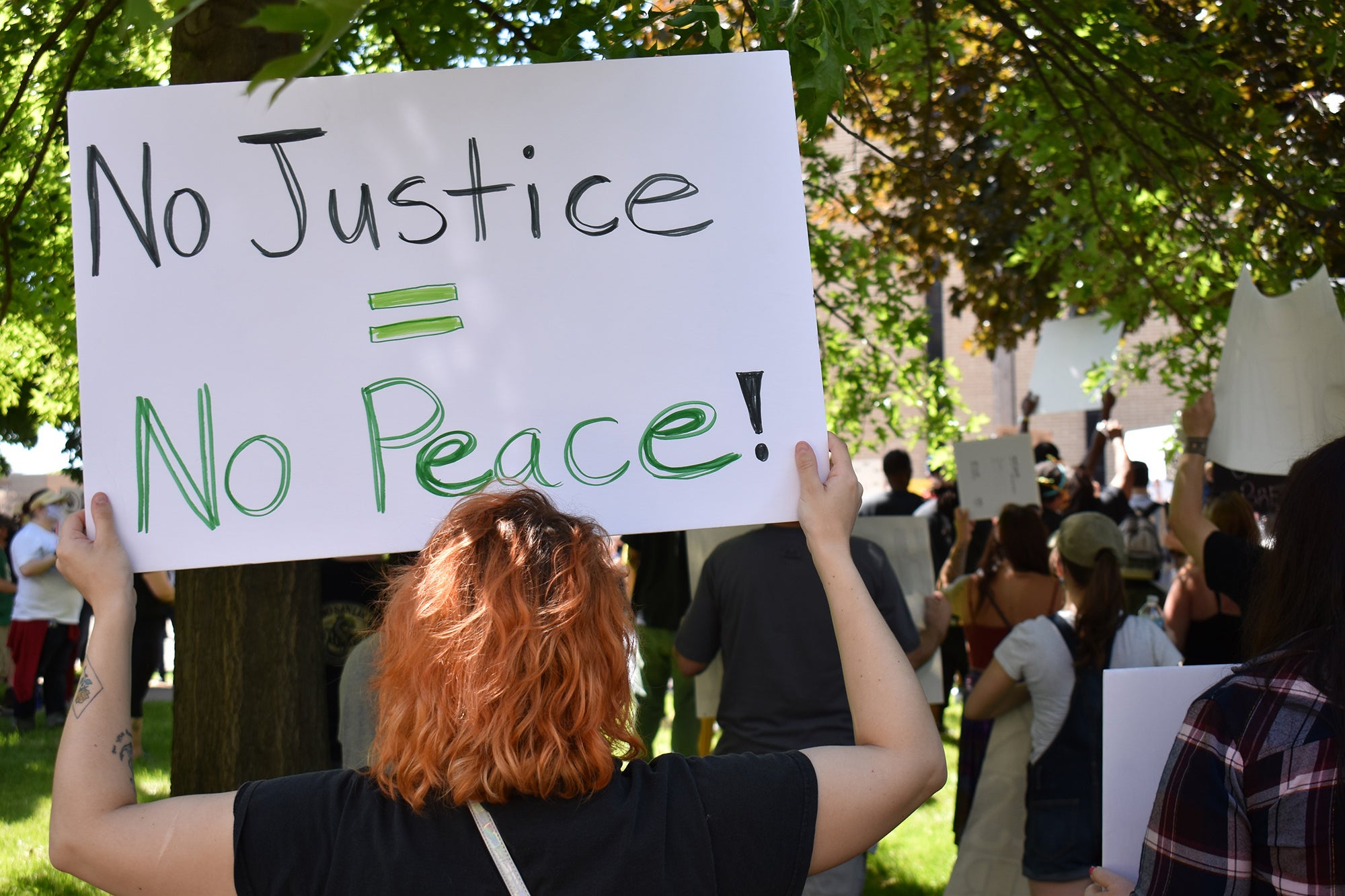 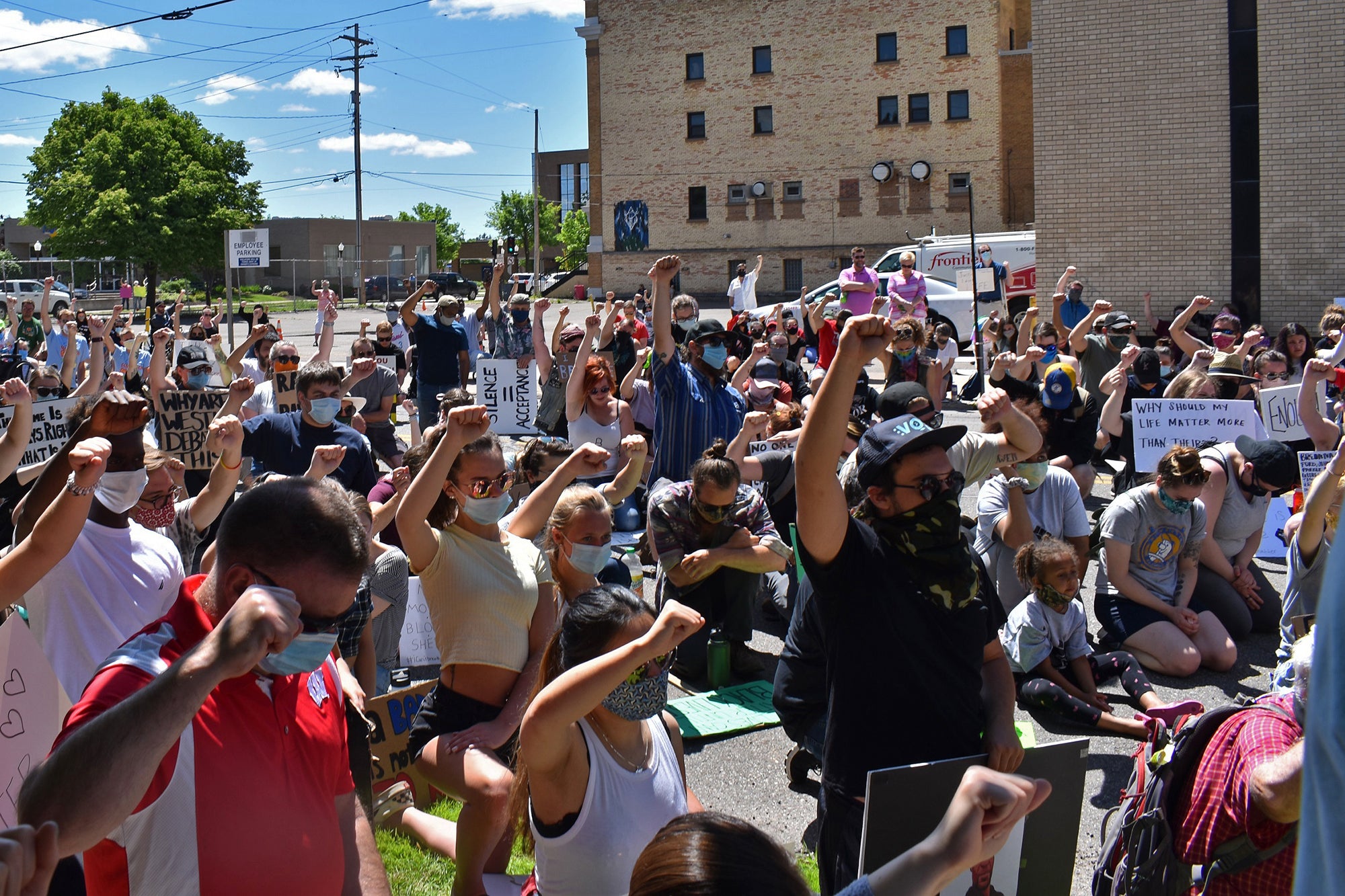 During the march, protesters crossed Scott Street Bridge and rallied in front of Wausau City Hall.

At one point, demonstrators took to their knees and held a moment of silence for 8 minute 46 seconds, representing the amount of time Minneapolis Police Officer Derek Chauvin held his knee on Floyd's neck.

Police provided water for protesters, and knelt during the silent observance.

McColley, who organized the event, said she felt a sense of joy and hope at the event.

"For everybody to have come out today and support us peacefully, like we asked — I am beyond thankful," McColley said. "I’m beyond proud of this community."

The event ended around noon, and the crowd dispersed soon after.

In Green Bay, protestors gathered at City Hall in support of Black Lives Matter. One of the organizers, Dajahnae Williams, 22, spoke to the crowd, highlighting the importance of passing policies that lead to structural changes.

"We need actual changes. It starts with the protesting, getting their attention ... it starts there. And it starts with us taking that and channeling that into something beautiful," she said Saturday.

In Ashland, a demonstration calling for justice for people of color and an end to "police brutality" was scheduled to begin at noon.

Milwaukee Police Chief Alfonso Morales said he's tired of people using the George Floyd protest to cause destruction and emphasized that violence against his officers must stop.

While a majority of protests have been peaceful, tensions have risen at times and police in Milwaukee have used tear gas on protesters and shot rubber bullets when they've felt threatened.

Morales on Friday repeated comments he’s made in recent days that his department isn't getting enough credit for successful implementation of community policing, following an ACLU lawsuit that resulted in a collaborative plan to improve the department.

"I think that when you lead with fear that is what perpetuates a lot of what we see happening in police interactions with black and brown folks because now you have police officers who are afraid for their lives because they feel like these protests mean them harm," Harris said, "when really we're out here protesting against a systemic issue and not a particular person."

Milwaukee Mayor Tom Barrett said Thursday he didn't support police officers' use of rubber bullets and tear gas against protesters. Barrett told WPR he wants a full review done whenever he sees a video or an incident that raises questions.