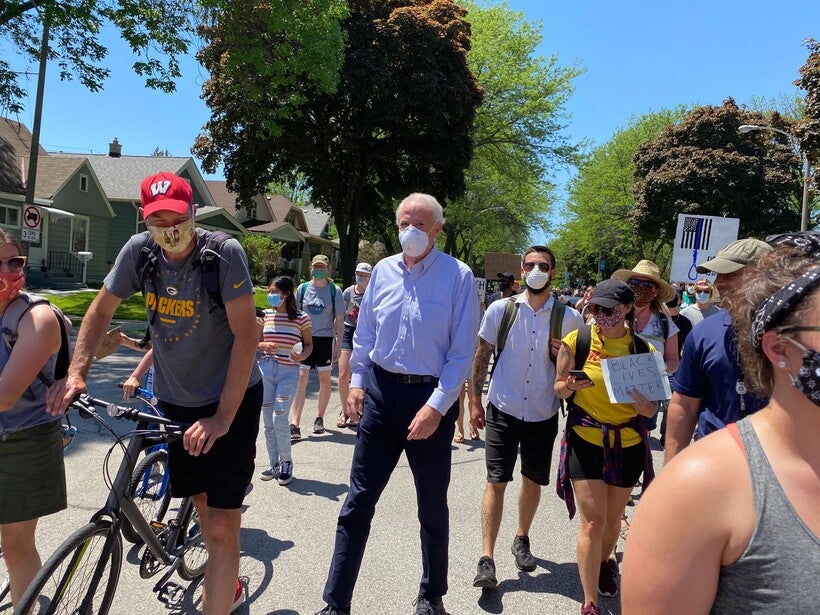 Milwaukee Mayor Questions Use Of Force By Police During Protests

For the last week, protesters in Milwaukee have marched the streets demanding justice for George Floyd, the Minneapolis man killed by police while in custody, and Milwaukee resident Joel Acevedo, who died from injuries following a fight with an off-duty Milwaukee police officer who was later charged with homicide.

Protesters are also looking for change to the systemic racism people of color have faced for centuries. They want more resources devoted to neighborhoods of color. And they want more transparency and trust from law enforcement.

Over the last seven days the protests have been mostly peaceful, but at times tensions have risen. Police in Milwaukee and Madison have used tear gas on protesters and shot rubber bullets when they have felt threatened.

In an interview Thursday with WPR, Milwaukee Mayor Tom Barrett said he wants a full review done whenever he sees a video or an incident that raises questions.

The Milwaukee Police Department did not respond to several interview requests by deadline. On Thursday afternoon, Milwaukee Police Chief Alfonso Morales was marching with protestors for the first time in seven days.

There have been several instances of Milwaukee police using tear gas to break up demonstrators.

On Tuesday, thousands of protesters started marching from Milwaukee’s south side to downtown at 1 p.m. After hours of protests in the oppressive heat, the evening became a tense standoff between Milwaukee police officers and protestors at the corner of West McKinley Avenue and North 6th Street, just north of downtown.

Barrett said he is unsure if the department has used tear gas before the demonstrations, but he is concerned it has been used too often during the recent Black Lives Matter protests following Floyd's death.

Barrett said in some instances the police have performed "very, very well" over the last week.

"It underscores the challenge we face here locally and in America right now," Barrett said. "They genuinely believe that they are following the accepted protocol for policing here locally and nationally. That goes to the very core of what the issue is."

Milwaukee police officers have been hurt. Two officers were hit by a vehicle Thursday during the protests, according to the department. Another officer was shot.

Mattioli was charged May 13 with first-degree reckless homicide after a fight at his home in April led to Acevedo’s death.

Mattioli has been suspended from the department and is still receiving his full pay and benefits.

The department continues to release the same statement about the case, saying it's up to the Milwaukee Fire and Police Commission (FPC) to fire Mattioli because they took over the police department’s investigation in May.

"As of May 19, 2020, MPD was advised by our oversight body, the Milwaukee Fire and Police Commission, to cease all current investigations moving forward regarding Officer Mattioli and that FPC would be taking control of the investigation and discipline," the statement reads.

But Barrett said Morales should have fired Mattioli as soon as the district attorney charged him with homicide.

Barrett said the commission is working on an investigation — but in his mind, the investigation has already been done, by the district attorney who decided to press charges.

"If an individual breaks the law and is charged with a homicide, it’s not even a close call," Barrett said. "To me that establishes a factual basis right there to terminate the employment of officer Mattioli."

In other cities, including Minneapolis and Atlanta, mayors have the authority to fire police officers. Giving mayors that authority in Wisconsin would require a change in state statute.

Barrett said he would be supportive of that, but right now he is focused on this case and what is happening in Milwaukee.

Morales will be having his performance review with the FPC later this month.

"The Chief’s management style and decision-making have been apparent during the past week, which has seen protests and civil unrest erupt in the city, the statement says.

Lewis, who is the vice chair of the city’s Public Safety and Health Committee, said Mattioli still being employed by the city underscores why people are protesting.

"It underscores the reason why people have a lack of trust in MPD, in the Fire and Police (Commission)," Lewis said. "It just further exacerbates people’s frustration, anger and outrage in the mishandling of this."

Lewis said police chiefs across the country have joined in on the protests, but Morales has taken a more divisive tone.

"When you have officers in riot gear that incites negative activity," Lewis said. "How about protect other things instead of just protecting police stations. Let’s ensure the community is safe. And if we allow the people who protest to walk with provocation, it is their right."