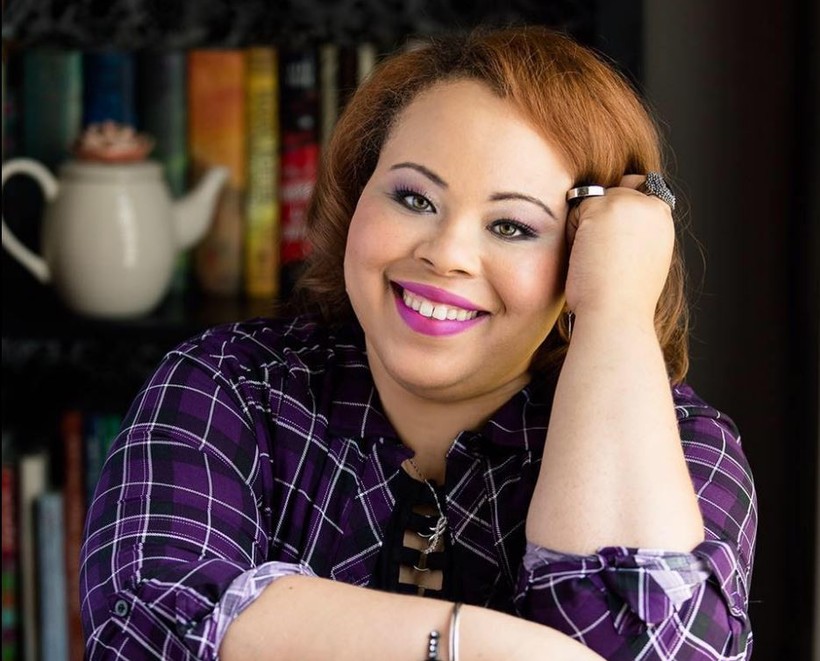 If L.L. McKinney isn't a familiar name in your literary world, get ready. She's coming your way.

McKinney is on a mission to create the kinds of powerful Black girl characters she always wanted to read about when she was growing up.

In 2018, McKinney made her literary debut with the YA fantasy novel, "A Blade So Black." It's a retelling of "Alice In Wonderland" with a Black teenage girl as the sword-wielding hero who slays monsters. This was the first book in her "Nightmare-Verse" series, which has been optioned by Lionsgate for a television series.

Now, the Kansas City-based author has branched out into the DC Comics universe with two books featuring the Black superhero Nubia, who originally appeared in a "Wonder Woman" story decades ago. As McKinney tweeted, "Y'all know I HAD to bring our girl to the main stage."

As you might imagine, McKinney isn't shy about speaking her mind. Last year, she made waves on Twitter with her #PublishingPaidMe hashtag, calling out the publishing industry for giving lower book advances to Black authors than their white counterparts. The hashtag was used thousands of times, and various well-known authors — including bestselling Black writers Roxanne Gay, Jesmyn Ward and N.K. Jemison — disclosed how much they were paid.

McKinney spoke with "To the Best of Our Knowledge" executive producer Steve Paulson about the story behind her breakthrough novel, "A Blade So Black."

"The book is for Black kids and Black girls in general," she said, "but that doesn't mean other people can’t appreciate it."

L.L. McKinney: Well, I had grown up loving science fiction and fantasy. And as a kid, I didn't have the ability to articulate what bothered me about this genre that I adored, that didn't adore me back. It was sort of like there's nobody in the world. And if they're in the world, there's only one of us. Like watching "Star Wars," you had Lando, but it's like I guess Black people hadn't been invented throughout all of space, just this one place, right?

Steve Paulson: So when you were growing up, there were no fantasy books with a Black girl as a kick-ass hero?

LLM: There were, but I didn't learn about them until college. We weren't taught these authors in school, so I didn't know Octavia Butler was a thing until college. And I loved all this type of stuff, and now, my sisters started having kids, and I'm looking at their kids who are falling in love with comics and science fiction and fantasy and all this stuff.

I will be damned if there's not at least one book that my babies can look at in the genre that they love to read. That's essentially what happened is my sisters had kids, and I decided to do something about their bookshelves.

SP: Let's talk about your book and the world that you have created. How would you describe your Alice?

LLM: My Alice is essentially a whole geek. She's a huge nerd. It's great. I love it. And she uses both that knowledge and her experience as a Black girl in America as her superpower. That's it. And so her self-esteem, her audaciousness to think that she can be big enough to kill monsters, is what lets her kill monsters.

SP: So the world that you've created ... There's the real world that we all know, and then there is this other world. It's dropping down the rabbit hole going down to Wonderland. Can you explain how these two worlds interact with each other?

LLM: Yeah. So, Wonderland is connected to the world of man because it is essentially the world of dreams. From the beginning of mankind and the subconscious mind, Wonderland has been around, and it's filled with everything that is part of the human imagination, both consciously and unconsciously. And so, they affect each other. Like if something bad happens in the real world, bad stuff pops up in Wonderland, and vice versa.

So Alice's job is to keep nightmares — physical manifestations of humanity's fears, and they pop up in Wonderland when something happens or if enough bad feelings kind of coagulate. It tries to get to the human world because humans are the source of its power. If it can cross over, it can cause all kinds of damage, from actually physically attacking people to affecting them, and then those people will start acting out and attacking people seemingly out of nowhere.

SP: I have to say this is just a great sort of taking off of sort of the whole idea of the subconscious, dreams and nightmares, making them real and part of our lives.

LLM: There's this notion that fear is a physical thing. It has a physical effect on people that we're finally starting to recognize and address. It's sort of like stress, how now, relatively recently, there's scientific data that stress causes physical ailments within people.

Fear does the same thing. So that's kind of what I was building on, this notion of fear being an actual danger to you.

In the book, we don't see it happen, but the characters talk about how there was a young Black girl who was around Alice's age. She was unarmed and killed by police. And Alice's community, the fear and the anger and the sadness generates two nightmares at once, which is a thing that Alice has never seen happen, and it's a fight that nearly costs her her life.

SP: So this Black girl who was killed, we never actually see it happen, but there are constant references to it. How does she figure in your story?

LLM: Brianne is from Alice's neighborhood. Alice's mother reacts by being scared for her own child. And so Alice is trying to be out here and do her superhero thing, but her mom is like, "Where are you going? Why aren't you coming home right after school? Why aren't you answering me?" And Alice could be like, "Well, I can't answer you because my cell phone doesn't work in Wonderland," but then you have to explain what Wonderland is. And of course, Alice's mom is going to be like, "You doing what now?" And if her mom believes her, then she puts the kibosh on the whole thing, "You're done. Like what do you think this is?"

Alice doesn't want to give that up because this is her way of coping with her own grief from the passing of her father, which happens on page one of the book. But Alice thinks about it a lot as well where she's like, "I'm doing this. I am a superhero, but at the same time ... I go home, nothing is different for me. I could wind up dead in a ditch somewhere."

SP: In Wonderland, she can get out her daggers and kill the beast.

SP: But that's different than living in Atlanta, and what happens to people that actually live there.

LLM: Right. I love talking about it because there's this thing where Alice is allowed to defend herself in a reality that's not ours. It's a dream essentially, for her to be able to defend herself.

There's this whole thing where self-defense only exists if you don't have dark skin, right? If you're not Black, you can defend yourself, but other than that you're the aggressor in that case. So, it has an entire effect on the book. It doesn't necessarily overshadow the book, but it's there. This is a book that is not about race and racism, but it's not completely divested of it, because that's life.