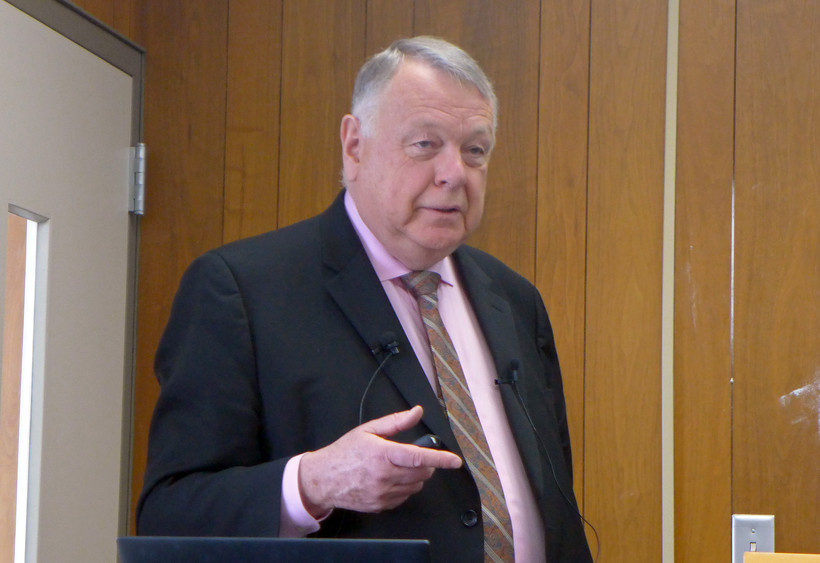 Wendell Primus, an aide to U.S. House Speaker Nancy Pelosi, who is working on legislation by the speaker that would allow the government to negotiate drug prices with manufacturers, spoke to UW-Madison's Institute for Research on Poverty Nov. 8, 2019. Shamane Mills/WPR

Aide To US House Speaker Nancy Pelosi: Americans Avoiding Medications Due To Cost

While a majority of Americans say prescription drugs have made their lives better, 79 percent say drug prices are unreasonable, according to a Kaiser Family Foundation poll conducted earlier this year.

Politicians at both the federal and state level are responding to these concerns with proposals to control drug prices.

"One in three Americans report that they’re not taking a medication due to cost," said Wendell Primus, health policy advisor to House Speaker Nancy Pelosi.

"Between 2008 and 2015, the prices for the most commonly used drugs increased 164 percent," he said during a talk Friday at University of Wisconsin-Madison's Institute for Research on Poverty. "I think this leads to unsustainable spending."

Earlier this year, President Donald Trump suggested importing drugs from other countries. Canada pushed back on the proposal, concerned about not having enough medication for its own citizens. And Primus said that wasn't a workable, long-term solution anyway.

While escalating prices for insulin and other commonly used prescription drugs have garnered a lot of attention, Primus said an avalanche of amazing but expensive new medications will force policymakers to confront the question of how the country will price drugs and who will have access to them.

Republican Sen. Chuck Grassley, R-Iowa, has a bill that will limit out-of-pocket costs for seniors in Medicare's Part D prescription drug program to $3,100 per year starting in 2022. Pelosi’s plan — that would let Medicare negotiate prices on 25 to 250 expensive drugs with their manufacturers — is expected to be taken up by the House in December.

One bill already proposed by Sen. Dave Hansen, D-Green Bay, would cap the price of insulin.

There’s also a bipartisan state bill designed to lower prescription drug prices through more transparency and regulation of pharmacy benefit managers. These are companies that negotiate prices with drug makers for insurers. Critics say those contracts lack transparency and that pharmacy benefit managers have rules that prevent consumers from saving money. For instance, there’s a so-called "gag rule" where pharmacists can’t tell customers it may be cheaper to pay out-of-pocket than use insurance for their medication.

In February when the bill was introduced, Senate President Roger Roth, R-Appleton, noted the two parties have big differences on the issue of health care, but he said there may be common ground when it comes to high drug prices.

"This is an area where you've got Republicans and Democrats who've come together, and we've agreed upon what I believe are some common-sense reforms that will have an immediate impact," Roth said.

The bill hasn't been scheduled for a hearing. Nor has the bill regulating out-of-pocket costs for insulin.