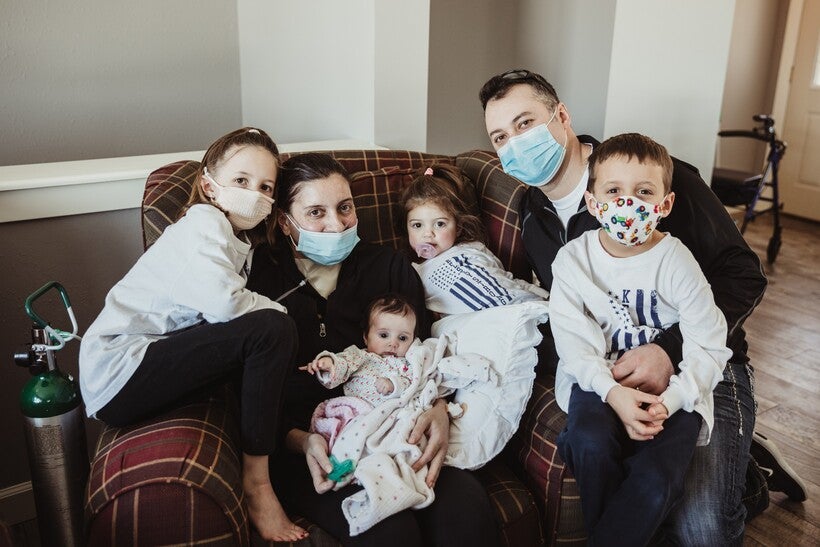 Kelsey and Derek Townsend with their four children. Kelsey gave birth to her youngest daughter while in a medically induced coma due to a severe case of COVID-19. Photo courtesy of Taryn Marie Photography

After Severe COVID-19 Complications, Poynette Mother Is Finally Home With Her Newborn And Family

Kelsey Townsend Gave Birth In A Coma, Spent Months In The Hospital
By Shamane Mills
Share:

In a pandemic where much of the focus has been on lives lost, a story where two lives were saved in one family stands out, especially when the survivors are a mother and her child.

Seriously ill with COVID-19, Kelsey Townsend was in a medically induced coma when she gave birth Nov. 4 to a baby girl at St. Mary’s Hospital in Madison. Three months later, she’s home in Poynette with her husband Derek Townsend and their four kids, including newborn Lucy.

The joyful reunion comes after a lengthy hospital stay where doctors considered giving 32-year old Kelsey new lungs because hers were so badly damaged.

Kelsey was diagnosed with COVID-19 in late October when she was 39 weeks pregnant. Her husband and their 8-year-old daughter also tested positive for the disease. They recovered, but Kelsey took a turn for the worse.

The morning before the baby was delivered cesarean section, Derek said Kelsey’s color was off and she was having difficulty breathing. When they arrived at St Mary’s, her blood oxygen levels were in the 40 percent range, Derek said. Normal oxygen levels are at least 95 percent.

"Having the baby inside her is what kept her going. I’ve been told by doctors we were hours away from a different outcome that day we went in," Derek told WPR. 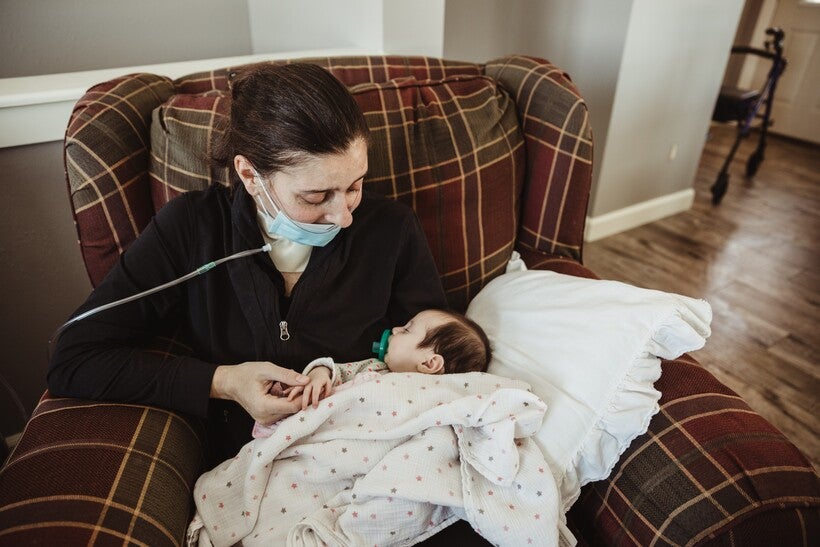 Kelsey Townsend holds her baby daughter Lucy. Townsend gave birth while in a medically induced coma due to a severe case of COVID-19. Photo courtesy of Taryn Marie Photography

Kelsey was put on a ventilator but her condition worsened, Derek said, so she was transferred to UW Hospital where she was put on life support. At one point, doctors considered a double lung transplant but eventually the organs began healing from the damage left by COVID-19.

"We don’t know precisely what allowed her lungs to start recovering after two months of severe disease," said Dr. Dan McCarthy, a cardiothoracic surgeon at UW Health. "Our hope is that we better understand the nuances in each individual patient and identify either treatments for the those who don’t recover early on or at least ways to identify which patients still have hope of recovery and which patients have truly irreversible lung disease."

The family doesn’t know how they were infected with the coronavirus. Derek said they had food and other items delivered, wore masks and didn’t visit family and friends. Their children had in-person learning at school, and Kelsey worked as an office manager for a Middleton company but had few contacts.

The Townsends are sharing their story in the hope others can avoid what they had to endure. They're encouraging people to take precautions and get vaccinated against what Derek calls a "relentless and an invisible enemy."

Kelsey is able to walk with assistance and is getting both physical and occupational therapy, but she’s on continuous oxygen at home.

In December, a fundraiser was held at KD’s Bar and Grill in Lodi. There is also a GoFundMe page for the family’s medical expenses.