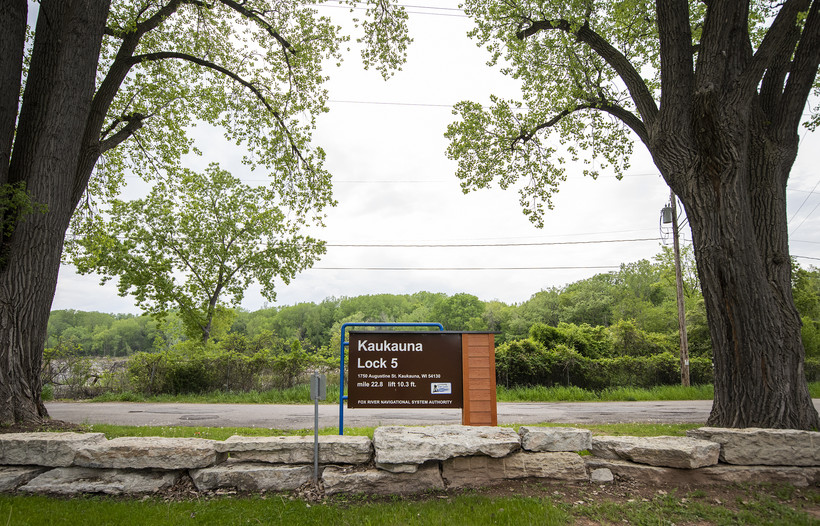 A sign indicates the location of Kaukauna Lock 5 on Thursday, May 20, 2021, in Kaukauna, Wis. Angela Major/WPR

Traffic through the Fox River Locks was up by about 5,000 passengers and 1,000 boats last year — an especially big increase considering it’s thought to be the only remaining lock system in the United States that’s still operated by hand.

The locks opened for the season on May 22, and the system is expecting another busy year.

That’s thanks to the reopening of the five Kaukauna locks in July, made possible by the repair of the Veterans Memorial Bridge. The Kaukauna locks will allow boaters to access an additional five miles of river that have been closed for more than 30 years, Cords said.

The locks are like elevators that allow boats to navigate elevation changes on the Fox River, which flows north because Lake Winnebago sits higher than Green Bay. The Kaukauna locks account for the system’s largest elevation change over the shortest span — about 50 feet in just 1 mile.

Construction on the locks began before Wisconsin was officially a state, Cord said. And soon visitors will be able to get a closer look at some of the locks and their history. The system is hosting a groundbreaking event this summer on a new interpretive trail that goes from downtown Kaukauna along the five local locks, allowing people to access areas that have been fenced off since the 1970s, he said.

North of Kaukauna, De Pere has cemented itself as the busiest lock since the Menasha lock closed in 2015 to prevent invasive round goby from entering Lake Winnebago, Cord said.

"We are doing everything that we can to work on that project of opening that back up again," he said.

But it’s complicated. The system is studying the effects of velocity and electricity on round goby, with hopes of reopening the Menasha lock in the next few years, Cord said.

Amid Increase In Boaters, The Wisconsin DNR Urges Safety

Over the last couple of years, the Wisconsin Department of Natural Resources has seen increased interest in outdoor activities, from state park stickers to hunting tag sales. The same is true on the water, said Boating Law Administrator Lt. Darren Kuhn.

"Boating is a very strong tradition in Wisconsin. We’re ranked No. 2 in the country for number of registered boats," he said.

But having a lot of inexperienced boaters on the water can lead to accidents. Kuhn encourages new boaters to take the DNR’s online boating safety course. It’s also important to check the weather and have a designated driver, he said.

State law requires that there’s at least one functional life jacket per passenger on board, Kuhn said.

"But we take it a step further. We would hope, we would encourage you all, or anyone that’s on a boat, to wear your life jacket, and it has to be the right size of life jacket," he said.

Life jackets should be snug and fastened, he said.