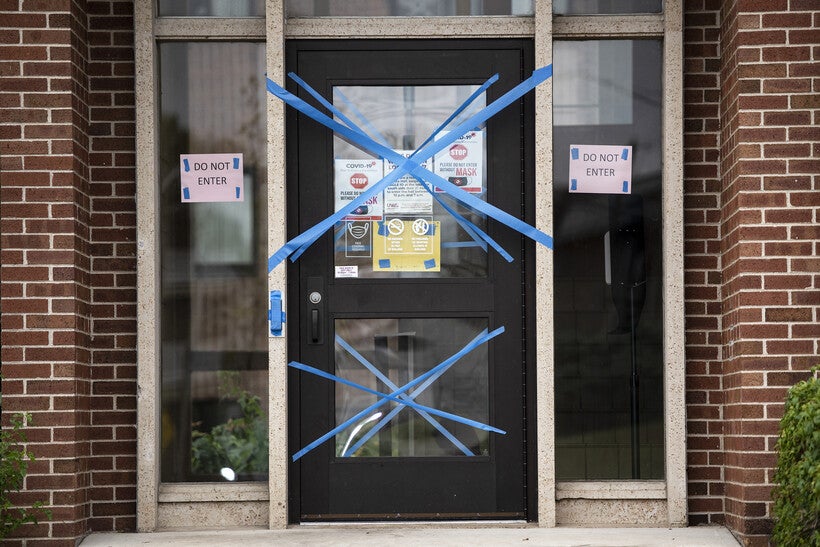 Tape blocks off the entryway to Coate Hall on Friday, Sep. 11, 2020, in La Crosse. Students living in the residence hall were ordered to shelter in place due to COVID-19. Angela Major/WPR

Three University of Wisconsin campuses are mostly back to normal after COVID-19 spikes forced administrators to halt in-person classes and quarantine residence halls for two weeks. So far, the number of students testing positive at UW-Madison, UW-La Crosse and UW-River Falls has decreased substantially.

UW-Madison Chancellor Rebecca Blank announced on Sept. 9 — one week after the start of the fall semester — that classes would go online from Sept. 14 through Sept. 25. The announcement came after the campus' dashboard showed 290 students tested positive for COVID-19 in a single day.

The next week, on Sept. 13, UW-La Crosse announced it was moving classes online for two weeks and ordering students in dorms to shelter in place. That day, the UW System COVID-19 Dashboard showed the campus reporting 105 positive cases out of 279 total tests for a positivity rate of nearly 38 percent.

Then, on Sept. 18, UW-River Falls temporarily paused in-person learning and quarantined dorms after 76 students were reported as testing positive by the UW System.

UW-River Falls Interim Chancellor Connie Foster said the decision to halt in-person classes and quarantine residence halls came after health officials noticed an outbreak in a dorm and were faced with having to test 350 students per day to stay ahead of the virus.

Foster said the two-week pause gave UW-River Falls time to bolster its testing capacity to between 250 and 300 per day and to more than double the number of campus contact tracers. She said the university also greatly increased the number of available rooms for isolating students by clearing out a residence hall and having them move to other dorms.

Foster said the university gave dorm residents the option to quarantine in their rooms or return home for the two-week period. She said about half of the residents left. Those that stayed were tested for coronavirus last week, Foster said.

"So now, phase two, we have the group that left for shelter in place," said Foster. "So, I'm guessing we're going to see a few more positive cases."

UW-La Crosse Chancellor Joe Gow said around half of the campus's dorm residents also left when classes moved online and quarantine orders went into effect. He said the situation on campus now is more manageable. Before UW-La Crosse announced the two-week pause, more than 70 percent of available rooms for quarantine and isolation were in use. This week, the campus reports 150 available spaces.

"That's been a relief," said Gow. "Because if we had people come back to the residence halls and had lots of positives and then we run out of quarantine, isolation (space), that would be a situation we would not want to be in."

In-person classes have been back in session for just more than a week at UW-Madison. Since then, the most cases reported in a single day for the school came on Sept. 30. when 19 students tested positive from a sample of nearly 1,600 tests.

"We believe it’s a combination of factors," wrote Jake Baggott, executive director of UW-Madison Health Services, in an email. "The pause in instruction and the quarantines made very clear to students what’s at stake. We’ve also put in place even stricter campus public health protocols (for example, requiring masks outdoors as well as indoors) and more frequent testing of residence hall students. And we’ve reduced residence hall populations by about 14 percent since the start of the semester."

Temporary pauses for in-person classes have been used by a growing number of universities around the U.S. On Aug. 18, the University of Notre Dame announced it would suspend in-person classes for two weeks. The university resumed all face-to-face classes Sept. 7.

Anita Barkin is the co-chair of the National College Health Association's COVID-19 taskforce. She said, anecdotally, the approach is definitely trending across the country but her organization doesn't have solid data on how many universities are using the approach or how effective it is. She said the NCHA is currently surveying universities to find out.

But she said even if campuses see caseloads decrease after temporary pauses, it's incumbent upon administrators to set good examples and enforce best practices proven to slow the spread of coronavirus.

"You need to continue to mask up, use good hand hygiene, physically distance," Barkin said. "All of those other strategies have to continue beyond the quarantine period so that you can sustain the effort."