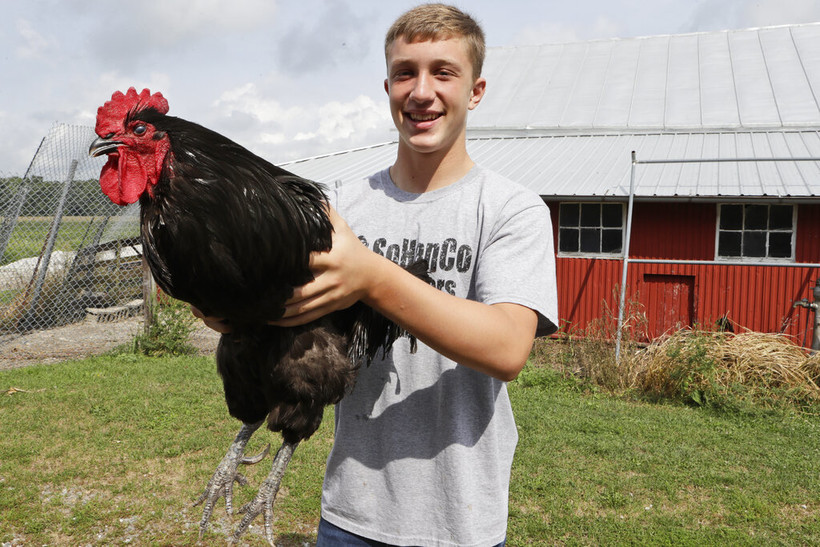 Eric Davis holds up his rooster, Spurs 2, at his grandmother's farm, Tuesday, Sept. 1, 2020, near Jenera, Ohio. Davis, a high school sophomore who's a member of a 4-H club, was bummed he didn't get to take this year's batch of chickens to the fair because he said they're the best he's had in six years. The Hancock County Fair was cancelled due to the coronavirus. (Tony Dejak/AP Photo)

After a month of no new bird flu cases, Wisconsin lifts order prohibiting poultry shows ahead of county fair season

Wisconsin poultry owners haven’t reported a case of bird flu in over a month. But state experts warn the threat from the virus is still present.

The last case of highly pathogenic avian influenza was in a non-commercial flock of 61 birds in Bayfield County on May 20.

On Monday, the state Department of Agriculture, Trade and Consumer Protection announced a statewide order prohibiting poultry at shows and exhibitions had been lifted. But DATCP spokesperson Kevin Hoffman said the order expired only because it had been 30 days since the last case, not because the threat from the virus is over.

"People might take that as a sign that everything's done, we can move on. But that's not really the case. We do think that as long as those biosecurity protocols are in place, that people can safely move their poultry to the shows and exhibitions," Hoffman said. "But we do still want to remind people that there are still positives in the wild bird population, so they should still be taking whatever measures they can to protect their flocks."

He said the state Department of Natural Resources confirmed more cases of virus in wild birds earlier this month. The agency has detected the virus in 131 wild birds from 48 counties in the state.

Ron Kean is a poultry specialist for the University of Wisconsin-Madison's Division of Extension. He said the influenza virus has historically died down in summer months, so bird enthusiasts are cautiously optimistic about the rest of the summer.

"We're hopeful that we're through this at least for now," he said. "Especially a lot of the small producers, exhibition breeders, things like that, I think are quite excited to be able to go back to having shows."

Kean said there is still some risk to birds at shows, but poultry owners already take steps to protect their birds from other diseases.

He said poultry owners should avoid sharing cages and feeders and should keep all equipment clean.

He said poultry owners should also quarantine show birds for a few days before returning them to the rest of the flock.

Hoffman said poultry owners should continue monitoring their flocks for avian influenza and reported instances of increased mortality and or other signs of illness. He said the state will also be keeping a close eye on spread, especially this fall when migratory birds once again travel through the state.