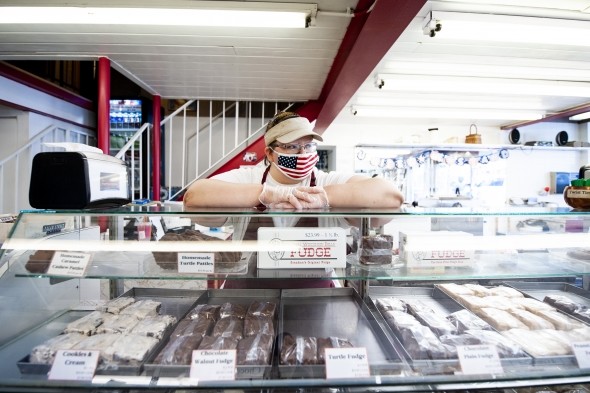 Barb Peasall, an employee at Original Wisconsin Dells Fudge, leans on the counter as customers enter the shop Monday, Aug. 10, 2020, in the Wisconsin Dells. Angela Major/WPR

'We Dug Ourselves A Big Hole. We’re Maybe Two-Thirds Of The Way Out.'
By Megan Hart
Share:

After Wisconsin’s economy made significant strides toward recovery following the downturn caused by the coronavirus, improvement has recently slowed. That’s according to Dr. Noah Williams, director of the Center for Research on the Wisconsin Economy at the University of Wisconsin-Madison.

On Wednesday, Williams spoke to members of the state’s chamber of commerce about Wisconsin’s economic standing.

Williams said he was hesitant to make many economic projections. Forecasts during the pandemic have been largely inaccurate, he said.

"During the lockdowns, the surprises were mostly on the downside, meaning conditions were substantially worse than people expected," he said. "During the recovery, most of the surprises have been on the upside."

Williams cited Federal Reserve forecasts from this summer that projected 10 percent national unemployment at the end of the year. It’s now below 7 percent. But while the recovery has come more quickly than expected, it’s recently stalled, and the state has settled into something more akin to a typical recession, he said.

"We dug ourselves a big hole. We’re maybe two-thirds of the way out," he said.

Compared to the nation, Wisconsin’s economy appears to be recovering more quickly from coronavirus, Williams said. The state’s unemployment rate was 5.4 percent in September, compared to 7.9 percent nationally, he said. Williams noted, however, that payroll data suggests there may be about 100,000 unemployed Wisconsinites who aren’t being counted in official unemployment statistics.

Most federal assistance programs related to the pandemic are either set to expire or have already ended. While some forecasters predict this will spell trouble for the economy in the coming months, Williams noted the stock market appears to be feeling "significantly more optimistic" than most academics.

Congress is at a stalemate when it comes to passing another round of stimulus funding, but if that changes, Williams said Wisconsin would likely benefit most from a scaled-back version of the Paycheck Protection Program that targets businesses in critical need of aid.

Williams also spoke about consumer spending Wednesday. Despite positive news this week surrounding the potential rollout of coronavirus vaccines, it’s likely the state’s leisure industry will struggle for at least six to nine more months, Williams said. Nationally, spending on events and attractions, including theme parks, movie theaters and concerts, is down 70 percent compared to last year, he noted.

But that doesn’t mean Wisconsinites have cut back on spending altogether. Private spending dropped dramatically in April, Williams said, but national data released Tuesday by the U.S. Census Bureau showed retail sales through October are up about 5 percent year over year.

Williams cited data showing Wisconsinites are visiting the store less often than before the pandemic, but spending more when they do. They’re also making more purchases online, which can pose challenges for local retailers.

Williams served as an informal advisor on former Gov. Scott Walker's presidential campaign, according to a column published by Forbes.