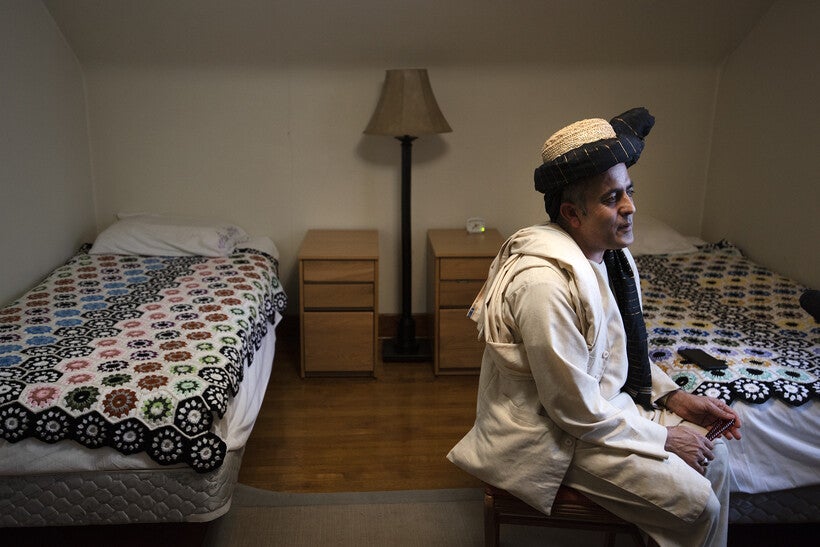 Afghan refugees in Wisconsin reflect on what they have left behind, challenges ahead as they start new life in the US
By Hope Kirwan
Share:

Sher Khan and his family arrived at Fort McCoy in western Wisconsin at the beginning of September.

They were part of the roughly 120,000 people evacuated from Afghanistan in August of 2021 as the U.S. military withdrew and the Taliban, an armed Islamist group, took control of the country.

Many of those evacuees ended up at U.S. military bases like Fort McCoy, where they filled out immigration paperwork, met health requirements and have been waiting for resettlement placement with one of the nine refugee resettlement agencies in the U.S.

When Khan arrived, Fort McCoy was nearing its maximum number of evacuees of almost 13,000. Now, numbers at the base have dwindled to fewer than 3,000 people, and officials at the base expect to have everyone resettled by mid to late February.

Khan said his family was scheduled to leave in early January for their new home in Massachusetts, but they had their trip canceled after someone in their barracks tested positive for COVID-19. When he spoke with WPR on Jan. 12, Khan said they were eagerly awaiting a new travel date and the chance to return to a more normal life.

On Jan. 13, they finally made the trip to Massachusetts.

But Khan and other Afghan refugees know that getting to their new homes in Wisconsin and across the country is just the first of many challenges they’ll face as they establish their new lives. 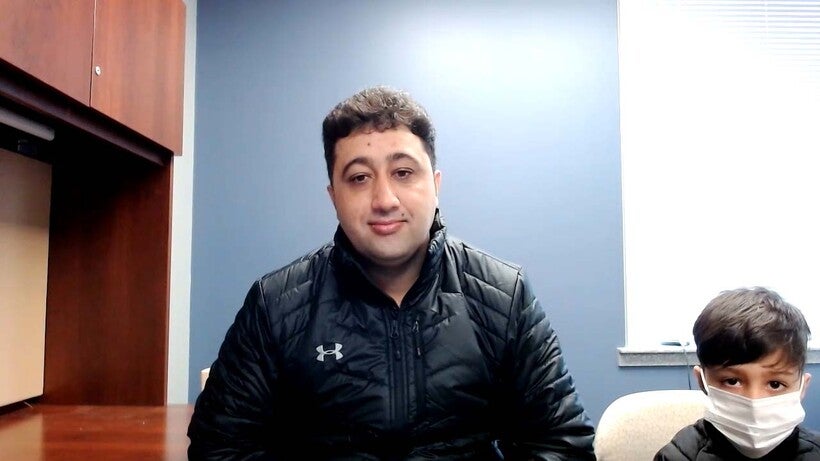 Sher Khan, a journalist from Afghanistan, sits with his son Eman for an interview on Zoom at Fort McCoy on Wednesday, Jan. 12, 2022. Khan and his family are some of the last Afghan evacuees waiting at the military base for their resettlement placement in the U.S. Hope Kirwan/WPR

'When we came here, we lost control of almost everything'

Khan grew up in a rural village in Afghanistan before moving to the country’s capital to study literature at Kabul University. After graduating, he worked as a radio news anchor, wrote for several local papers and translated English books into Pashto, one of two official Afghan languages.

In 2020, Khan started working for a company with ties to the U.S. government. That connection proved invaluable when his company helped secure a spot for his family when the U.S. evacuated their allies in August.

Khan said he never imagined leaving his home in Kabul. But his work made him a target of the Taliban, and he felt his children would have few educational opportunities under the group's rule.

"Everyone who doesn't think like them is an enemy to the Taliban. For the basic reason of living in Kabul, you can get killed for that," Khan said. "There is no hope of a future for the people."

Now months later, Khan said walking away from his life in Afghanistan hasn’t been easy. Especially as he and his wife face the realities of starting over completely.

"I was part of the middle class. Because I had job, I had house, I have family and friends, relatives and connections with people who were somehow in power. But when we came here, we lost control of almost everything," Khan said. "I know I survived. This is a big deal to survive. But still, as a human being, my instinct is to help others. My instinct is to make a difference."

After working multiple jobs in Afghanistan, Khan spends most of his time at the base reading books or watching movies. He’s eager to start applying for journalism jobs and hopes to one day work for Voice of America, a U.S.-owned news and information service headquartered in Washington, D.C., that provides international programming in languages like Pashto. 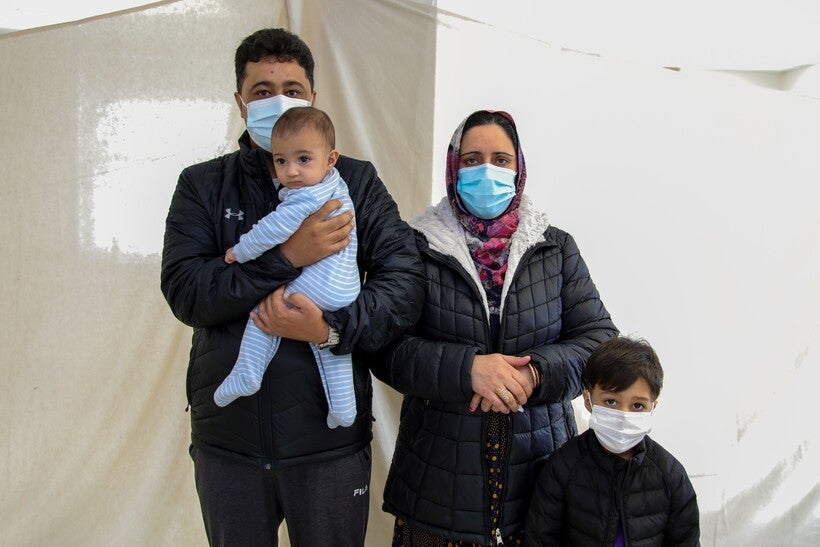 Sher Khan and his family at Fort McCoy on Wednesday, Jan. 12, 2022, the day before they left for their new home in Massachusetts. SGT Yesenia Barajas/U.S. Army

He said the hardest part of his journey has been the change from having a house and space for his three young children in Afghanistan to living with several other families in one of the military base’s barracks where there is little privacy.

"People from different backgrounds came here. Sometimes it’s noisy inside, sometimes we don't get along well because, for example, one person may listen to music and other person may have an intention to read a book. So, it gets messy sometimes," he said.

As he thinks about finally getting settled in his new home in Massachusetts, Khan said he is most worried about getting through the first few months and the culture shock that will inevitably come from living in a new country. And he said his family won’t be alone in needing time to adjust to the culture shock.

"I might speak English, that's understandable. But that doesn't necessarily mean I know every single thing about the culture. That's why some people, including me, might behave strangely," Khan said. "It is not easy. But I think the generous support of the community members can make that transfer from one life to another life easier." 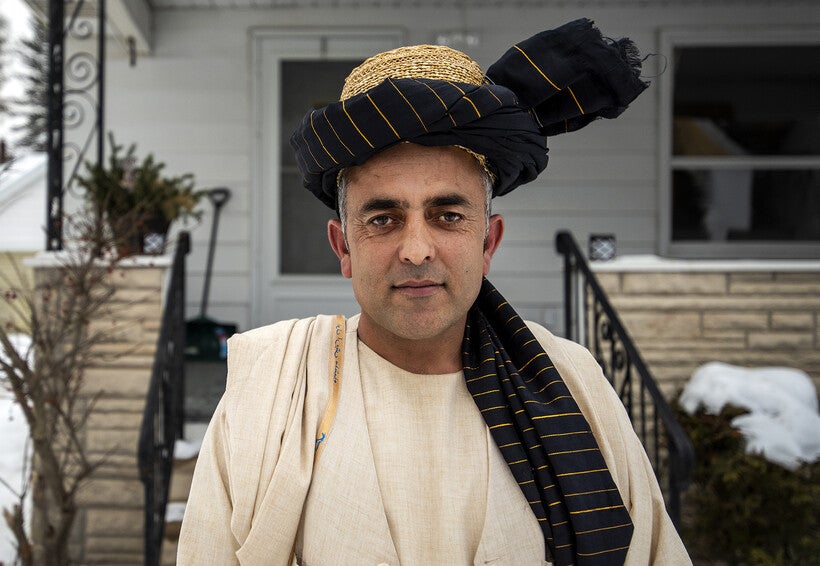 Matiullah Matie stands in front of his home Thursday, Jan. 13, 2022, in Wausau, Wis., where he lives with his wife and six children. Angela Major/WPR

A new home in Wisconsin

That culture shock is something Matiullah Matie and his family are still navigating a month after arriving at their new home in Wausau. Matie said there are a lot of new systems to learn, like American traffic signals.

When Matie arrived at the airport in Wausau last month with his wife and six children, a crowd of people including local officials and faith leaders were there to welcome them.

"I told them, 'This is like my wedding night.' I did not feel that I am out of Afghanistan," he said. "So the Americans are a faithful people, especially Wausau is really beautiful."

Matie is from Lashkar Gah in southern Afghanistan, a city he said Afghans call "Small America." He was a tribal leader and worked for the U.S. Marines from 2009 to 2014, helping to hire workers for local infrastructure projects.

Matie said he hoped that one day he would be able to come to America. He was eligible to apply for a special immigration visa in 2011, but he decided to stay in his home country at the time. His feelings changed when the Taliban took over Lashkar Gah and the rest of Helmand province in early August.

"I was in Kabul with my family when they killed my brother’s daughter, and they burnt my place (in Lashkar Gah). I knew that they don't want me to be alive," Matie said.

Even though his work with the U.S. military made him a target of the Taliban, Matie said he doesn't regret it. He calls Afghanistan and the U.S. "two hands of one body" and said his parents always encouraged him to help the American troops because of their past aid during the Cold War era.

When the Taliban arrived in Kabul last August, Matie said he moved around, spending each night at different friends' houses. His family got on a plane shortly after the capital's collapse, but their journey was still difficult even after leaving Afghanistan. Matie said living in crowded conditions with other evacuees at Fort Pickett in Virginia was hard on his family and there were many tears shed over leaving their home.

Now, Matie and his family live in a small two-story home within walking distance of a bus stop and grocery store. He’s enjoyed spending time getting to know people in Wausau, visiting them or welcoming them to his new home for tea. He hopes to open his own business in Wausau, either related to his previous work in distribution or a small restaurant. He's looking for potential investors or a grant to help him get started. 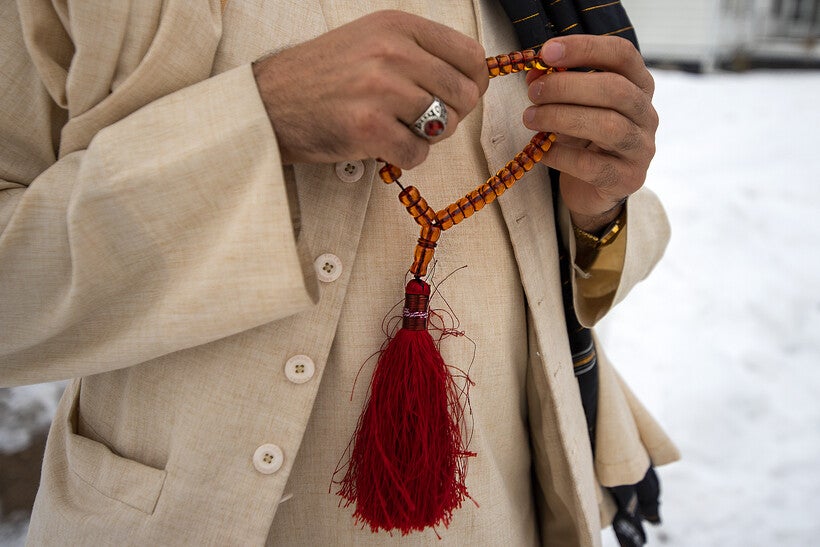 Matiullah Matie holds beads as he stands in front of his new home Thursday, Jan. 13, 2022, in Wausau, Wis. Angela Major/WPR

The path to permanent residency

Matie said his biggest worry about the future is the uncertainty still surrounding his immigration status. He said it’s taken a lot longer than he expected for the federal government to finalize his Special Immigrant Visa, or SIV, and give him a clear pathway to a green card or citizenship.

"That is not only difficult for me or a problem for me, that is the problem for all of us. Especially for those people who can't speak English, they are like blind," Matie said.

Grant Sovern is an immigration attorney in Madison and is on the board of directors for the Community Immigration Law Center, which has been helping Afghan refugees in Wisconsin navigate the immigration process.

He said it's especially complicated for people accepted to the U.S. with parole status, which isn't frequently used but allows a person to stay in the country for two years and obtain a work permit.

"Everybody assumes they're refugees, they get to come to the U.S. and they can stay like refugees. But that is not at all the case," Sovern said. "They have two years and if nothing else changes, they have to leave."

Based on his experience working with Afghans at Fort McCoy, Sovern estimates only 30 or 40 percent of people qualify for an SIV. Another small percentage of people are eligible for special designations created for Afghans through the U.S. Refugee Admissions program called Priority 1 and Priority 2.

But Sovern estimates 50 to 60 percent of people will have to apply for asylum in the U.S. That process is usually done while the applicant is outside the country, and Afghans will likely have to prove they face the threat of persecution if they return to their home country.

Like Matie, Sher Khan said he has applied for an SIV because of his work on U.S.-funded projects. He's hopeful the visa will allow him to get a green card, or permanent residency, much faster than the people who are applying for asylum.

Sovern said Congress does have the option to pass legislation to create an easier path to permanent residency for Afghan evacuees. But he thinks that’s unlikely given how controversial immigration issues have become in the U.S.

Matie said he is still hopeful the policymakers of his new country will take action, especially local and state officials.

"They should kindly send the concern about these kinds of difficulties to those departments who can change the articles of the law, who have the authority to change the law. So then it will be easy for me," Matie said.

He said having a green card would allow him to travel one day and give him more security as he works to rebuild his life.

This story is part of a PBS Wisconsin/WPR WisContext collaboration, utilizing reporting, research and community-based expertise to provide information and insight about issues that affect Wisconsin.