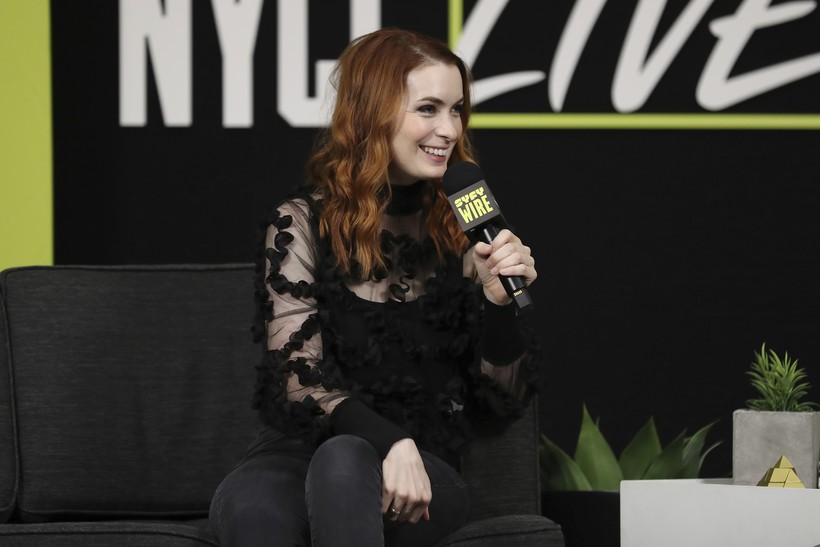 Actress And Writer Felicia Day Tells Us To Embrace Our Weird

Day: 'Creativity Is Work But It Can Be Playful Work And The Work Is The Reward'
By Doug Gordon
Share:

Felicia Day is best know for her work in the web video world, both in front of and behind the camera.

She co-starred in Joss Whedon's internet musical, "Dr. Horrible's Sing-Along Blog." She also created and starred in the pioneering web series "The Guild." And she's appeared in such TV shows and films as "Supernatural," "The Magicians" and "Mystery Science Theater 3000."

Day is also an author. Her latest book is called "Embrace Your Weird: Face Your Fears and Unleash Creativity."

"I was really inspired over the years by how many people came up to me and told me that the things that I do online and offline inspired them to be more creative," Day told WPR's "BETA." "I actually wrote a memoir called ‘You’re Never Weird on the Internet (Almost).' 'And I told my story of being a strange, homeschooled girl who went to college way too early and then moved to LA just expecting to be a star. And it didn’t quite work out that way."

In the memoir, Day writes about all of the obstacles she encountered after moving to Los Angeles and how it led to her making her own web series way before anyone was creating that type of content. That web series — "The Guild" — made her career.

"When I told that story, a lot of people would come up to me after reading the memoir and say, 'Hey, I started making things because of you. I started writing or making art,'" she said.

Between hearing those stories, and getting help for the anxiety and depression Day was dealing with, Day was inspired to write her second book.

"Inspiring people to get over those sort of humps and obstacles themselves made me want to make another book that was more about the reader than just about my journey," Day said.

"Embrace Your Weird" takes the form of a workbook, complete with many whimsical sketches and a lot of hands-on exercises for the reader to delve into — making it an immersive, interactive experience. The result is that it gets the reader creating right away.

"I think I originally conceived it more as a workbook and less of writing, actually," Day said. "I have a small daughter and I was reading books about how we learn and how when you get your body into something physically, especially when you’re writing or just doing, you learn it a lot easier. You learn it a lot more organically and it sticks with you. And so I knew that kind of the process of doing while reading was going to be really important to me."

"I’m a person who lives online. My audience is always one click away from me," she continued. "And so having that relationship with my audience where I talk about something like procrastination and then I hand it over to the audience, 'What are you going to do with what I just said? Let’s play together.' Having that sort of online interaction in a book form was kind of challenging. It was very challenging to crack the format of it. But when I did, I was like, 'Oh, this is exactly what I wanted to make.'"

As Day writes in the book, "Playfulness is at the root of all creation." This is the reason why she employed a very playful, stream-of-consciousness writing style that includes a lot of comic riffs and humorous tangents. This approach also helps take some of the intimidation out of being creative.

"I’m here because I’ve read self-help books over the years. I did '(The) Artist’s Way.' I did a lot of other books that kind of helped me get over my barriers and the blocks that I had to get my voice out there. And after I had a baby, I kind of fell apart again because I had to reinvent myself," she said.

Day says that creating "Embrace Your Weird" was kind of analogous to putting herself back together again.

"The core of it is about finding your identity in a playful way," Day explained. When she revisited those books that had resonated with her earlier in her life, they didn't affect her the way they originally had.

"I wanted to write my version that was a little less lecturey, a little less spiritual in a sense, and just fun," Day said. "Because at the heart of it, if we’re playing, we’re doing something organic to ourselves. We’re doing something because of the joy of it, because in looking at my toddler, I realize everything she does is creative, and it’s all out of joy. There are none of these rules that we learn in life. And I wanted people to kind of unlearn all those rules."

In her book, Day writes that we all have our own unique ideas and ideas that make us "weird." For her, weird is also what makes her — and her readers — unique.

"I came to prominence in a sense when I started writing a web series about gamers. It was called ‘The Guild.’ I wrote and I acted in it. I produced it, I uploaded it to the internet," she said. "Getting my voice out there in a way that other people said, ‘Oh, people don’t want to know about that. They don’t really understand gamers. They don’t believe that you’re a gamer because you’re a woman.’ All those things. And being brave and just kind of leading with that. I actually made my career in a sense."

Day described one of her favorite exercises: drawing a toolbox. In it, the reader is meant to draw all of the things that make them stand out.

"That’s essentially your creator toolbox. So whenever you start to create something, you should look in your toolbox and see, ‘Oh, what is it that makes me unique? How is my perspective on the world as an individual going to stand out?’ That’s what we should mine for our artistic endeavors," she said. "No one ever shared a video because it looked like every other video they watch, right? They share it because it’s unique and it pops out and they learn something about themselves or the world. You know, I think in life, we’re dissuaded from leading with our weirdness but really that’s where our greatest fulfillment comes."

Day concludes: "I was a homeschooled kid, I went to college really early. I love board games, I love dragons. I don’t like to go out at night. I love cooking. There’s a lot of different things that make me kind of stand out from the average person. And we all have that. And so those are our strengths that we should really dive into because when we love those aspects of ourselves, I think it’s when we feel most settled and happy."