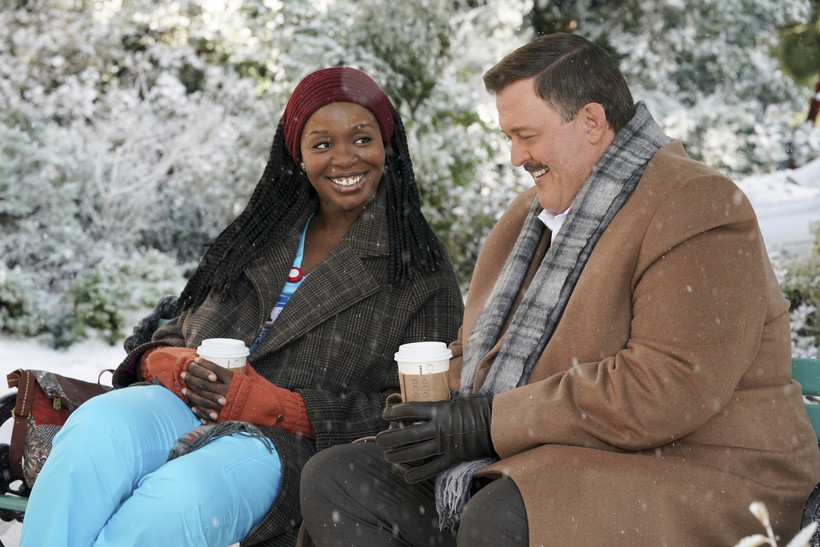 Actor Folake Olowofoyeku On Her Journey From Nigeria To Hollywood

Moving To US Leads To Her Lead Role In The Sitcom 'Bob Hearts Abishola'
By Doug Gordon
Share:

Since immigrating to the United States at the age of 18, Folake Olowofoyeku has made a name for herself in Hollywood. She's guest-starred on such TV shows as "Westworld," "Transparent" and "Modern Family." Now she's co-starring in the CBS sitcom, "Bob Hearts Abishola." The show was created by "The Big Bang Theory's" Chuck Lorre.

"Our show is a 30-minute comedy about Bob, a compression sock salesman, who has a heart attack," Olowofoyeku told WPR's "BETA." "And during his recovery, he crosses paths with Abishola, a Nigerian immigrant nurse. And he takes an interest in her and moves about trying to pursue her. A couple of our episodes will be focused on that. And then it takes a turn. I wouldn’t say exactly what happens. You have to watch the show to find out. But we explore the immigrant experience, specifically we explore the Yoruba Nigerian immigrant experience in America, which also correlates and is also the universal immigrant story, I believe."

"Abishola, like me, is a Nigerian immigrant of the Yoruba tribe," Olowofoyeku said. "Unlike me, she has moved to America with her son for a better life for him. Specifically, she wants him to go to an Ivy League school and become a doctor. That is the traditional Nigerian way. You’re either a doctor or an engineer or a lawyer or ... a failure."

According to Olowofoyeku, the biggest difference between her and the character of Abishola is that she is not as disciplined.

"She’s also a bit more traditional than I am, which is not a bad thing. It’s just who she is. At some point, I think I used to be more like that and I grew out of it. We probably have more in common than not, I think," she said.

Olowofoyeku says she draws on her mother, her aunts and the other women she grew up around in Nigeria to create Abishola's character.

"I draw from all of them, their mannerisms. I can’t say exactly what I get from whom, I just have created this library of information that has fed the character. A bunch of them are still alive and they’ve seen it and they’re all very proud. And wish my mom could see it and my father could see it, as well," Olowofoyeku said.

Olowofoyeku comes from a big family, she's the youngest of 20 children.

"A bunch of my siblings had already had kids of their own, some grandkids before I came into the picture. So most of them were out of the house. My eldest brother I think is in his mid-70s right now. And my Dad would have been a hundred and something. And my brother before me and I, we didn’t really get along. A lot of times, I felt like an only child. And apart from that, I was in boarding school from about 10 years old."

"I just thought I was here on vacation. But something intuitively alerted me that it might be the start of a new chapter. What aided the transition was that my results were stolen in Nigeria to get into university. Sometimes people steal it or give you the wrong information so that you can give them money. And when I found that out, I told my mom, 'It’s impossible that I failed. I know I didn’t fail. And if you’re telling me to do it again, I’m never going to go to school," she recalled. "That’s like the worst threat you can give a Nigerian parent. Like I’m not going to school unless I can stay here in America."

Olowofoyeku has no problem choosing a favorite from the many television guest-starring roles she has had.

"I’m very proud of the work on 'Transparent.' I learned a lot outside of the show, delving into the research around my character and what she was experiencing in Palestine. I’d heard about (the conflict) in passing but I’d never done any research into it. And I remember (executive producer/creator) Jill Soloway and producers had experts on the set who spoke to us about what was going on." Olowofoyeku played an activist named Lyfe who became the love interest of one of the main characters during Season 4.

When she's not busy with her acting career, Olowofoyeku creates electronic music, which she describes as "Afro electro-folk rock."

"Afro electro folk rock. Afro because percussion is very important to me. That’s what really gets me into the vibe — the talking drums, the congas, all African percussion," she said. "I am deeply into Slash. His riffs, his melodies are just so beautiful. And I like to incorporate that with the African drums. And sometimes that manifests itself as a folk track or a popish rock track. But the main elements are electric guitar, an Afrobeat and sometimes I just pull out the guitar and just rock with the percussion."