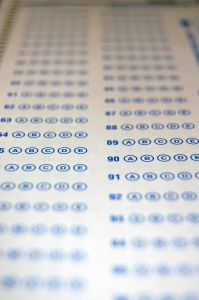 Every public high school student in the state would take the ACT college admissions exam under a proposal announced Wednesday by the Wisconsin Department of Public Instruction.

Under the plan, in 2014 the ACT would replace the Wisconsin Knowledge and Concepts Examination that is given to tenth graders in the fall. State Superintendent Tony Evers announced the budget initiative at a news conference in Pewaukee this morning. Evers said, "I think that this a huge step forward for the state of the Wisconsin to consistently deal with college and career readiness at the middle school and high school level and get our kids prepared for career and college in a real significant and important way."

Pewaukee High School has been using the ACT testing suite for two years, and Superintendent JoAnn Sternke is hoping to see the testing go statewide. "I like the idea that it becomes the state test at the high school level and that there's progressive tests before. In the years that we've been doing EXPLORE and PLAN it's the highest gains we've seen on the ACT and that's not by accident. It's because students have had practice at it. It's progressive."

DPI is estimating that administering the four tests would cost the state about $7 million. The plan would have to first be approved by the state legislature and Governor Scott Walker before taking effect.