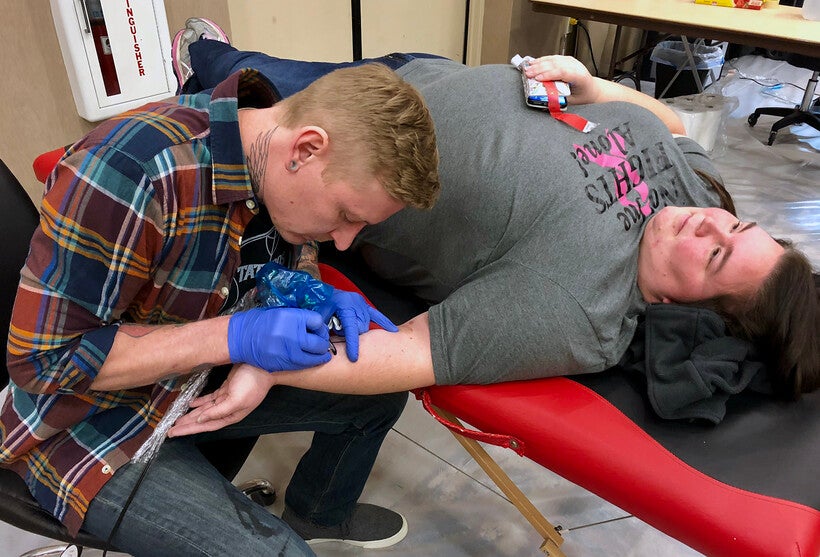 Across Wisconsin, Tattoos Are Used To Brand Victims Of Sex Trafficking

Survivors And Others Seek To Raise Awareness Of Branding And The Signs Of Sex Trafficking
By Danielle Kaeding
Share:

Nancy Yarbrough didn’t feel like she could tell anyone about the sexual trauma she experienced as a child. As an attempt to cope, she started drinking and smoking marijuana at a young age. By the time she was 17 years old, Yarbrough was addicted to crack cocaine.

"My best friend at the time was maybe about 20 years older than I was and her boyfriend was like the biggest drug dealer and her brother was a pimp. He had another brother that aspired to be one apparently because he set eyes on me," Yarbrough said.

At the time, Yarbrough thought being paid for sex would — in a way — make up for the things that had been taken away from her.

"And to have the 'so-called' love of this guy that really said that I was his everything, but not really knowing that I was just his commodity," she said.

On the weekends Yarbrough would leave her mother’s home in Milwaukee and head out on the road with her pimp and other young women. They went to neighboring states and wherever there was money to be made, including truck stops on Interstate-94. Yarbrough remembers one of the women she was working with had a tattoo.

"She had a bunny — like a playboy bunny — in the nape of her back and his girls had those," Yarbrough recalled.

Several years after working together, one of the women Yarbrough had worked with helped her leave her pimp. Since then, Yarbrough has transformed her life through faith and counseling.

Now, the mother of five provides resources and services to women and children who are victims of sex trafficking through the Milwaukee nonprofit she founded called Fresh Start Learning, Inc. Yarbrough said she sees young women every week similar to those she worked with at truck stops who bear the signs of branding. 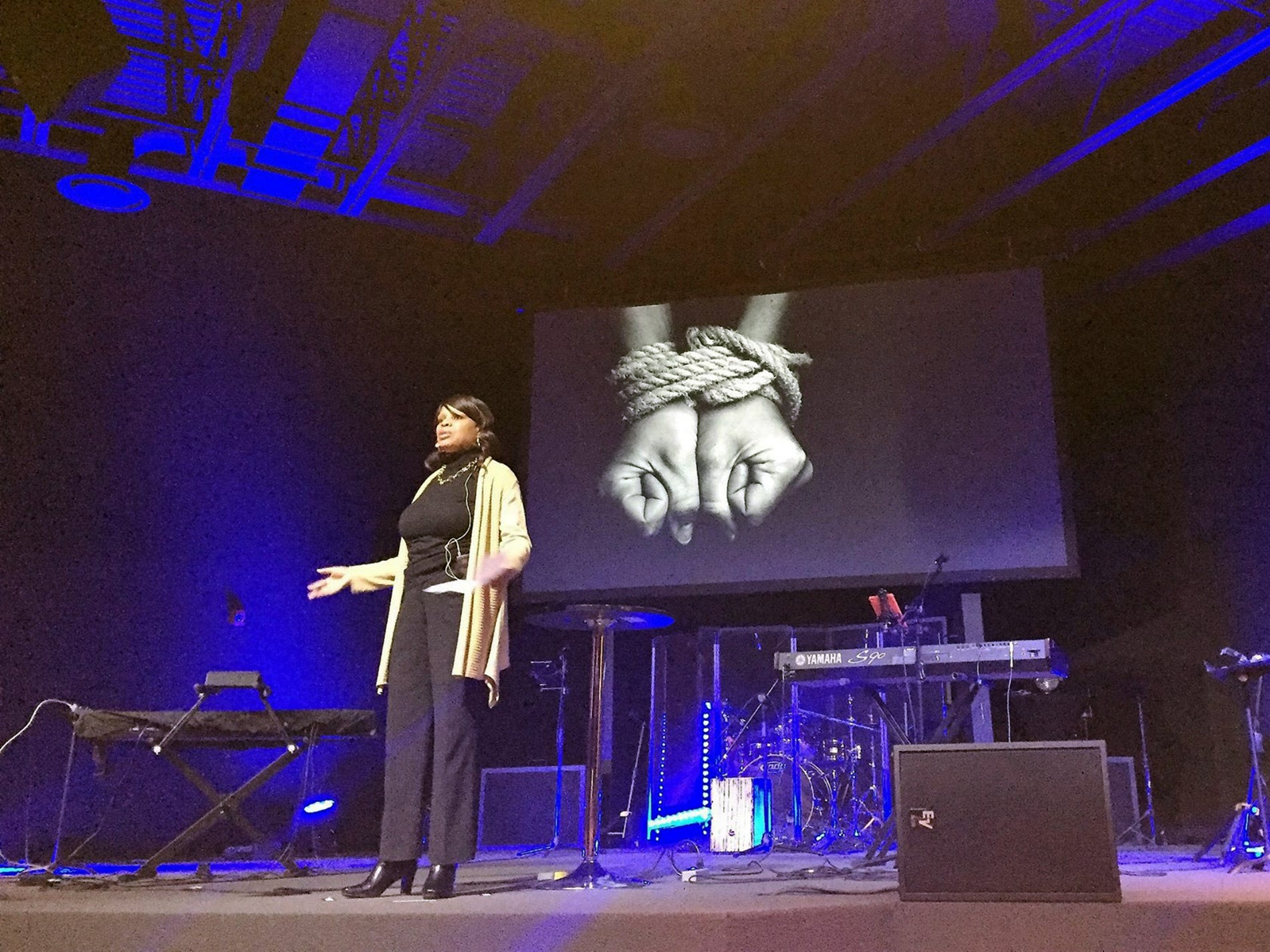 Nancy Yarbrough, a survivor of sex trafficking and founder of the Milwaukee nonprofit Fresh Start Learning, Inc., speaks to a crowd. Photo courtesy of Nancy Yarbrough

While Yarbrough was not branded, she said the practice is common in the sex trade, in which both men and women are given, or willingly seek out, tattoos to show they belong to a specific trafficker.

"You have the men that actually have what they call a stable of women — meaning more than three women — that are underneath him and he tattoos them either with his nickname or a dollar sign," she said.

It’s not uncommon for women and girls working under one trafficker to have the same tattoo, said Morgan Young, victim services training officer for the Office of Crime Victim Services within the Wisconsin Department of Justice. She trains people how to spot the signs of sex trafficking, like the tattoos used to brand victims.

"We see a lot of tattoos around loyalty or the name of the trafficker," said Young. "Sometimes it’s something as blatant as barcodes or money signs saying that person is for sale."

Young talked about branding at a recent event in Stevens Point called Tattoos for Triumph.

Ally Burke first held the event last year to raise money for survivors by offering discounted tattoos while also teaching tattoo artists and other community members how to recognize the signs of sex trafficking. The Stevens Point mother of five said she hasn’t been branded, but knows what it’s like to bear the marks of a painful past.

"I am a survivor from rape. I have scars from the fight. When I heard about trafficking and brands, I know how important it was for me to have that ugly past get covered up by something beautiful," said Burke.

Following last year’s event, Ally Burke and her husband Morgan Burke founded Shielding Survivors Tattoo, a nonprofit that connects survivors of sex trafficking with tattoo shops in any Wisconsin county that will offer free cover-ups. Since starting the network last year, she said they've referred about a dozen people to shops around the state. 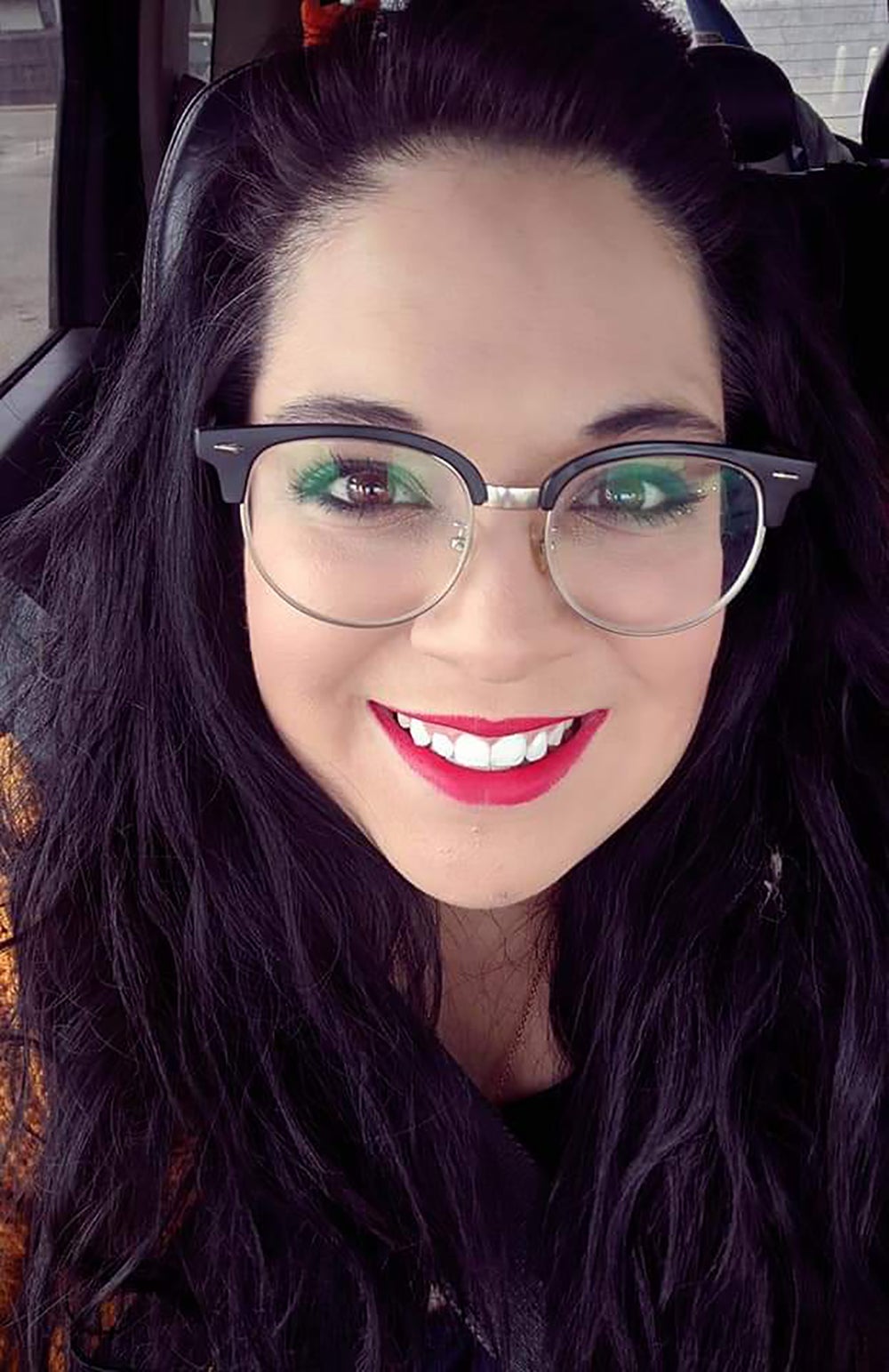 Morgan Burke, who works at  Monkey Wrench Tattoo Company, said he now realizes at least one instance where he gave a tattoo to a young woman that was likely a brand.

The husband and wife hope Tattoos for Triumph has helped others recognize the signs of branding.

While getting the word "faith" tattooed on her arm, Sheri Hopfensperger of Stevens Point said she didn’t think sex trafficking was an issue in central Wisconsin.

"It’s eye-opening when you hear just how prevalent it is in the area," Hopfensperger said. 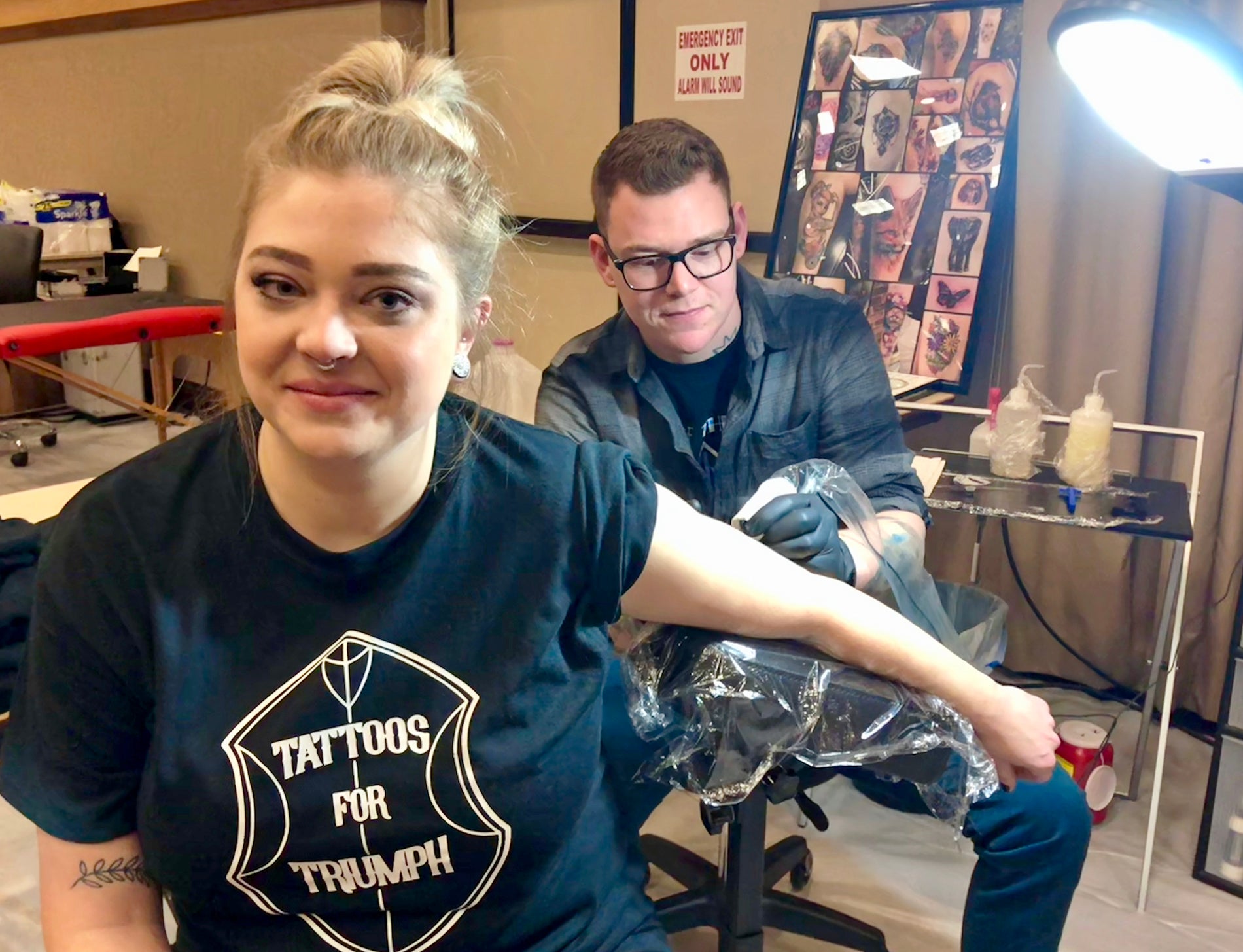 Brooke Felckowski, 28, of Stevens Point, Wis., gets a tattoo of a coffee cup from Jason Humphrey with Out of the Blue Tattoo in Marshfield as part of a fundraiser for survivors of sex trafficking. Danielle Kaeding/WPR

Her husband, Andy Hopfensperger, said he’s seen victims of branding and sex trafficking as a child and youth advocate for Portage County. He works with CAP Services Inc., a nonprofit that serves five counties.

"With being the center of the state, access to interstates and highways between like Minneapolis, Milwaukee, Chicago — it’s easy for people to traffic whether it’s drugs or people," he said.

DOJ officials agree major corridors and transportation hubs make it easier to move victims, but Young said it’s a problem that touches every county in Wisconsin. Although, she said the state is getting better at identifying it.

The number of commercial sex trafficking offenses recorded in Wisconsin nearly doubled from 34 in 2016 to 59 in 2017, according to the FBI’s uniform crime reports.

While state data is limited, the DOJ opened 63 new cases in the first year of its newly formed Human Trafficking Bureau, said Benjamin Poller, special agent in charge of the bureau within the state Division of Criminal Investigation.

"It’s just being recognized more in the northern counties because we start to get different complaints that come in about potential human trafficking that we look into," Poller said. "It also travels quite a bit. Even if there’s a human trafficking case we’re looking into in the Wausau area or further north, the case may not be investigated out of that area. It may be investigated out of another area because they move around so much."

Milwaukee, the state's largest city, has developed a reputation nationwide as a hot spot for sex trafficking.

Studies there have begun to illuminate the scope of the problem in southeastern Wisconsin.

A review of Milwaukee Police Department incident reports that was released in March found 340 people who were 25 years old or younger were confirmed or believed to be victims of sex trafficking. A supplemental report released in December found 85 of those youths had been reported missing 765 times while they were in out-of-home care.

However, state officials are quick to point out that available data doesn’t reflect investigations ongoing by individual police departments or cases that haven’t been reported.

Young said part of the problem is that sex trafficking is hidden in plain sight. But, if more people recognize the signs of exploitation, she hopes it'll make it more difficult for some men to justify buying sex.

Editor's note: A previous version of this story inaccurately referred to Morgan Burke as the owner of Monkey Wrench Tattoo Company. The story was updated Tuesday, Jan. 29, 2018, to show he is an employee of the shop.