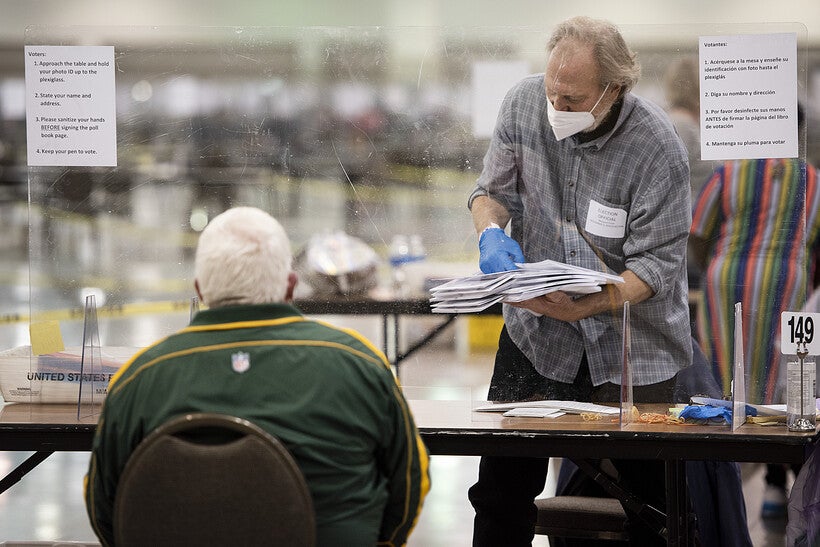 Candidates say razor-thin margins across the state emphasize how every vote counts in local races
By Diane Bezucha
Share:

When it was his turn, Walton drew a three. And just like that, his run was over.

But the two men weren’t in a casino. They were at City Hall, determining the outcome of the race for Sheboygan’s District 10 Common Council seat.

After all the ballots were counted — and recounted — Walton, the incumbent, and his opponent, Joseph Heidemann, had received 403 votes each. To break the tie, City Clerk Meredith DeBruin said, the city chose an impartial method that allowed both candidates to participate.

"We got a deck of cards that was sealed in the plastic, and we opened it at the Board of Canvassers, took out the Jokers (and) shuffled the cards," DeBruin said. "The candidates got to choose if they wanted the aces to be high or low. (We) fanned the cards out for them and they both drew a card and then the high card won."

And even though it didn’t turn out in Walton’s favor, he stands behind the results.

"I have no doubt that it was a fair process," Walton said.

Sheboygan was one of at least six municipalities across Wisconsin in which a tied race in the April 5 elections had to be broken with a game of chance.

According to state statute, when two or more candidates receive the same number of votes, the winner is chosen "by lot," or at random. But the state doesn’t dictate the method — that’s up to the Municipal Board of Canvassers.

In most cases, election officials choose between the deck of cards method, a coin toss or drawing names from a hat. If both candidates are present, they can participate.

Walton thinks there could be a better way, perhaps one that brings voters into the tie-breaking process. And he can’t help but wonder if a different method would have changed things for him.

Flipping a coin is one of the more common methods for breaking ties, despite research that shows a slight bias for the side that's facing up at the start of the toss. And even Google can do it for you.

Oneida County opted for the classic coin toss when the District 13 race for County Board of Supervisors came up deadlocked between Three Lakes residents Collette Sorgel and Brian Slizewski, with 177 votes apiece.

When Hartman flipped the coin, it came up heads and Sorgel was declared the winner.

"I kept thinking that the people of Three Lakes spoke, and they chose Brian and I equally," Sorgel said. "So I felt even if I didn't win, that we would be represented well."

Slizewski asked for a recount, which Hartman did by hand. Twice. Each time the results were the same.

"This is such a good sign that our democracy does work. Our polling does work. That the machines are counting the same as the manual counts," Sorgel said. "Even though it was a small subset of the entire race, it did show that the system is working."

The Village of Port Edwards also used a coin toss to break a tie between Caleb McGregor and Megan Duellman in the race for a seat on the Village Board when both candidates received 135 votes.

Like Oneida County, the first candidate on the ballot — Duellman — was assigned heads. When the chief election inspector flipped the coin, it came up tails and McGregor won.

Village Clerk Diane Tremmel said it was the first time she’s had to break a tie. And she stands behind the method.

"What else can you do besides another election?" Tremmel said.

Luck of the draw

On election night, Delafield Alder Phil Kasun was banking on celebrating his reelection. Instead, he wound up tied 172-172 with challenger Paul Price.

"Everybody was kind of dumbfounded. We just kept looking around, like, 'Well, what do we do? What do we do?' And what do you do? And nobody knew. We started making jokes about it," Kasun said. "Rock, paper, scissors seemed to be the thing of choice."

Instead, the city's Municipal Board of Canvassers chose to draw names from a box.

"It really shows how important everybody's vote is," Price said. "Sometimes there's a big landslide or something, but many times, especially in the smaller districts without a huge number of votes, your votes are critically important."

A Kenosha County supervisor race also came down to drawing a name from the basket when a recount left Zach Rodriguez and Alyssa Williams in a tie. Rodriguez, the incumbent, ultimately prevailed.

And the stakes can feel just as high for those charged with the task of picking the winner.

The Village of Kronenwetter chose to draw names when there was a tie between Timothy Shaw and Danielle Bergmann for a seat on the Village Board of Trustees.

Police Lt. Christopher Smart was selected as the impartial party to draw the name from the police union ballot box chosen for the occasion.

"I felt a little pressure as I walked in, you know, thinking, 'OK, it's gonna come down to this,'" Smart said. "I just quick grabbed the first one that I could feel and pull(ed) it out instead of wandering around in there very long."

Shaw was the lucky winner. Smart said he trusted the simplicity of the process.

"Somebody was going to lose and whichever one I drew was by fate for the citizens," he said.

'One vote makes a difference'

And while not technically a tie, the race for Wauwatosa’s District 5 Common Council seat came down to one vote. On election night, District 5 candidates Sean Lowe and Rob Gustafson were tied, but a provisional ballot opened on April 8 nudged Lowe ahead by a single vote.

When Gustafson called for a recount, the Board of Canvassers, poll workers and city staff spent 12 hours reviewing more than 10,000 ballots to arrive at the same conclusion.

Lowe will be the first Black man to serve on the Wauwatosa Common Council in its 125-year history, joining Margaret Arney, the council’s first Black woman, who was also recently elected.

While statewide data is not yet available, candidates say the razor-thin margins point to a politically divided climate leading to highly competitive races. This is especially true in local races where there are fewer voters.

Walton, a progressive candidate, said Sheboygan’s 10th District is one of the more conservative districts in the city and he was encouraged to see an even split.

"Even though it didn't go in my favor, it showed that if somebody focuses on the issues and tends to the needs of the district, then we can make this a competitive district," Walton said.

"Now I can say absolutely 100 percent: Every vote counts because one more vote either way, (my opponent) or I would have won," Sorgel said. "One vote makes a difference."