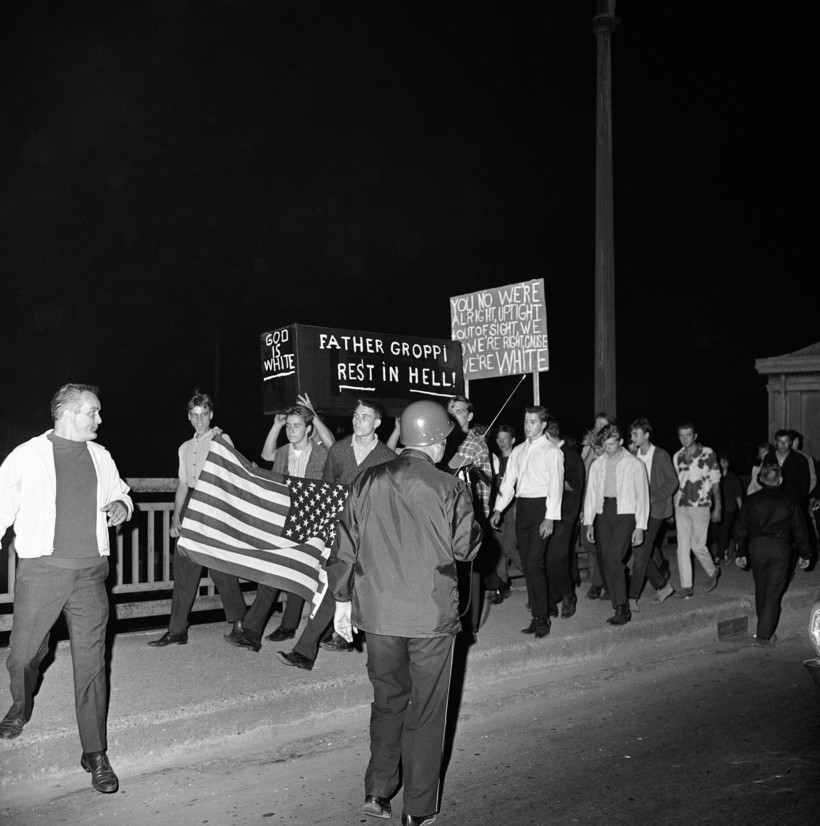 Milwaukee's South Side residents carry a simulated coffin as they march to North Side of city for rally at residence of Roman Catholic Archbishop William Cousins September 13, 1967. They are protesting activities of Father James Groppi, the white priest who has led Black open housing demonstrations the last 16 consecutive nights. AP Photo

In August 1967, the city of Milwaukee saw marches for a new law that would end discrimination for African-Americans seeking housing. While Milwaukee already had a fair housing law, many saw it as weak legislation that didn't cover all parts of the city.

According to Reggie Jackson, oral historian and head griot of America’s Black Holocaust Museum in Milwaukee, African-Americans had few options when it came to finding new homes to live in.

Alderwoman Vel Phillips had been pushing for a more effective law to end housing discrimination for years within the Milwaukee Common Council. She introduced the bill four times between 1962 and 1967 and each time it was introduced, Phillips' vote was the only one in favor of it and the rest of the council voted it down.

She eventually teamed up with the NAACP, organizing marches for open housing for 200 consecutive days.

"They began to work together to raise awareness of the issue to begin to protest at the homes of aldermen and to also get out in the streets and begin to plan marches," Jackson said, adding that the marches were met with counter-protesters, who, at times, were larger in number than those marching for the housing law.

In April 1968, Milwaukee's Common Council, which had seven newly-elected alderman, did pass an open housing law though it came after a period of deep unrest in Milwaukee and the rest of the country. Only weeks earlier, Martin Luther King Jr. was assassinated and Congress passed the Civil Rights Act of 1968.

It has been 50 years since the marches and promises of residential integration, but Milwaukee continues to find itself at the top of lists naming the country's most segregated metropolitan areas -- often in the company of cities like Detroit and Cleveland.

Jackson said the black-white divide is evident when one looks at the racial breakdown of Milwaukee County as a whole, where the majority of African-Americans live within Milwaukee's city limits and not in the suburbs.

"If you look at the 19 cities of Milwaukee County, there are only three outside the city of Milwaukee that have an African-American population above five percent," he said.

Jackson pointed to the legal system as partly responsible for the perennial problem of racial and economic segregation in Milwaukee. He mentioned zoning laws in suburban communities that prevented the development of low-income housing and said that while there is an open housing law, "it’s not strongly enforced."

But Jackson also looked beyond laws and said one of the most important things people can do is to take steps on their own to create more integrated communities.