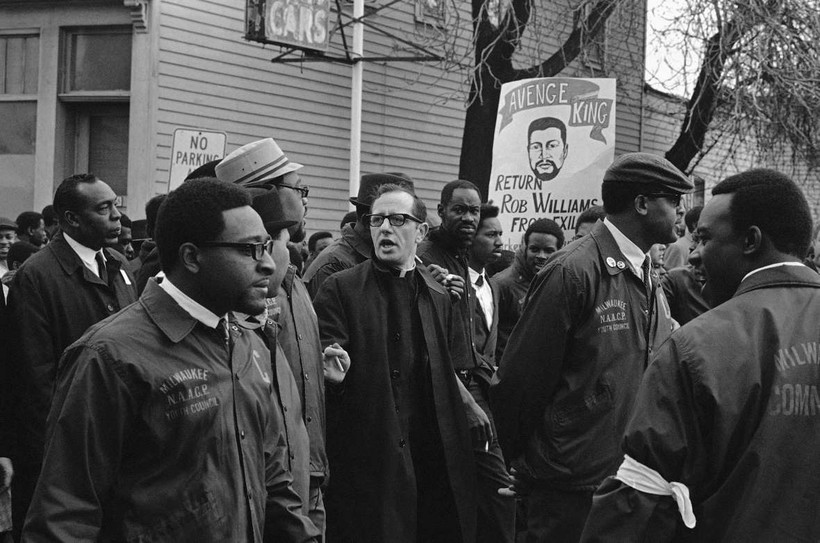 The Rev. James E. Groppi, adviser to the NAACP's Milwaukee Youth Council, is surrounded by units commandos as he leads procession through Milwaukee's near-North Side, April 8, 1968. Demonstrators eventually numbered some 15,000 and marched through downtown business district in memorial to the late Dr. Martin Luther King Jr. Paul Shane/AP Photo

Until the late 1960s, discriminatory laws and lending practices confined African-Americans in Milwaukee to a single neighborhood. Those restrictions sparked marches in the city that spanned 200 consecutive days.

Fifty years later, activists say there is still a long way to go.

"Overall, 50 years ago, Milwaukee was one of the most segregated cities in the country, today it remains that way," said Prentice McKinney, a prominent member of the NAACP Youth Council Commandos during the Milwaukee fair housing marches of 1967-1968.

Nearly all of Milwaukee’s subdivisions were planned with covenants that banned the sale of property to people of color, according to the Wisconsin Historical Society.

Lenders and landlords worked within informal agreements to carry out the discriminatory practices until the federal Fair Housing Act was passed in 1968 — in large part because of the fair housing marches in Milwaukee.

When he was a young man, his older brother wanted to buy a house for their mother when he was home on leave from the military. When they went to tour a home on the south side, the white woman selling said, "Oh my God, we couldn’t sell to black people, our neighbors would be upset with us," McKinney recalled. But the woman didn’t use the term black people.

"I had two brothers in the service, but my mother could not buy a house where she wanted to live because she was black," he said.

It would take six more years, three more failed attempts, and almost a year of marches before the bill was passed. The federal legislation was approved just one week after the assassination of Dr. Martin Luther King, Jr. Shortly after that, the Milwaukee Common Council passed a fair housing bill that was stronger than the federal law.

The first march took place Aug. 28, 1967. The Milwaukee NAACP Youth Council, their advisor the Rev. James Groppi and members of the public marched from the city’s black north side across the 16th Street Viaduct to the white south side.

The Rev. James Groppi, center, and the NAACP participate in a civil rights march. Police are armed and escorting the protestors. Photo courtesy the Wisconsin Historical Society

The group of more than 200 people was met by 5,000 counter protestors the first night. On the second night, 13,000 counter protesters showed up with rocks, bottles and racial epitaphs, said Kristen Leffelman, field services representative at the Wisconsin Historical Society and contributor to a traveling exhibit on the fair housing marches.

The marchers returned to find their headquarters, the Freedom House, on fire.

"Any incident that would happen to us would actually inflame more people because they felt it just wasn’t right that we couldn’t even march across the bridge, let alone not be able to live anywhere but in the segregated slums of the city," he said. Protesters at a rally for fair housing. One man is holding a sign that reads: "We Demand Fair Housing Now," while others behind him are using a bullhorn. Photo courtesy the Wisconsin Historical Society

"When most of us learn about the civil rights movement, we learn about it as a southern movement … but the movement didn’t stop there," she said. "In Milwaukee we have a third, really important piece of that puzzle that changed the national landscape."

The act prohibits discrimination concerning the sale, rental and financing of housing based on race, religion, national origin or gender.

"Of course, sometimes it’s easier to change laws than it is to change minds," Leffelman said. "So, as neighborhoods in Milwaukee opened up to African-Americans in our case, we saw thousands of white residents leaving the city, which really perpetuated the problem of segregation even after it was illegal."

This year, Milwaukee is celebrating the significance of the marches, and using the platform to inspire the next generation of activists to take a stand against injustice.

"In a lot of ways, what we see in our contemporary moment is almost a spooky reflection of the conditions that led to the fair housing marches 50 years ago," said Adam Carr, an organizer of 200 Nights of Freedom, an initiative to commemorate the marches.

Since the initiative kicked off in August 2017, more than 100 events have taken place around the city tackling contemporary issues like black male incarceration, economic disparity and youth disenfranchisement.

"As we had issues 50 years ago, today there are similar issues … in order to bring about change, people must become involved, or evil will always prevail," McKinney said.

Editor's note: This story has been corrected to reflect that the fair housing laws were passed after the assassination of Dr. Martin Luther King Jr., not before.