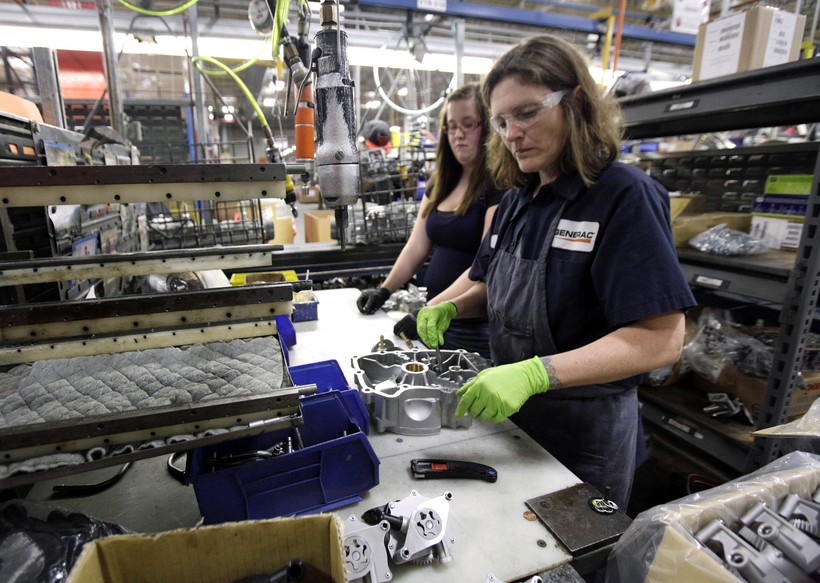 In this 2012 file photo, Suzie Warner works on an assembly line at Generac Power Systems, Inc., one of the largest makers of residential generators in the country, in Whitewater, Wisconsin. The Wisconsin Economic Development Corporation released a report yesterday detailing how the pandemic has affected the economy, businesses and workers. Nam Y. Huh/ AP Photo

50 percent of Wisconsin's working women are considering leaving their jobs, according to new report

Half of Wisconsin’s working women are considering quitting their current jobs, according to new research released Thursday by Milwaukee-based Kane Communications Group.

The number of dissatisfied working women in Wisconsin is at 60 percent for those working in retail, food service and hospitality industries, the research indicates.

This is a contrast from McKinsey & Company’s national 2021 Women in the Workplace report that found 40 percent of working women are considering leaving their jobs.

Kimberly Kane, president and CEO of Kane Communications Group, said the Wisconsin findings show employers in the state have a lot of work to do to develop workplaces where women feel valued and connected.

"When women come to work, they come fully to work," Kane said. "The women I have come to know in the workforce are team players, and they have high expectations, but they also have very full lives. Some are mothers, some are caring for elderly parents. They have another job when they get home."

Kane said one of the reasons she started her own company in 2013 was because her son was diagnosed with a mental illness, and her employers didn’t understand she needed to spend time with him.

"I think employers need to recognize that for decades, women have felt undervalued in the workplace," Kane said. "The difference today is the pandemic redefined the workplace for everyone, and women have a chance to work from home. Some lost their jobs, and many today are saying they don’t want to go back into the traditional work environment."

Some of the findings in the study show:

Julie Granger is the executive vice president of the Metro Milwaukee Association of Commerce, which represents more than 1,800 businesses in southeastern Wisconsin. She said it's more important than ever for Wisconsin businesses to tap the skills of women.

Granger said employers who have been paying attention to the needs of their employees should not be surprised by this data. And it doesn't take money to improve a workplace, she said.

"This is something that is really simple when it boils down to it: It's about a change in approach to attitude," Granger said. "I think everyone wants to feel like they are contributing to something bigger than themselves through their work, and recognition and support can go a long way to accomplishing that."

The analysis of working women in Wisconsin was developed by Kane Communications Group and conducted via a telephone and text messaging survey by Milwaukee-based Santiago Global Consulting, who collected and analyzed data from a random sample of 980 Wisconsin working women.

Kane Communications Group also held several listening sessions with more than two dozen Wisconsin working women to get their input on what employers can do to address the issues revealed in the research.

Kimberley Kane said she plans to conduct the research again in the next 18 to 24 months to see if Wisconsin businesses have made changes.

"One thing that employers need to recognize is having women in the workforce is critical for the economy," Kane said. "So, when we talk about what’s best for business, we have to talk about women. Women drive the economy, and without working women, we all lose."