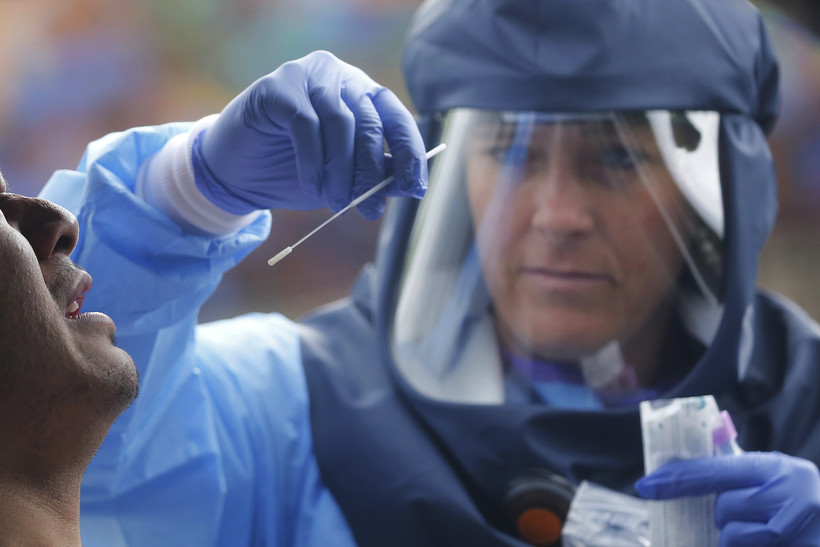 Cases Include Employees Living In 'Migrant Housing Camps' With Outbreak Accounting For 60 Percent Of All Positives In County
By Rich Kremer
Share:

A COVID-19 outbreak at a Seneca Foods vegetable processing plant in Barron County has infected 44 percent of the entire workforce. The outbreak also accounts for more than half of all COVID-19 cases in the county.

The Barron County Department of Health reported an initial outbreak at the Seneca Foods processing plant in the city of Cumberland July 29 that contributed to a 162 percent increase in the number of positive cases of COVID-19 in the county.

On Thursday, the health department issued another press release stating a mass testing event coordinated by the department, Wisconsin Department of Health Services, Wisconsin National Guard and Family Health La Clinica showed the outbreak continued to spread and by the end of July 44 percent of the entire workforce had tested positive.

Laura Sauve, Barron County health officer, told investigators with the Centers for Disease Control and DHS indicated the Seneca outbreak was "probably one of the most explosive situations that they had seen."

"This disease spreads so easily and many of the workers are migrant workers," said Sauve. "So they're living in migrant housing camps, which means they share bedrooms, they share bathrooms and kitchen facilities and living facilities and as well as working together."

Sauve said the mass testing event at Seneca took place on July 27. Wisconsin National Guard members offered testing for asymptomatic workers while health officials tested those who were symptomatic. She said they found that even symptomatic employees showed up for shifts.

"Although Seneca Foods guarantees them pay for 40 hours a week, even if they're out on isolation or sick, they still want to be earning the overtime pay," Sauve said. "Those with the classic symptoms of a high fever, cough, body aches, things like that, we were finding were staying out. But those with some mild symptoms that might be explained by something else, they were continuing to go to work. They're hard-working people."

In an email to WPR, Friday, Sauve said her department suggested the possibility of closing the processing facility because of the outbreak.

"We did discuss this both with Seneca and DHS/State, because they are food production and considered essential, this option was not pursued," said Sauve.

A phone call and email to Seneca Foods asking about the outbreak in Barron County weren't returned. A DHS spokesperson said the agency doesn't comment on active investigations. A CDC spokeswoman requested WPR send an interview request via email but it wasn't returned as of Friday afternoon.

Juan Trevino, of Texas, recently quit his job at Seneca Foods over the outbreak and frustration that the company didn't provide the amount of work it had originally promised. He said he and a brother-in-law went to Wisconsin in hopes of working 80 hours per week and around $1,200 a week.

Trevino said all workers in the group he was part of had to get tested for COVID-19 before they could start. Because of delays, he and others didn't begin working for a month. He said they were paid but there was no overtime.

"So, then when people started quitting, they started bringing in a brand new batch from Texas," said Trevino. "But we ended up finding out that they weren't testing them."

Trevino said a rumor started going around the Seneca plant that one of the newer workers had the virus and was "coughing a lung out."

"So I'm like, I cannot afford to get sick," Trevino said. "And then get my family sick."

Trevino said he never tested positive, but his brother-in-law did and was fired by Seneca. He said the outbreak could have been prevented if the company had tested everyone before they started.

Not all recent positive COVID-19 cases in Barron County were from the Seneca Foods facility. The county health department reported around 40 percent were from individuals in other cities who had contracted the virus after being in contact with groups of people. The health department warned residents via Facebook on August 13 that patrons at six bars and resorts had likely had exposure to COVID-19.

But Sauve said the overall COVID-19 trajectory is decreasing in the county, though cases are still popping up, related to Seneca Foods.

Minnesota health officials have reported an outbreak at another Seneca Foods facility in Glencoe, Minnesota.

Patrick Cudahay/Smithfield Foods in Cudahay had an outbreak of 85 positive cases in late April according to the DHS. As a result, the company has announced plans to build a larger, permanent break room to allow for social distancing.

According to DHS, there have been 787 investigations at non-health related workplaces, not including Seneca Foods.

Lisa Kilawee, the director of strategic, community engagement at Family Health La Clinica, which provides healthcare to seasonal and migrant workers at vegetable farms and canning facilities. She said when COVID-19 came to Wisconsin they shifted into providing assistance to employers about how to keep outbreaks from happening at workplaces housing.

"Ideally, the best case scenario is that we go out and do a worksite and in living arrangement review," said Kilawee. "And then we'll make recommendations, and we have a whole checklist. And it's on our website of things that we look for with the migrant, seasonal Ag worker employers."

She said the organization does not work with meatpacking plants as most workers at those facilities are not seasonal. She said farm and canning plant owners have worked well with her group and the numbers of seasonal and migrant workers testing positive for COVID-19 at facilities they assist have been low.

Rod Ritcherson, a spokesman for the national nonprofit, United Migrant Opportunity Services, which is based in Milwaukee. He said they have provided more than 50,000 face masks to farm workers.

Ritcherson said UMOS usually travels to farm and processing plant workers but because of the outbreak at Seneca Foods the group has not traveled to Cumberland due to staff safety concerns.

"Recently, however, we did contact the HR department at Sinica to see if we could be of assistance to find out if they need additional supplies like face masks, gloves and hand sanitizers," said Ritcherson. "And they relate to us that they had adequate supplies."

Ritcherson said UMOS is now offering $1,000 in cash assistance to migrant farmworkers and others like Juan Trevino who were impacted by COVID-19.