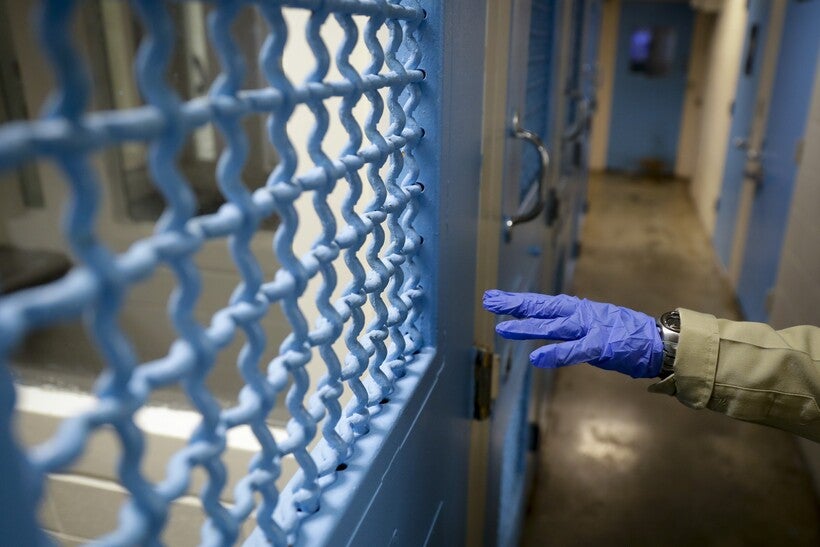 In this April 16, 2020, photo a gloved hand points to a holding cell at the hospital ward of the Twin Towers jail in Los Angeles. Across the country first responders who've fallen ill from COVID-19, recovered have begun the harrowing experience of returning to jobs that put them back on the front lines of America's fight against the novel coronavirus. Chris Carlson/AP Photo

Thirty-two inmates have tested positive for COVID-19 after exposure to an inmate who used fever-reducing drugs to conceal his symptoms, according to a release from the Dane County Sheriff’s Office.

A total of 37 inmates at the jail have tested positive since the facility's first confirmed case on March 26. Of those, six have recovered, six were released from custody and the remaining 25 are in medical isolation. Thirty-four more inmates are in quarantine and being monitored after being exposed to someone who had tested positive.

Larry Dupuis, legal director of the American Civil Liberties Union of Wisconsin, said the incident is an indication that Wisconsin needs to expand its testing in jails and prisons.

"This is probably the rare example of someone actually actively hiding their symptoms, but we all know that people are capable of spreading the disease when they’re asymptomatic," he said.

Elise Schaffer, the sheriff's public information officer, said newly arrested inmates, inmate workers and those in medical isolation and quarantine have their temperature checked twice a day, at minimum. All housing units now have infrared thermometers, as well, so inmates who request a temperature check can get one.

Dupuis and his organization have been pushing for jails and prisons around the state to release as many inmates as possible, so those who remain can maintain better social distance.

"What you’ve got is a setup not dissimilar to nursing homes, except that jails and prisons are not health care providers," he said. "You’ve got a situation where the people are next to each other all the time, they’re in close quarters, and it’s inevitable that you’re going to have spread."

He noted that, as in nursing homes, many inmates at jails and prisons have underlying risk factors that make them especially vulnerable to the disease.

Schaffer said the department has already nearly halved its jail population, and doesn't currently plan to release any additional inmates unless their already-scheduled release date arrives.

"The sheriff has been working all along on reducing the inmate population, which he's done drastically," she said.

Schaffer said the jail's population has gone from nearly 800 inmates before the pandemic to the low 400s.

All inmates are screened when they enter the jail, and new arrivals are quarantined away from the general population for their first two weeks on the first floor of Dane County's public safety building. Of the other inmates who tested positive, Schaffer said some are together in a pod of positive cases, while others are put into segregation pods by themselves if they need a higher level of security.

The sheriff’s department said no inmates have required hospitalization for the disease, and the majority of positive cases have had mild or no symptoms.