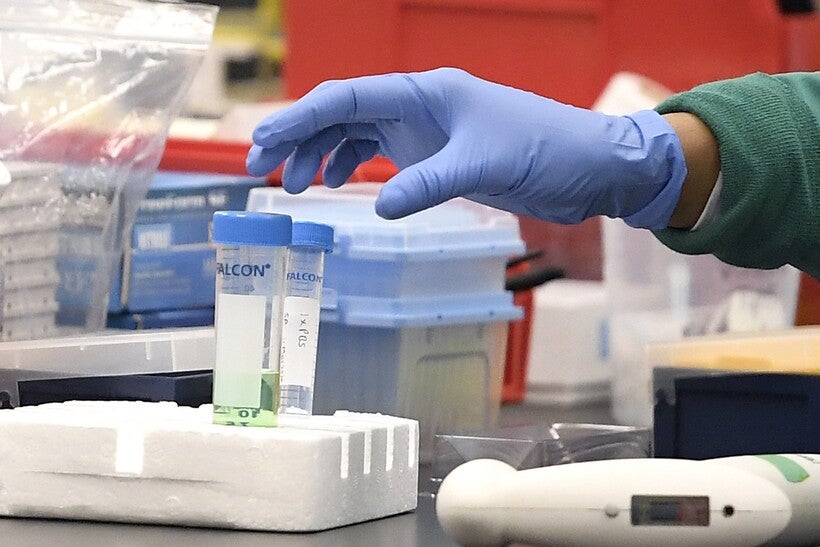 A researcher at Protein Sciences reaches for a vial in a lab, Thursday, March 12, 2020, in Meriden, Conn. The biotech company is currently researching a vaccine for COVID-19. For most people, the new coronavirus causes only mild or moderate symptoms, such as fever and cough. For some, especially older adults and people with existing health problems, it can cause more severe illness, including pneumonia. The vast majority of people recover from the new virus. Jessica Hill/AP Photo

3 In Wisconsin Die From COVID-19

Three men have died in Wisconsin from COVID-19, the first to be reported in the state.

The third death, a 66-year-old Milwaukee man, was announced Friday morning by the Milwaukee County Medical Examiner's Office. The man had been hospitalized since March 16. The office reported that it doesn't know how he contracted the virus.

"Our hearts go out to all the loved ones affected by these deaths, and to all those suffering from this virus," Evers said in the statement. "We are committed to fighting the spread of COVID-19 in Wisconsin and I want to recognize the hard work and bravery of our nurses, doctors, state health officials, and all those on the front lines in the effort to save lives. Together we will get through this historic health challenge."

The news of the first two deaths comes the same day that the state saw nearly 50 additional cases of the new coronavirus confirmed. The state Department of Health Services reported 155 people have tested positive in 21 counties.

The 155 figure didn't include two new cases in La Crosse County and the first case in Rock County announced Thursday evening by the county, bringing the total to at least 158.

As of 1:50 p.m. Thursday, the number of confirmed cases by county, according to DHS, is:

DHS has identified community spread of the virus in Brown, Dane, Kenosha and Milwaukee counties, meaning some people who have been infected with the virus aren't sure how or where they became infected.