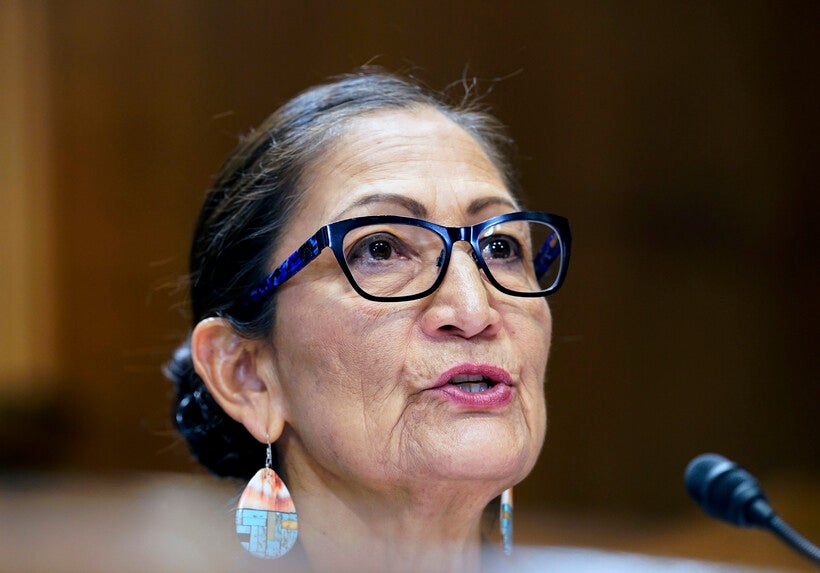 Interior Secretary Deb Haaland, speaks during a Senate Energy and Natural Resources Committee hearing on the budget request for fiscal year 2023 for the Department of the Interior, Thursday, May 19, 2022, on Capitol Hill in Washington. Mariam Zuhaib/AP Photo

The US Department of Interior has replaced the names of 28 lakes, streams, valleys and other geographic features in Wisconsin
By Gaby Vinick
Share:

The U.S. Department of the Interior released the new names of nearly 650 sites nationwide to remove a derogatory slur for Indigenous women from federal use. These include 28 lakes, valleys and other geographic features in Wisconsin — a change many believe is long overdue.

"I thought, 'It's about time,'" said Bobbi Webster, public relations director for the Oneida Nation. "And I thought it takes (a) Native or an Indigenous woman to make that move to really push it when she's in a position of the authority to do that," referring to Interior Secretary Deb Haaland.

The word, which originated as an Algonquin term for "woman," has evolved into a racist and sexist slur. The Board on Geographic Names, a federal body founded in 1890, voted on the final replacement names last Thursday.

Webster applauded the change but said it will take time and resources for people to start using the new names.

"I don't think there's going to be much of a change immediately, but in terms of looking to the future, I would hope that we begin to raise a new generation of people — citizens in Wisconsin — that care more deeply about one another," she said.

Webster continued: "Mutual respect is something that we really have to lay as a foundation in the state in our school system as well as in our home socially and educationally."

Like Webster, Kris Goodwill of the Menominee Indian Tribe of Wisconsin commended the change.

"I was very happy about it," Goodwill, who is a tribal liaison for the Wisconsin Department of Natural Resources, said. "They are permanent changes with the federal government publishing this list."

But Goodwill said it will take time to change signage.

"It won't happen overnight. But the example that happened in the past is when the s-word lake in Oneida County was changed to Amber Lake. And then eventually the roads around the lake were changed," she said.

That push to rename Amber Lake in Vilas and Oneida counties was extensive. John D. Johnson Sr., president of the Lac du Flambeau band of Lake Superior Chippewa, was one of the people campaigning for change.

"We love our people, we take care of our people here, and we respect our women a lot. And this is why we push for (those) name changes because of the respect that we have for women," he said.

With the changes, Johnson Sr. hopes to expand tribal education in Wisconsin.

"The public should know a little bit more about our history, Wisconsin, the native tribes here, and also our treaty rights," he said. "We ceded a lot of territory to the federal government in order for us to have these reservations."

This isn’t the first time the federal government has removed derogatory terms from federal use. The Interior Department also identified and renamed pejorative terms for African Americans in 1962 and Japanese people in 1974.

In order to continue the conversation surrounding site names, Haaland created a federal advisory committee to hear public input on other derogatory names still being used.