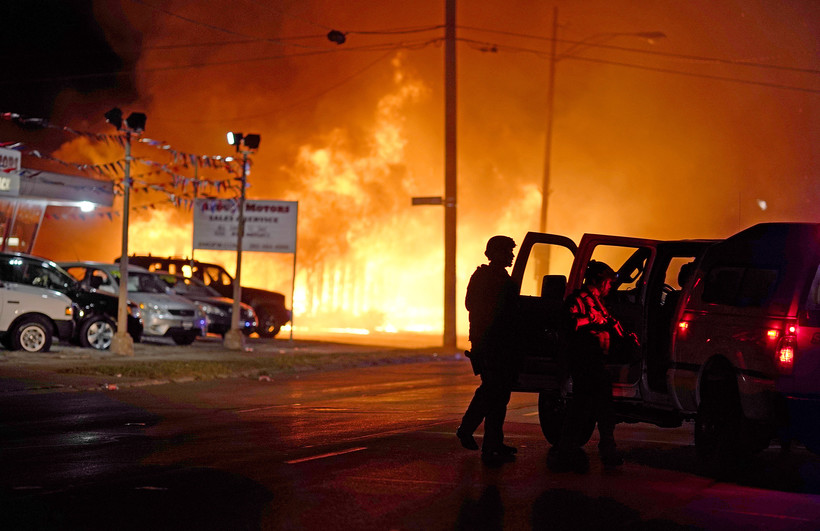 Police try to secure businesses after protesters set fire to an office in the background late Monday, Aug. 24, 2020, in Kenosha, Wis. Protesters converged on the county courthouse during a second night of clashes after the police shooting of Jacob Blake a day earlier turned Kenosha into the nation's latest flashpoint city in a summer of racial unrest. (AP Photo/David Goldman)

Federal prosecutors have charged two Minnesota men with crimes relating to arson and looting that took place during unrest in Kenosha in the summer of 2020.

Anthony Clay, 24, and Antoine Eubanks, 30, were charged in April with conspiracy to commit offenses against the United States. The complaint was unsealed when they were indicted on Tuesday.

The complaint describes alleged arson and looting that took place the night of Aug. 24 into the early morning hours of Aug. 25 at three businesses in Kenosha: Charlie’s 10th Hole Bar, a CVS store, and a Citgo gas station.

Social media records obtained by law enforcement show the men traveling with others from Minnesota to Wisconsin.

Law enforcement also obtained records from Facebook accounts maintained by both Clay and Eubanks, as well as several others. The records, including photos, show boxes of cigarettes and cigars, along with offers to sell them.

Clay’s social media records include photos of pills and messages in which he offers to sell pills and marijuana, and videos that show him traveling towards Milwaukee, the complaint said.

The complaint also details the actions of three other Minnesota men: Allen King, David Garner, and Kevin Martinez, who were charged last year in relation to the arson and burglary. Garner, who was arrested in August of last year, told law enforcement that Clay took the drugs from the pharmacy, the complaint said.

Another person, identified in the complaint as "K.S.," told law enforcement that Eubanks and two others shared the profits from the stolen items.

The unrest in Kenosha began after Jacob Blake, a black man, was shot by a Kenosha Police officer Rusten Shesky on Aug. 23, 2020. On Aug. 25, Illinois teenager Kyle Rittenhouse shot three people, killing two. Last fall, a jury acquitted him of all charges.