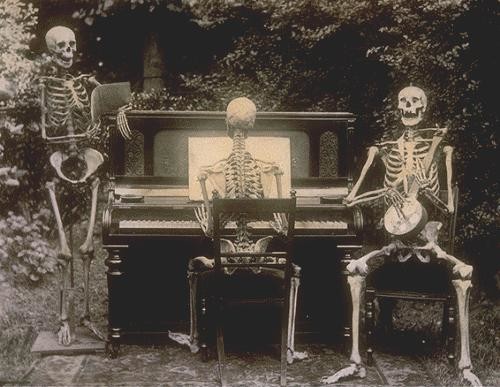 It’s the time of year when leaves are falling, nights are getting longer and Halloween is just around the corner. Whether or not you are playing ghosts in the graveyard or going to a haunted house, this is certainly a spooky time of year. Costumes, decorations and candy are not a celebration without a frightening playlist. From silly to bone-chilling, this compilation is great for pumpkin carving, parties, costume making or any time you want to get in the Halloween spirit. Boo!

An excerpt from Tchaikovsky’s "Swan Lake" was used as the theme song for the 1931 Bela Lugosi film "Dracula." This piece was the only music used in the original film, leaving the rest in a haunting silence.

Flash forward to today and we are still watching the 1931 version of "Dracula" but with a musical twist. Philip Glass composed an entire soundtrack for the very same "Dracula" film. Here is an excerpt from a live performance.

Huldrefolk are the subject of much of Norwegian folklore. These attractive creatures — similar to nymphs — have the power to become invisible and use their beauty to trick humans. This eerie song, sung by Magnhild Gundersen and Eivind Bjorke, is about an interaction between a boy and a huldra titled, "Guten og huldra" or "The Boy and the Nymph."

The tone poem "Danse Macabre" by Camille Saint-Saëns musically tells the story of Death appearing at the stroke of midnight on Halloween. Death plays music while the dead arise from their graves and dance until the rooster crows at dawn and they must return to the ground for another year.

This song details the interaction between a man and the devil. Enjoy "The Ballad of Jack O' the Lantern" by The Muses.

Another interaction with the devil inspired the "Devil’s Trill Sonata." Legend has it that Giuseppe Tartini was visited by the devil in a dream. This piece is supposedly the result of Tartini teaching the devil to play violin.

This song is based on a Scottish ballad in which a woman rescues her true love Tam Lin from the Queen of the Fairies. Tam Lin is in danger of being sent to hell as a sacrifice on Halloween. Enjoy the Fairpoint Convention’s version of "Tam Lin."

"Le Dragon de Chimay" by Tromper le Temps is another story of entrapment. This song tells of a tortured witch who curses the princess’s love and buries him alive. As fire raged in his heart for anger at the witch and sorrow for losing his true love, he turned into a dragon. The song ends triumphantly as the beast emerges from his grave and upon seeing the princess who always loved him, the curse was broken.

Mussorgsky’s "Catacombs" is a blood curdling movement from the suite "Pictures at an Exhibition." Think echoing tunnels and skulls glowing in candlelight.

This piece is sure to chill you to the bone. Bach’s "Toccata and Fugue in D Minor" conjures thoughts of vampires, demons and other spooky creatures.

Another truly haunting piece is the third movement of Béla Bartók’s "Music for Strings, Percussion and Celesta." As a listener, you may gain a strong mysterious and foreboding feeling. The hair-raising piece can be recognized for its use in the ever popular 1980 horror film "The Shining."

No Halloween playlist is safe from one of the creepiest pieces of all time, Mussorgsky’s "Night on Bald Mountain." Beware, this piece is a musical depiction of a witch’s sabbath and may leave you with nightmares.

As a treat for getting through that last few terrifying pieces, here is something to laugh with. Enjoy Andrew Gold’s "Spooky Scary Skeletons" cleverly accompanying the 1929 Disney cartoon "The Skeleton Dance."