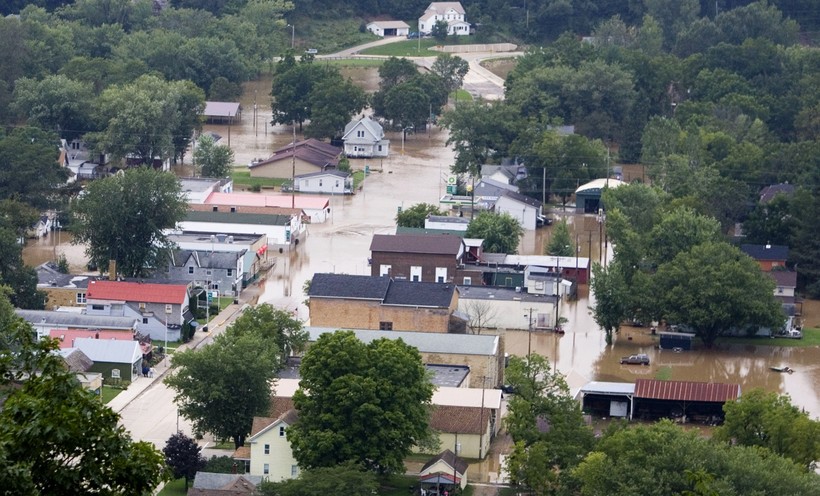 In a Monday, Aug. 20, 2007 file photo, flood waters inundate Gays Mills, Wisconsin, after a storm dumped rain in the Kickapoo Valley. Twice in 10 months driving rainstorms sent the Kickapoo River rushing over its banks, drowning the town in butterscotch-colored slime. Each time, scores of residents fled.

Ten years after an historic flood, communities in Wisconsin continue to deal with increasing storms and flash floods.

In August 2007, flooding caused more than $200 million dollars in damage across western Wisconsin and southeastern Minnesota.

The village of Gays Mills was significantly impacted by the flooding, which took out much of the village’s downtown area. After another major flood hit again in 2008, the village received federal funding to buy out around 50 homes and businesses in the floodplain in order to move them to a new part of town.

While the move is much safer for residents, it came at a cost for the community.

"It's hurt some of the downtown business drastically," said Gays Mills Mayor Harry Heisz. "We lost about a third of the population because some of them just said, 'I'm done, I'm moving somewhere else.'"

Heisz said it’s also had a significant financial impact on the community, with more roads and empty lots for the city to maintain.

But focusing on mitigation is a good strategy for communities experiencing recent flash floods, because they’re likely to continue, said Steve Vavrus, senior scientist for the University of Wisconsin-Madison’s Nelson Institute Center for Climatic Research.

"One of the changes that the climate models are very consistent about is that we'll see more frequent and more intense heavy rainfalls, and so we have reason to believe that what we've seen so far is a harbinger of the future," Vavrus said.

Vavrus said Wisconsin has seen a noticeable uptick in the number of flooding events in the last 10 years. And as climate change continues to happen, Vavrus said more warm air in the atmosphere will bring more instances of heavy rainfall.

"We've basically had a preview of what's likely to happen more often and any communities that have already been hit by flooding recently have a pretty good idea in terms of emergency management where their vulnerabilities are," Vavrus said.

Some local emergency management officials are responding to the potential increase in storms.

"Improve the areas that are affected so they won't be affected in a future flood," said Crawford County Emergency Management Director Jim Hackett. "That way if you see the flooding happening more frequently, it's going to affect less things because we are mitigating the damage that would be there."

Hackett said individuals also need to take steps to prevent flood damage to their homes, like hiring a reputable contractor when building on a hill or near a waterway and waterproofing basements.