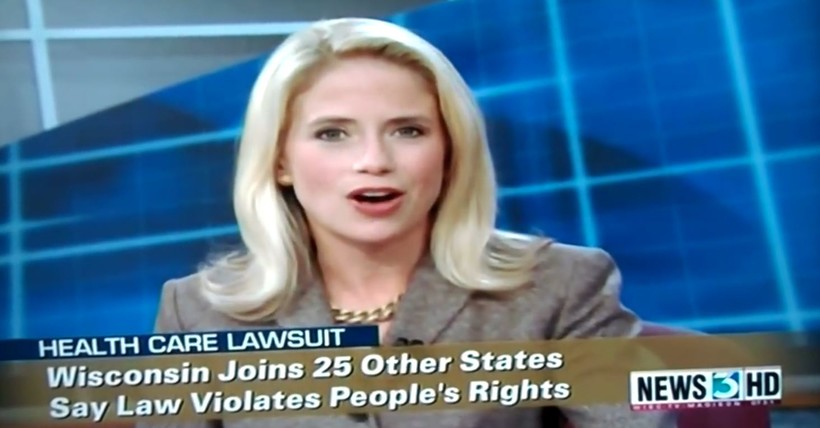 Sarah Carlson was a news anchor with WISC-TV in Madison when she suffered a seizure on-air in 2011. Courtesy of Sarah Carlson

Sarah Carlson says stigma is one reason seizure disorders are not understood
By Rob Mentzer
Share:

Sarah Carlson felt a seizure coming on as she started to read the news story.

In 2011, she was an anchor on Madison's WISC-TV. She had been diagnosed with epilepsy four years earlier, and had had a brain tumor removed. But the tumor left behind scar tissue, and that scar tissue was still capable of causing her seizures.

"My seizures were not under control," said Carlson, now 46. "I was taking my chances."

Sometimes, she said, her seizures caused her to get confused or sit down on the floor. That night, as she read a story on-air during the evening news, it affected her speech. Her cadence was relatively normal. But she was experiencing what doctors call "neologistic paraphasia" and was speaking nonsense syllables instead of words.

"I don't think I knew I was speaking gibberish or having a seizure until it was over," Carlson said. Her reaction afterward: "Oh no. This has happened again."

Video of her strange speech spread online. It was covered respectfully in local media, but on social media, people mocked her or even used the video clip to promote conspiracy theories about "microwave weaponry" and "mind control."

The years that followed were difficult for Carlson. Her disorder got worse, and she moved to Illinois to be closer to her parents. She lost her driver's license due to her seizure risk, and she couldn't find another job in broadcast news. Prospective employers didn't say it was because of her epilepsy, but she suspects the stigma around the disorder was a factor.

But about 18 months ago, she said, she found a medication that eliminated her seizures. She says she feels like she's in a new chapter of her life. And she speaks publicly about her own experience to try to help others better understand epilepsy and find the help they need.

Medically, epilepsy is any brain disorder that repeatedly causes seizures. But seizures themselves can take many different forms, from a loss of consciousness and muscle control to something that would look to an outsider like a brief period of confusion.

Carlson's on-air seizure was of a different, more serious type than she had experienced before, and it was a sign that her symptoms were worsening. She would end up trying about a dozen different medications, she said. Some didn't work; some had bad side effects; and some actually made her seizures worse.

"Our goals for epilepsy treatment are no seizures, none," said Dr. Michael C. Smith, director of the neurology department at Chicago’s Rush Medical College and Carlson's doctor. "No side effects from medication, and allowing the person to have a full and normal life. We don't always get to those goals, but we shouldn't give up those goals."

It's not always possible to find a medication that eliminates seizures, Smith said. But it was for Carlson, after more than a decade of exhausting treatment. One thing she hopes her story does is encourage patients to continue to try. An annual epilepsy awareness event called Purple Day is on Saturday, and she hopes the observance helps people better understand the disorder.

Carlson recently moved back to Madison, where she is raising her teenage son and daughter. She says her disability kept her from working for most of the last decade, and she considers finding the right job one next step in her recovery.

After five years without driving, last year Carlson got her license back. To her, it was a concrete sign of how far she had come.

"I started driving last summer," she said. "Honest to God, I get excited when I get in my car, like a teenager."