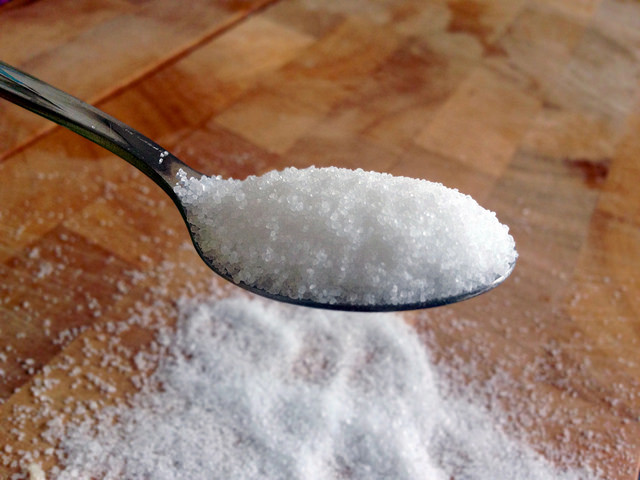 Zorba Paster: The Scoop On Sugar

It's hard to avoid the health headlines that scream out to you. The latest: Sugar contributes to heart disease and researchers kept it from us.

A recent study published in the Journal of the American Medical Association showed how the sugar industry had a hand in playing down sugar as a cause of heart disease, allowing the saturated fat studies to come to the forefront. They cheered on the slogan – fat is bad, sugar is OK. Now, I ask you, who really thought sugar was OK?

Actually, my dad did. He was in the gumball business working for my Uncle Art.

I have fond memories of him taking me to the candy show in McCormick Place in Chicago. At the time, it was the largest candy show in the world.

Talk about a happy place. There were acres and acres of shiny confections filled with happy smiling people tending them. It was the exact opposite of the Mayo Clinic conference I went to a few years ago on depression and anxiety. You get my drift.

My dad used to give me all of the propaganda. He showed me "real" scientific studies showing sugar was good for you, gave you energy, that it was — I kid you not — brain food. But do you think as a 19-year-old I believed this bunk? Of course not.

That's why I find it hard to believe studies 50 years ago have swayed investigators since then. I do think it probably had an immediate effect and for many years the "fat is so bad that we have to wipe every last drop of it out" view was popular. That was until researchers around the Mediterranean Sea showed some fat, such as fish fat, is good, and other fat, such as meat and sausage fat, is bad. And, by the way, there are minimal candies and pastries in the Mediterranean diet. For dessert, it's usually fruit or a small, not Wisconsin-size, pastry.

I do believe, though, the research allowed the industrial food manufacturers to go behind the curtain for a while and produce such notables as Snack Wells – a low fat, super sweet cookie you could supposedly eat with impunity. But after we all gained a few extra pounds, did we really think sugar was OK for us to eat? Even though we all know sugar and diabetes go hand in hand.

After all, the common name for diabetes used to be sugar diabetes.

So, while I think the sugar industry’s research support may have influenced early studies, I don't think this influence lasted for 50 years.

Things are not perfect today but they are more transparent. Back in 1967, you didn't have to sign an informed consent before you had surgery. Your doctor could give you an experimental drug without your permission because permission wasn't needed. And clinical research on pharmaceuticals was not nearly as rigorous. It's important funding for research be stated in research papers, as it has for more than a decade. That helps us remove much undue influence on science.

My spin: Science isn't perfect. There are always conflicts in science, but, over time, things do improve. We have 80 percent fewer strokes and 75 percent fewer premature heart attacks than we did back in the 1960s. So, despite all the furor over the "sugar in research" article, we're still better off than we were back then. And anyone who thought sugar was safe would have been a friend of my father.