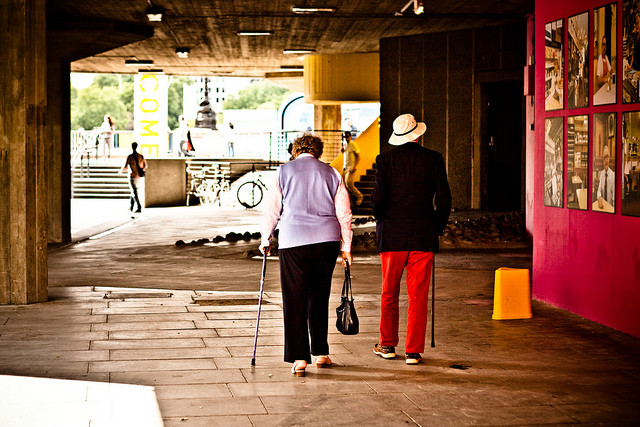 Why 900 Steps A Day May Be Magic Number For Older Adults
By Dr. Zorba Paster
Share:

If you’re working at a sit-down job, you’ll often only get to 2,500 or so by the time you get home. If you’re in your 20s without any home responsibilities, then there’s no excuse – just come home, change clothes and go to the gym, day in and day out. But when you have a family with kids and chores, then it can be a different matter.

The important question is: What’s the minimal number of steps you need to do each day to survive? I’m not recommending you couch potatoes shoot for the lowest number, but it’s a useful yardstick when it comes to the elderly who are sick and who are in or just out of the hospital.

A recent study out of the Journal of the American Medical Association addressed exactly this issue, looking at factors that predicted functional decline in nearly 200 older adult patients.

We know when you’re over the age of 65 and land in the hospital, problems multiply. One thing leads to another and the desire to get up and walk – whether it’s in the hallway at the hospital or back at home – seems to wane because you’re just too tired. The less you do, the less you can do.

So what’s the magic number? It appears to be 900 steps per day as the bare minimum.

Researchers looked at about 200 older adults hospitalized patients who had hospital-related functional decline; in other words, after they were in the hospital and came home, they got worse. If those folks walked less than 900 steps a day, 55 percent reported a continuing functional decline. They went downhill even more. But for those who walked 900 steps or more per day, only 18 percent reported further decline.

So you do the math: 55 percent vs. 18 percent. It’s clear just walking makes a difference, with 900 steps being the magic minimal number.

When it comes to exercise, there are other things that influence whether or not you do it. A recent article in the British Medical Journal showed after London was awarded the Summer Olympics, hosted there in 2012, more people started to exercise. It was inspiring.

The United Kingdom sold the idea of hosting the Olympics as being something that would inspire a generation of Brits to engage in healthy living and sports activity. A survey done a year after the London Games showed half a million more adults were exercising or playing sports than before the Olympics were held there.

Now, since that time the numbers have slid back a bit. But I think the take-home message is that if you and your social group make fitness part of your regular activity, you will end up doing more.

The challenge is bringing this idea to older adults, to people who are older and frail who might just be considered too weak to do anything. From the study above, you can see when you drop below that 900 number for daily steps, you’re headed in a downward spiral.

When I was a kid, sports and exercise were for the young. Older men maybe played golf and some played tennis, but most didn’t do much at all. I’m 69 – when I was in my 20s, I never imagined I would exercise like I do today. I thought that at age 69 you just let your body go to seed. You clearly don’t do that.

My spin: Take that older adult you know for a walk today – stroll the mall if you need some room indoors, or just make laps around the house if the weather is bad outside. Once the weather improves, get outside and walk.

The "just do it" mantra doesn’t apply only to the young and middle-aged, but to the older set, too. Stay well.