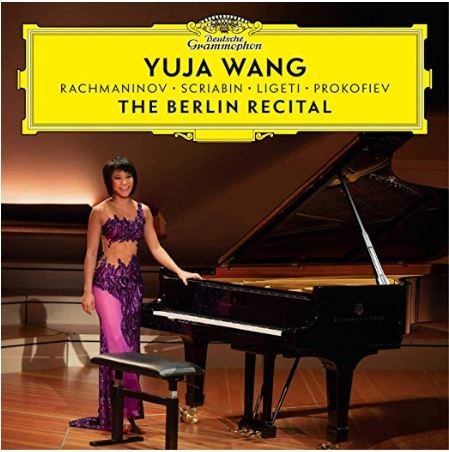 I've had the great fortune to enjoy Yuja Wang's artistry in person. Yes, she is a jaw-dropping technological marvel. Yes, her playing is unbelievably artful, moving and expressive. Yes, she brims with power and might; grace and revelation. And she puts on a compelling, eye-catching show.

That said, her prodigious gifts can also be experienced and enjoyed on the beautifully recorded new release "The Berlin Recital" from Deutsche Grammophon. The recital in question took place in the Berlin Philharmonie's Kammermusiksaal (Chamber Music Hall) in 2018.

The recital includes three etudes by 20th century Hungarian composer György Ligeti, but the rest of the music is Russian—four short pieces by Rachmaninoff and two piano sonatas: No. 10 by Scriabin and No. 8 by Prokofiev.

“Those Russian pieces have a way of bringing out every emotion, the nostalgic feelings in us all,” said Wang. “They make us feel really human. But at the same time, it’s as if they’re larger than life. They’re about something bigger than us, yet they’re also fun for an audience. And there’s a real difference between each composer, which is clear in the pieces in my new album. Prokofiev is so dark and so powerful and can be caustic and acid, edgy. Rachmaninoff is just pure romance, or a little jazzy – but not very sentimental. And Scriabin, of course, is a completely different world.”

Wang has received a well-deserved GRAMMY nomination for Best Classical Instrumental Solo for this recording; we'll find out how she fares in a few weeks.