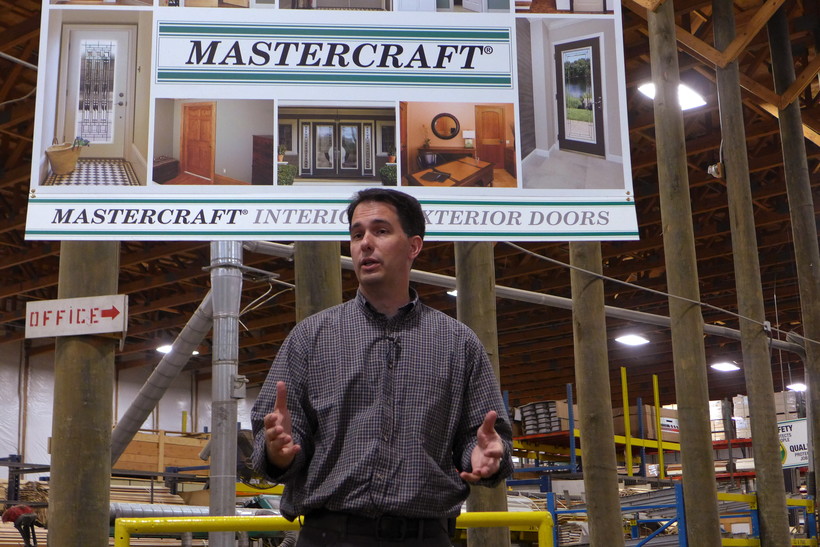 On the campaign trail in 2014, Gov. Scott Walker said claims that his re-election would lead to right to work were "absolutely wrong."

For Years, Walker Said He Wasn't Interested In Right To Work

Governor Now Says He Will Sign Right-To-Work Bill Should It Reach His Desk
By Shawn Johnson
Share:

It might feel a little like 2011 at the state Capitol, as unions gather to protest a fast-tracked right-to-work bill — a kind of legislation that Gov. Scott Walker spent years saying wouldn't be enacted under his watch, until recently, when he said he would sign it.

In Walker's 2012 recall campaign, right to work was suddenly a very hot topic. Democrats wanted to make the case that Act 10 was just the tip of the iceberg for the governor and that Walker would go after private-sector unions next.

Walker never promised to veto right to work, but speaking to the Milwaukee Journal Sentinel in April of 2012, Walker made it clear that Act 10 was about public-sector unions, and he would not pursue a right-to-work bill that banned mandatory union dues at private-sector businesses.

"From our standpoint, it's never going to get to me," said Walker. "The reality is — we've talked about this before — private-sector unions are my partner in economic development."

In May of 2012, the issue boiled up in a big way after a documentary surfaced showing Diane Hendricks, a major Walker donor, asking the governor about right to work and Walker doing little to dissuade her. When reporters asked about it at the state GOP convention, Walker was much more forceful.

"It's not going to get to my desk. I'm going to do everything in my power to make sure it isn't there."

Two years later, in his re-election campaign, right to work emerged as an issue in some Republican legislative primaries. Unions said that if Walker and Republicans won in November, it would "absolutely" lead to right to work in Wisconsin. When Walker was asked to react to that statement in September of 2014, he said: "Absolutely wrong, couldn't be more inaccurate. That's the kind of scare factor and distortion that they tried to put out before."

Even after the election, Walker said right to work would be a distraction from his agenda. But once Senate Majority Leader Scott Fitzgerald announced that the Senate would pass a right-to-work bill, it took Walker just a few hours to announce that he would sign it.

It's a far different approach than Walker took with Act 10, but this has all played out before — not in Wisconsin, but in Michigan, with its Republican Gov. Rick Snyder.

Snyder, like Walker, said repeatedly that right to work was not on his agenda. But when Michigan's Republican legislative leaders made it clear they would pursue right to work, Snyder changed his tone.

"When it arrives on my desk, I plan on signing it," he said. "We've had a lot of good discussions on this topic, healthy discussions, and I think this is what's best for Michigan."

Michigan Public Radio's Rick Pluta covered that debate and the protests it spawned. A lot of what Pluta describes sounds like it could have happened in Wisconsin in the runup to Act 10: a big, impassioned, loud, sustained demonstration in which protesters filled the Capitol's rotunda, hallways and lawn.

"There were times when pepper spray was used to try and push back the protesters," said Pluta. "And in one particular case, pro-right-to-work group Americans for Prosperity hired a hot dog vendor, and they set up a tent in the middle of the Capitol lawn. And the tent was torn down and the vendor's hot dog cart was destroyed."

Despite the energy and the anger, Pluta said Michigan Republicans did not pay a political price over right to work, probably because these days, most people don't belong to a union. That's even more true in Wisconsin, where union membership took a substantial hit after the last labor battle four years ago.