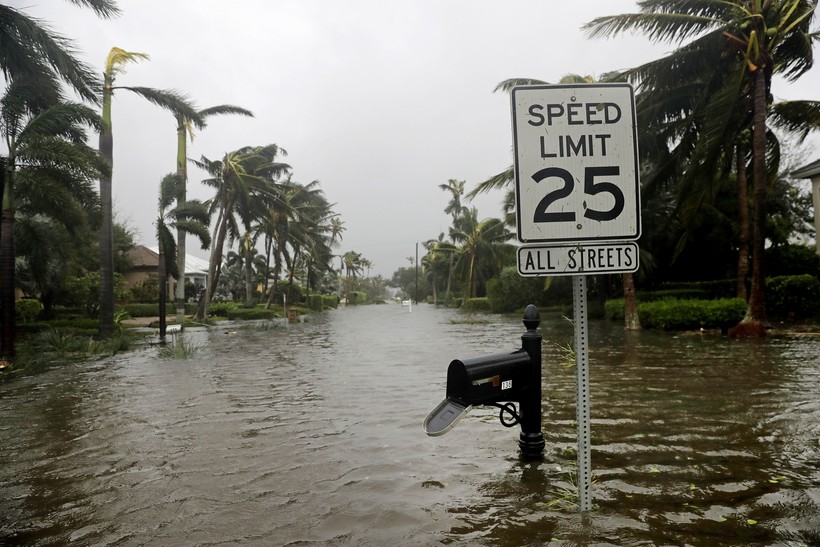 A street is flooded near the ocean after Hurricane Irma passed through Naples, Fla., Sunday, Sept. 10, 2017.

Hundreds of Xcel Energy volunteers from Wisconsin and more than a-half dozen other states are arriving in Florida to help restore power lost as Hurricane Irma batters the state.

Nearly 4.5 million homes and businesses across Florida lost power, and utility officials said it will take weeks to restore electricity to everyone. Some of the 40 volunteers from the Eau Claire area gathered at Xcel offices Sunday to begin their journey south. The volunteers hope to begin work early this week and plan to stay 10 to 14 days, but longer if necessary.

Irma's center was about 60 miles north of Tampa early Monday, though in a much-weakened state. According to the U.S. National Hurricane Center, Irma is expected to become a tropical storm later Monday.

Members of the Wisconsin National Guard will also head to Florida to help with the recovery from Hurricane Irma.

Officials said Sunday that more than 2,500 Wisconsin Guard troops will go to Florida.

Gov. Scott Walker said Wisconsin "stands ready to help our friends in Florida" who are bracing for Irma, one of the strongest Atlantic Ocean storms on record.

The Guard's mission will be determined when members arrive in Florida, but may include rescuing people trapped by floodwaters, preventing injuries and protecting property.

Among Wisconsin Guard units heading to Florida is the entire 32nd "Red Arrow" Infantry Brigade Combat Team, the largest unit in Wisconsin with soldiers across the state.