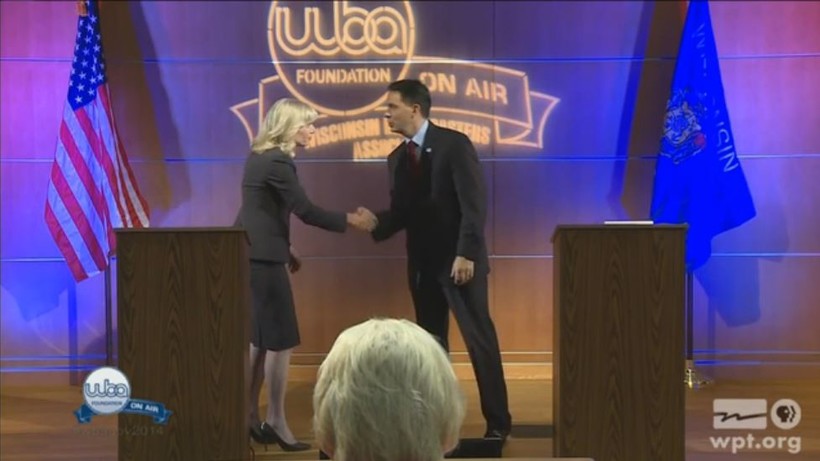 Among Likely Voters, Walker Leads 47 Percent To 46 Percent But Within Margin Of Error
By Erik Lorenzsonn and Laurel White
Share:

The new Wisconsin Survey from Wisconsin Public Radio and St. Norbert College's Strategic Research Institute finds that while the gubernatorial race is very close, Gov. Scott Walker has a slight edge over Democratic challenger Mary Burke — but within the poll's margin of error.

Walker polled at 47 percent to Burke’s 46 percent among survey respondents who self-identified as “likely voters,” with 6 percent still undecided. Among all voters surveyed, Walker leads 46 percent to 43 percent, with 11 percent undecided.

Both leads fall within the poll’s margin of error of plus or minus 4 percent.

“Six percent of people who are likely voters are still not sure for whom they're going to vote,” said Wendy Scattergood, a St. Norbert College political scientist. “So, with a 1 percent difference between the candidates on vote choice and then a 6 percent 'not sure' of likely voters, then there's still room for candidates and groups to get those undecided voters.”

The results align with other polls that show a close gubernatorial race, including a Marquette University poll released last week that found Walker and Burke tied at 47 percent among likely voters.

Voters participating in the Wisconsin Survey were asked why they supported either candidate. The majority of respondents supporting Walker said they do so because they “like him” or his values, while other Walker supporters said that they specifically like his budgetary policies. The majority of people supporting Burke said they support her because they dislike Walker, Walker’s policies, or Republicans.

The survey also polled voters on the attorney general race between Democratic Jefferson County District Attorney Susan Happ and Republican Waukesha County District Attorney Brad Schimel. It found that Schimel leads Happ 41 to 40 percent among likely voters, and 43 to 36 percent among registered voters, with 21 percent of voters undecided. Both leads are within the poll's margin of error.

The latest Marquette poll also showed that Happ and Schimel are in a close race, with each polling at about 42 percent among likely voters.

Moving past electoral politics, Walker’s approval rating in the new Wisconsin Survey is was found to be around 48 percent, meaning that a spike in approval the governor enjoyed in last spring’s survey — in which Walker’s rating was pegged at an all-time high of 59 percent — has dissipated. In fact, more voters — 49 percent — were found to disapprove of his performance than approve of it in the new poll.

The poll also found that 51 percent of respondents think Wisconsin is headed in the “right direction,” while 54 percent said that the state is in good economic condition.

St. Norbert College surveyed 603 Wisconsin residents between Saturday and Tuesday over landline and mobile phone connections to conduct the poll. About 33 percent of the respondents identified as Republican, another 33 percent as Democrat, and 28 percent as Independents.

Clarification: The original version of this article said that the Wisconsin Survey found Brad Schimel leading Susan Happ 43-36 percent in the race for attorney general. Those numbers are accurate among all voters surveyed. Among respondents who self-identified as likely voters, Schimel leads 41-40 percent. Both of those leads are within the margin of error.