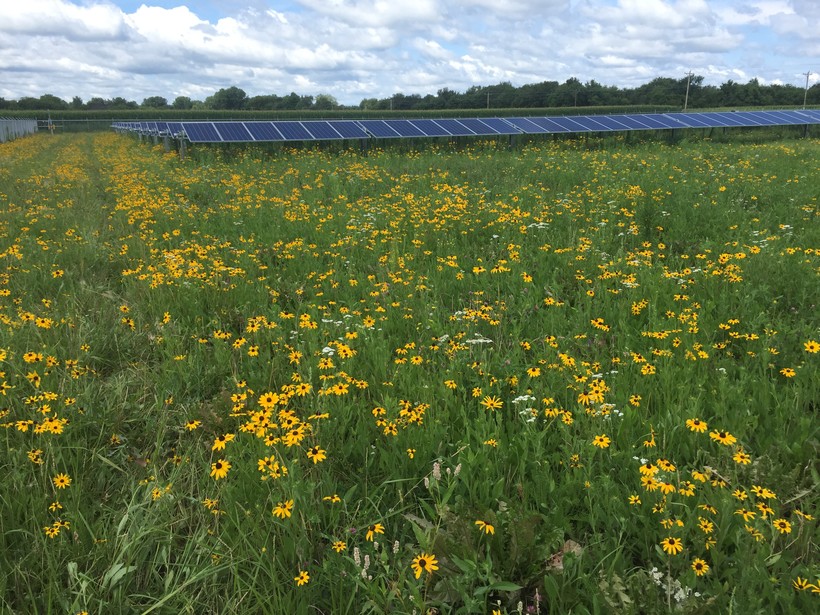 A solar farm near Downsville with a flowering meadow under and around the panels. Organic Valley will build and seed pollinator-friendly solar farms, like this one near Downsville. Photo courtesy of Prairie Restorations, Inc.

Ten communities in Wisconsin will be purchasing power through a new solar energy partnership with Organic Valley.

The farmer cooperative first announced the community solar partnership with the Upper Midwest Municipal Energy Group and OneEnergy Renewables last fall. Organic Valley plans to purchase around 12 megawatts of power through the partnership in order to become powered solely by renewable sources.

Jonathan Reinbold, head of sustainability for Organic Valley, said the addition of natural soap brand Dr. Bronner's and the city of Madison to the partnership helped expand the project to a total of 31 megawatts.

"Overall, the state will see a 33 percent increase in solar. So it’s really massive growth for one project, especially for a project that’s distributed in mainly different rural communities," Reinbold said.

OneEnergy Renewables will build 10 solar arrays, with seven in Wisconsin, two in Minnesota and one in Iowa. Thirteen communities have agreed to buy the power from the new arrays, while Organic Valley, Dr. Bronner’s and the city of Madison have purchased the credits for that renewable energy.

Renewable energy certificates, or credits, represent the property rights to power produced by a renewable source. While the power produced by the new arrays will be used by local utilities, Organic Valley and the other partners will receive the credit for generating that power.

One of the new solar arrays will be located in Arcadia. Tim Putz, superintendent of the electric utility in the city of Arcadia, said the partnership was a good fit for the community.

"We didn't need the renewable energy credits because we get more than what we need off a wind farm in North Dakota that we have a contract with," Putz said. "The attractive part of it to us was just another part of our wholesale power supply portfolio."

Putz said Arcadia also buys wind energy from Organic Valley’s wind turbines in Cashton. Combined, the utility gets 20 percent of its power needs through wind energy and it purchases the remaining 80 percent from Dairyland Power Cooperative at the market price.

While energy prices are currently low, Putz said they’ve been more costly in the past and he expects prices to increase in the future.

"(This solar energy contract) helps us flatten out the ups and downs of the market. So that's a big attraction to us and we know what the price is for the entire life of the contract," Putz said.

Putz said the new solar project will provide 10 percent of the Arcadia’s power needs. At 6.78 megawatts, it’s projected to be the largest array in Wisconsin.

Reinbold said it took all of the partners coming together to make the project a reality.

"The financial commitment from Organic Valley and the financial commitment form the utilities to buy the power needed to go hand in hand to make them financially viable," Reinbold said. "Without someone like Organic Valley or Dr. Bronner’s or the city of Madison to commit to purchase the renewable energy credits, these projects wouldn’t be built and then that power wouldn’t be available for those municipal utilities."

Reinbold said OneEnergy Renewables hopes to break ground on the new arrays next month and all of the arrays will be in place by June 2019.