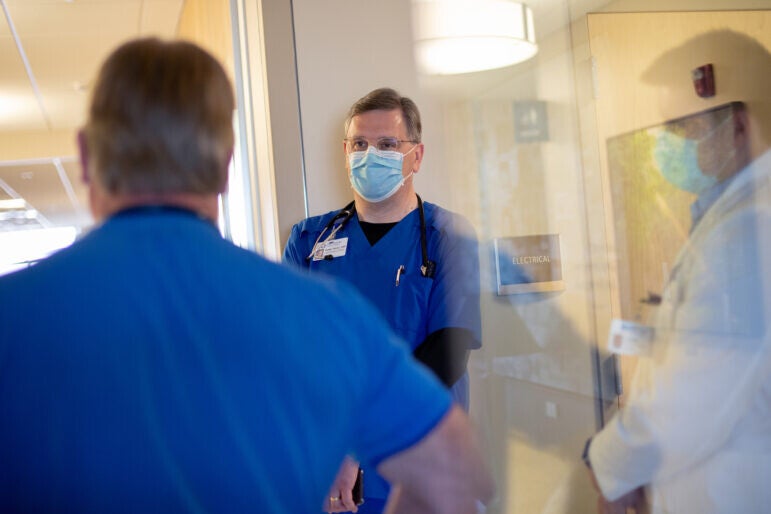 Rural Hospitals Across US Struggled After Routine Care Was Suspended; Now Disease Is Surging In Rural Wisconsin
By Parker Schorr
Share:

Wisconsin’s rural hospitals are faring better than in most states. But a significant number — roughly one-third — remain underwater financially.

And if rural residents continue to ignore the statewide mask order and fail to engage in social distancing, the COVID-19 surge that is swamping many urban hospitals in Wisconsin could also overwhelm rural health care facilities, said Tim Size, executive director of the Rural Wisconsin Health Cooperative.

Citing White House data, Size said Wisconsin’s rural counties are doing among the worst in the country in terms of infection.

In these areas, "It’s not unusual to go into a gas station or a store and no one is wearing a mask," Size said. "We need help from the public to get through this (pandemic) — and that help has been mixed."

Door County Medical Center, a small, 25-bed hospital serving 30,000 people across Door and northern Kewaunee counties, is one of the hospitals that is surviving the pandemic in reasonably good shape. The medical center in Sturgeon Bay is designated as a critical access hospital, allowing it to receive additional Medicare reimbursement to ensure that essential health care services continue to be offered in rural areas.

As of Oct. 7, the hospital had treated 16 patients with COVID-19 in "The Cove," the hospital’s four-bed ICU unit, said Chief Medical Officer Dr. James Heise. The first three patients died.

"It was a real learning curve," said Heise, whose hospital has now seen four deaths from the pandemic. "At the time we didn’t know how this was going to play out."

The hospital had a "surge" of patients in early October, Heise said in a recent Facebook Live update. And while it remains busy, including with non-COVID-19 patients, "We’re not full — don’t sweat that," he said. 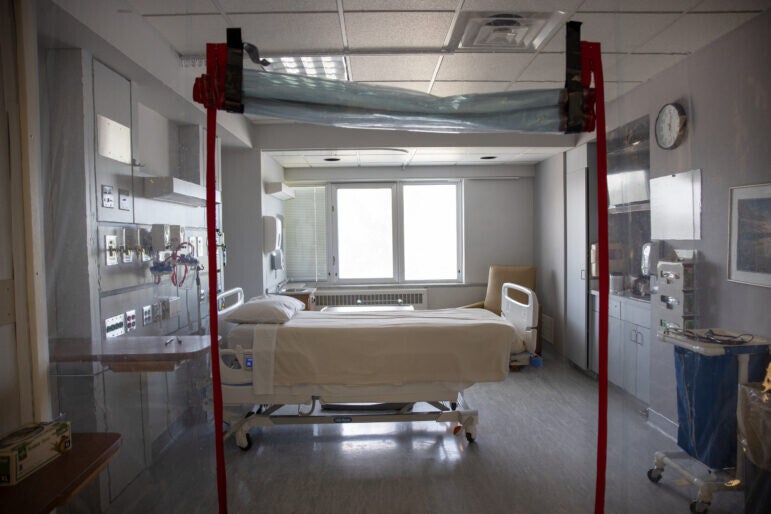 A room in the intensive care unit dubbed "The Cove" is where Door County Medical Center in Sturgeon Bay, Wis., has treated its handful of COVID-19 patients. The hospital added anterooms so the staff can unzip the outer doors and change into and out of protective gear. Photo taken Aug. 5, 2020. Coburn Dukehart/Wisconsin Watch

CEO Brian Stephens said the medical center has sent some COVID-19 patients to Green Bay, but only because of their underlying health conditions.

Despite taking a $10 million hit in revenue between March 18 and May 31, when elective procedures and many face-to-face appointments ceased, the hospital brought in more revenue this June than in June 2019, Stephens said. And federal pandemic funds for rural hospitals have erased most of these losses, he said.

Small, rural hospitals — critical access hospitals with 25 or fewer beds — in the United States have reported similar summer boosts, thanks to programs offering health care providers more than $310 billion in federal stimulus money, according to an investigation by Reveal from the Center for Investigative Reporting and members of the Institute for Nonprofit News, including Wisconsin Watch. 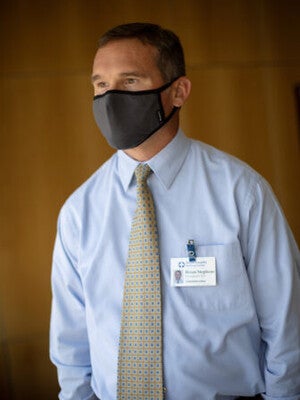 It isn’t expected to last.

That’s because of how poorly many of the small hospitals fared financially before the epidemic, hospital officials in several parts of the country said in interviews.

The Sturgeon Bay medical center received $6.9 million in federal pandemic-related relief. It also is eligible to borrow $8 million as part of the Accelerated and Advanced Medicare Payments program. Stephens said the hospital has not had to dip into any of those funds yet. In addition, a local foundation has raised $300,000 for the health care system during the pandemic, he said.

"I think we maybe are in a better situation than most rural facilities, but I think all the rural facilities, in Wisconsin anyway, probably came through this OK and are now back to where they're doing elective surgeries and clinic visits and those sorts of things that generate the revenue we need to stay open and do all the other things we do," Stephens said.

He said the federal CARES Act funding for rural facilities was based on the size of the hospital, and Door County is one of the larger critical access hospitals. 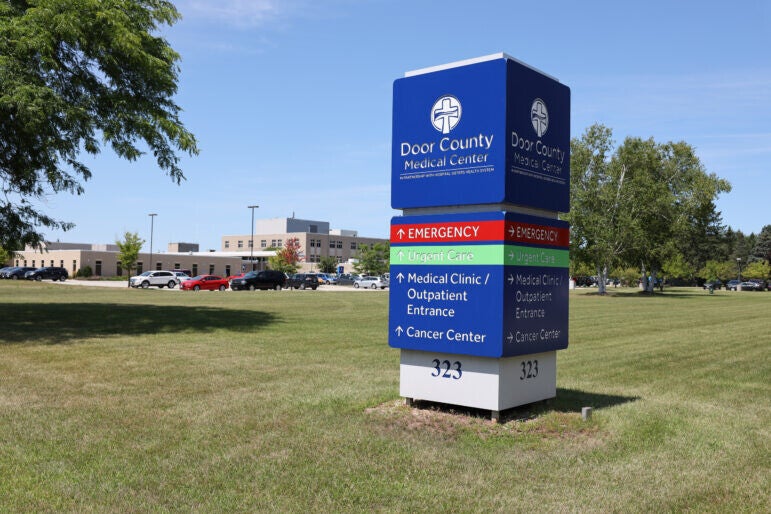 The facility was in a good position to weather the storm in large part because it has invested in outpatient surgery, Stephens said — a highly profitable service that is also essential for the retirees who make up a large portion of the population in this scenic peninsula surrounded by Lake Michigan.

"The types of things that people are coming to see us for … aren’t going to go away just because of COVID," he said.

Despite the infusion of $2.8 billion in federal grants and loans to keep hospitals and health care facilities in Wisconsin afloat — and millions more on the state level — many remain in precarious financial situations.

The pandemic should cause federal lawmakers to refocus their attention on the fate of rural health care, said Michael Topchik, national leader of the Chartis Center for Rural Health, a Chicago-based consulting group.

Pointing to pieces of legislation long been stalled in Congress, Topchik said, "It may be time to address, and perhaps redress, some of the systemic challenges that are pushing rural hospitals to the breaking point."

According to a Wisconsin Watch analysis of American Hospital Directory data, 38 percent — or 29 of Wisconsin’s 75 rural hospitals — had a negative operating margin in their most recent financial statements.

Wisconsin is unique in that it partially expanded Medicaid under then-Gov. Scott Walker, a Republican. 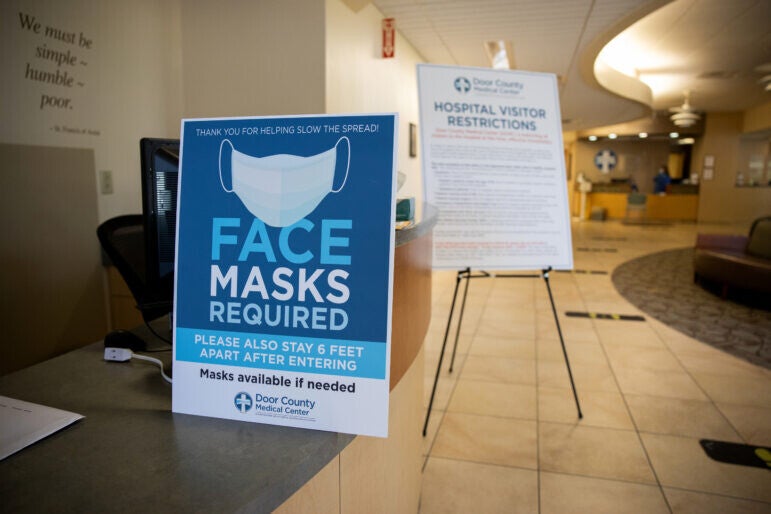 Patients and visitors entering the lobby of the emergency department at Door County Medical Center in Sturgeon Bay, Wis. are instructed to wear masks to curb the spread of COVID-19. Photo taken Aug. 5, 2020. Coburn Dukehart/Wisconsin Watch

Smaller state programs distributed additional tens of millions of dollars to hospitals, including $40 million to cover losses in March, April and May.

That means federal funds nearly equal the state’s lost revenues — although most of that money will have to be repaid with interest. And losses continue to pile up even as non-urgent services have resumed, Grapentine said.

The Chartis Center predicts hospitals will see a 20 percent decline in patient volume — and therefore revenue — for the foreseeable future. Topchick said would-be patients might opt to videochat with their doctor or delay care altogether.

"Frankly, if rural hospitals were to lose 20 percent of their outpatient volumes, it would be untenable for a huge number of them," he said. "They would simply collapse under their own weight of their cost structure."

State Hospitals 'Holding Their Own'

Wisconsin’s rural hospitals historically have fared better than those in other states, Size said, owing to stronger rural economies, a market dominated by mission-driven non-profit health systems and a strong tradition of cooperatives, collaboration and integration between hospitals. Rural hospitals will be more resilient during the pandemic for these reasons, he said.

The financial health of rural hospitals varies, Size said. Some of the cooperatives' members are already back to their pre-pandemic revenue levels, he said, and others are on the right track.

Still, some hospitals have been running negative margins and eating into their cash reserves, Size said. And sharply rising infection levels in areas such as northeastern Wisconsin are worrisome, he said, noting that all hospitals, including Door County Medical Center, have seen costs balloon as they prepare and staff up for a surge of COVID patients.

Size said he would be "thrilled" if they make it through the pandemic without a hospital closure — a bullet Wisconsin has largely dodged. Only one rural hospital has closed in Wisconsin since 2011.

The more concerning issue at hand is the damage the virus might bring upon the fragile financial health of rural communities, which have yet to fully recover from the Great Recession, Size said. Widespread farm bankruptcies and poorer population health reflect "an ecosystem that is precarious."

"Our hospitals are holding their own, but they are only as strong as their communities," he said.

No one knows what impact another wave of infections could have on the state’s rural hospitals, he said, adding, "If the hospital has to shut down again, that could be devastating."

Iowa Watch reporter Lyle Muller and Wisconsin Watch’s Coburn Dukehart and Dee J. Hall contributed to this report, which is part of a collaboration of Institute for Nonprofit News members and Reveal from the Center for Investigative Reporting examining the effect of COVID-19 on rural health care. The Solutions Journalism Network provided funding for the reporting. The nonprofit Wisconsin Watch (wisconsinwatch.org) collaborates with Wisconsin Public Radio, PBS Wisconsin, other news media and the UW-Madison School of Journalism and Mass Communication. All works created, published, posted or disseminated by the Center do not necessarily reflect the views or opinions of UW-Madison or any of its affiliates.