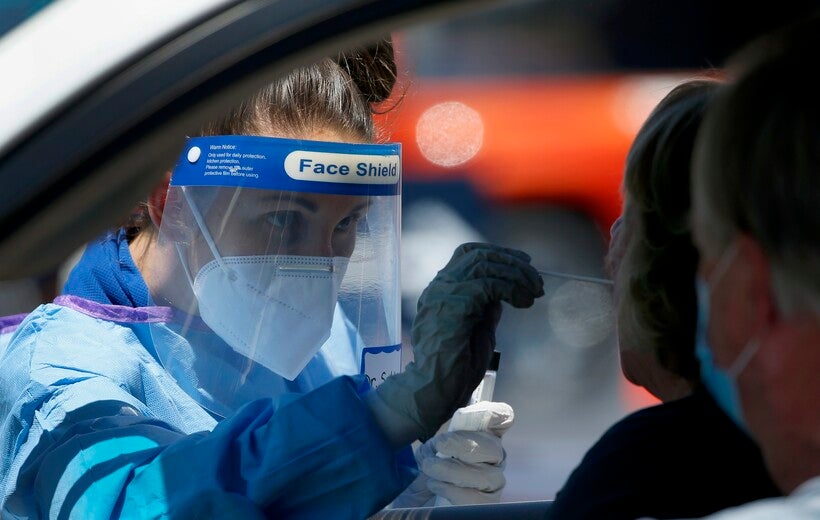 Dr. Sabrina Solt conducts an appointment-only coronavirus drive-thru COVID-19 swab test in the parking lot at Impact Church, Monday, May 4, 2020, in Scottsdale, Ariz. The two-day testing site for both the coronavirus and the antibody test was made possible by a partnership with Arizona Cardinals' NFL football player Jordan Hicks and Impact Church and is hoping to test 500 people. Ross D. Franklin/AP Photo

Friday Sees No New Deaths From COVID-19 In Wisconsin
By WPR Staff
Share:

There have been 26,747 positive cases of COVID-19 in Wisconsin as of Friday, according to the state Department of Health Services. That's an increase of 520 cases from the day before.

According to health officials, Friday saw no new deaths from COVID-19, keeping the statewide total at 766 people who have succumbed to the virus.

DHS reported 507,168 total negative tests for the coronavirus, an increase of 8,607 from Thursday to Friday.

Seventy-nine percent of people who have tested positive for the virus in Wisconsin have recovered as of Friday, according to DHS. Three percent have died.

Wisconsin's daily testing capacity — based on the availability of test supplies and adequate staffing — has grown from 120 available lab tests in early March to 18,425 as of Friday. The number of actual tests reported on Friday was 9,127.

An increase in testing is one reason for the increase in the number of positive cases. The percentage of positive tests increased to 5.7 percent on Friday — the highest it's been since May 29 when it was 5.4 percent.

On Wednesday, DHS launched a new data dashboard that looks at COVID-19 activity on a county and regional level. That dashboard shows that 22 counties in the state have a "high" COVID-19 activity level — a designation based on a county's number of cases per 100,000 residents over the past 14 days, and the extent to which that case rate is increasing.

La Crosse, Trempealeau, Milwaukee, Lafayette and Winnebago counties have the highest case rates in the state, all with over 100 cases per 100,000 residents reported over the past two weeks. Seven counties, including La Crosse and Milwaukee, have seen a statistically significant rise in their case rate over that same time period, based on DHS analysis.

There have been confirmed cases in all 72 of Wisconsin's counties, although according to the latest COVID-19 activity data, eight counties recently had a two-week stretch with no new reported cases.